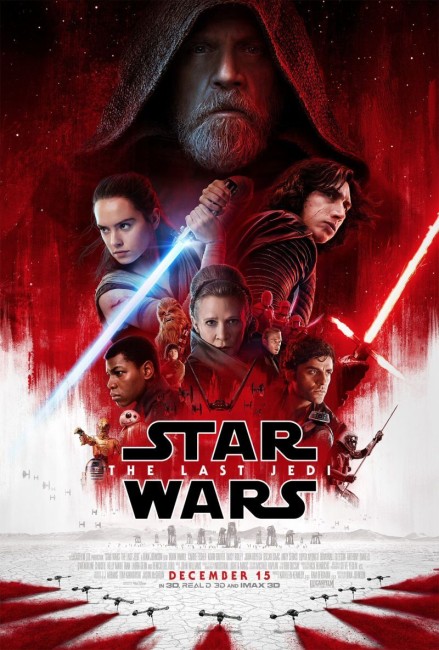 Rey has found Luke Skywalker in reclusion on the remote planet Ahch-To. However, she finds a Luke who is burned by the way his pupil Kylo Ren was seduced by the Dark Side and wants nothing more to do with the Jedi ways. Rey refuses to go and stays, imploring Luke’s help. Meanwhile, the Resistance fleet under the command of Leia Organa flees, hotly pursued by the First Order. A near attack leaves Leia in a coma. Finn and maintenance technician Rose Tico realise that the First Order is able to track them through hyperspace and come up with a scheme to disable the First Order’s tracking device. However, this involves conducting an unauthorised side-mission to the casino world of Canto Bright to get the services of a master codebreaker in order to get through the First Order’s shields. Meanwhile, Kylo Ren discovers that he is in telepathic contact with Rey. Captured by him, Rey believes he is redeemable and can be turned against the First Order’s leader Snoke. Meanwhile, the Resistance fights a desperate battle for survival as The First Order whittles their numbers down.

The Last Jedi comes from director-writer Rian Johnson who had previously gained critical acclaim with the high school film noir pastiche Brick (2005) and the conman film The Brothers Bloom (2008). Although the work that almost certainly had Johnson selected here was the fine time travel film Looper (2012). Johnson also has the dubious distinction of being the first director of one of the Disney Star Wars films (other than J.J. Abrams who gets a pass because he is executive producer) not to be fired, replaced or have control of the film taken away from them during or after completion of shooting.

The Force Awakens relied far too heavily on Star Wars. Equally, The Last Jedi often feels like it is the Disney trilogy’s attempts to rehash The Empire Strikes Back. There seem to be far too many overlaps. A plot where a young apprentice goes seeking training from the reclusive Jedi master on a remote planet. The rebels pursued by the Empire. Parties seeking refuge on a planet where the person they place their trust in ends up betraying them. The climactic showdown on Crait with the Walkers advancing on the rebel base echoes a little too much the scenes on Hoth at the opening of Empire. The showdown with Snoke also feels like a rehash of the climax of Return of the Jedi. If nothing else, you have to commend The Last Jedi as being the first sequel since Empire, with the exception of The Phantom Menace, not to have to have the Death Star or some facsimile present as a plot device.

On the other hand, there is much to commend about The Last Jedi. The Force Awakens seemed a half-hearted attempt to revisit Star Wars. Johnson feels determined to do something fresh and original – he gives us a space battle straight out of the starting gate and that is invigorating enough to get the show going. Most of the Star Wars sequels seem stuck for coming up with original moves and keep doing minute variations on what has gone before – lightsabre duels with two opponents, combatants wielding two lightsabres and so on.

Here the scenes with the animal stampede through the casino, while somewhat reminiscent of the dinosaur stampede in King Kong (2005), are an invigorating and original addition to the action scenes of the series. The lightsabre duels in Snoke’s throne room are exciting because Rian Johnson plays to the tension between the characters rather than just showing people crossing lightsabres – I found this as a far dramatically superior sequence to the climactic scenes in Return of the Jedi that it has been modelled on. Not to mention, Johnson makes a point of subverting the expectation that this is going to turn out to be another “I am your father, Luke” scene. The climax of the film with Luke and Kylo facing off across a white plain and red skies in front of a line of parked Walkers is great cinema whichever way you look at it.

Equally, it feels as though Rian Johnson is taking the hand that Abrams has dealt him and trying to do the best he can with it. I don’t think Kylo Ren was a particularly well conceived character in The Force Awakens but Johnson seems determined to do something with him. The emotional core of the film is the question of Kylo’s redemption – whatever you want to think about Kylo Ren as a character, you cannot deny that the film does a captivating job of writing his story arc. You feel that this is what the prequels should have been about and Rian Johnson is finally making up for the limp washout of a character that Anakin Skywalker ended up being.

I also commend Rian Johnson as a far better director than both George Lucas and J.J. Abrams who are both perfectly capable of creating dazzling action scenes but seem to care less about the characters or actors. You feel that as a director Johnson is far better at stopping in the midst of the action and showing what the characters are thinking and feeling. The only criticism I would make of The Last Jedi is that while The Force Awakens did a fine job of introducing the characters of Rey and Finn, here they are relegated to supporting players to the main action. There are few scenes here when you can say their stories develop from what we saw in The Force Awakens.

Rian Johnson also comes preciously close to taking The Last Jedi out of the fantasy bubble it exists in and into the real world. The scenes on Canto Bright contains some striking lines that delve into real world politics and start to attack the world of social privilege based on weapons manufacture and sales and contain a liberating series of scenes where Finn and Rose Tico free the animals and imprisoned children. The final scene of the film that focuses on one of the children as they look up at the sky in hope feels like one of the first of the Star Wars films where The Resistance is less a plot element than one that seeks the revolutionary ideal.

The Last Jedi is very much a film about passing the mantle to a new generation. Between Episodes VII and VIII, we now have the two main heroes of the first trilogy killed off. Ironically, the only main character from the original trilogy still left alive, aside from the droids and Chewie, is Princess Leia (although the subsequent film Rise of the Skywalker did drag the supporting characters of Palpatine and Lando out of mothballs). While the series has killed off the characters played by the still-living Harrison Ford and Mark Hamill, it seems with a certain irony that the only human character from the original trilogy left alive is played by the one actor who has died in the real world – Carrie Fisher. (In a no doubt symbolic move, the very first line in this film comes from Fisher’s own daughter Billie Lourd). The Last Jedi ends with all that is the old series wiped away – all trace of the Resistance crushed, the Jedi wiped away – but with the seeds of the new planted as Rey looks to inherit the lightsabre as the new Jedi and the Resistance having to rebuild all over anew.

It would probably be an understatement to say that The Last Jedi divided Star Wars fans more than anything since well George Lucas’s prequels. I am not a hater here but then I am no longer as much the fanatical Star Wars fan I was when I saw the first film in theatres as a kid. More than anything, Lucasfilm’s inundation of merchandise started to make me feel “meh” about the ongoing efforts to market more and more from my original enjoyment.

Variously, the fans leapt upon issues of continuity such as people manifesting new aspects of The Force – Luke’s intergalactic hologram broadcast, Rye and Kylo’s telepathy. I felt like I could not have cared either way – for me, it makes for an engrossing story and a great climax. The one absurd issue for me was the Space Leia scene – it was something the film didn’t need that could not have been served by something simpler like having her injured by an explosion. The other credibility issue for me was having some as emotionally impetuous and unstable as Kylo Ren instantly being able to take full command of the First Order’s troops.

Rian Johnson subsequently went on to make the whodunnit Knives Out (2019).