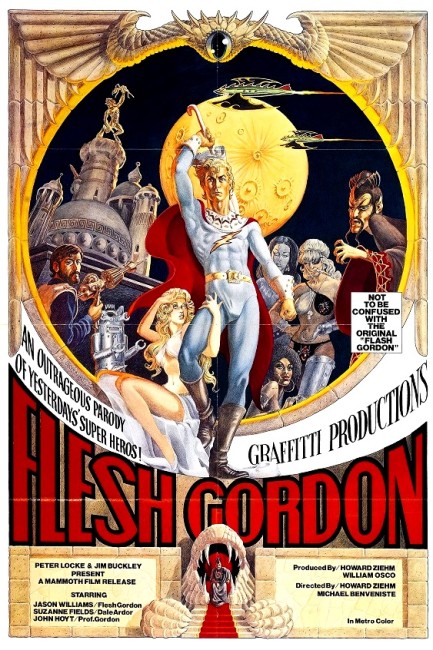 Flesh Gordon brought out all the sexual undertows and Freudian symbolism inherent in the Flash Gordon comic-books and serials, which consisted of Flash Gordon (1936) and its two sequels Flash Gordon’s Trip to Mars (1938) and Flash Gordon Conquers the Universe (1940). The old accusations of rocketships as phallic symbols are confirmed – here the rocketship is shaped like a giant penis and its emergence from its hangar looks exactly like a dick emerging from a zipper. The best thing in the film is the stop-motion animated temple monster, which becomes an explicit parody of King Kong (1933), muttering “Rip her clothes off” in a doleful voice as it snatches up the heroine.

Despite such moments of invention, Flesh Gordon often seems belaboured. The rest of the time the film is merely trying to find ways to conduct softcore simulations of every aspect of the original serials. (The script follows the 1936 Flash Gordon surprisingly closely). It gets very silly with Prince Barin being rewritten as a foppish gay man and scenes where Whang disposes of the heroes by flushing them down a giant toilet. The ghastly hamming of co-writer William Hunt as Emperor Whang is the film’s low point.

There is a small cult that exists for Flesh Gordon in some quarters, which seems to rest primarily on the professional quality of the effects. Flesh Gordon is perhaps notable for featuring many effects artists who went on to find considerable fame in better films – among the credits, one can see Oscar-winning makeup effects artist Rick Baker, stop-motion animators Dave Allen and Doug Beswick, Dennis Muren who became one of the founders of Industrial Light and Magic, model-maker Greg Jein who built the mothership in Close Encounters of the Third Kind (1977) and stop-motion animator Jim Danforth hiding under the pseudonym Mij Htrofnad (the reverse spelling of his name).

Co-director Howard Ziehm later made a sequel Flesh Gordon Meets the Cosmic Cheerleaders (1991). William Hunt was the only other returnee from the original.