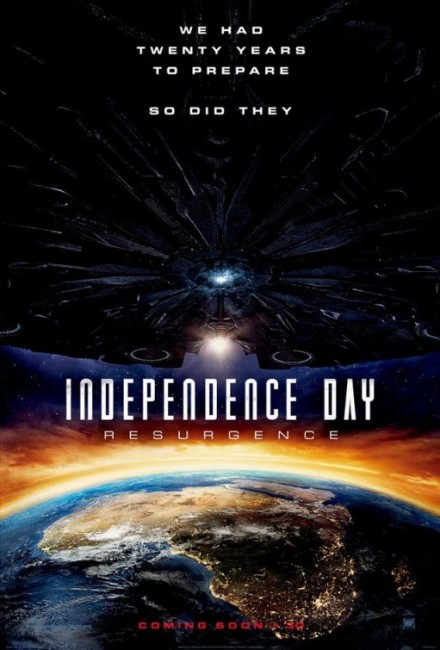 It is twenty years after the alien invasion of Earth was defeated. In the interim, the Earth has united, while the alien technology has been reverse-engineered and used to enhance Earth technologies. A defence installation has been built on The Moon in the event of further attack. In Africa, David Levinson, who is now the director of Earth Defence Forces, travels to meet the warlord Dikembe Umbutu who has a landed alien ship on his territory that has now suddenly come back to life. A new alien ship appears above the Moon and is promptly shot down by the military, despite David’s warnings. A mysterious sphere is discovered inside and is found to be from a different alien race, come to warn about the invaders. This is followed by the appearance of an alien ship three thousand miles wide that brushes off Earth defences and lands on Earth, causing mass devastation in its wake. It is realised that the newly arrived alien ship is drilling down to the Earth’s core in an effort to extract it. Various parties gather near Area 51 to find a means of fighting back by killing the queen at the centre of the alien ship.

The millennials don’t quite grasp how big Independence Day (1996) was back in its day. It was the No 1 grossing film of its year, the sixth highest grossing of the 1990s. It put Roland Emmerich on the map and permanently associated him with the disaster movie; it made Will Smith into a box-office star. It was also the first of the CGI epic disaster spectacles. There had been other hits such as Terminator 2: Judgement Day (1991) and Jurassic Park (1993) in preceding years but it was Independence Day that gave us the CGI movie as epic disaster spectacle. That it seems somewhat the lesser today is because, unlike a comparable work like Jurassic Park, it has not been multiple sequelised or reissued in 3D.

Independence Day was the brainchild of German director Roland Emmerich and his writing partner Dean Devlin. (See below for their other films). Their objective was simple – to take the 1950s alien invasion film, dress it up with top-drawer special effects and write it in big bold, simplistic audience-pleasing cues. It was something that worked for them and connected with audiences. I can’t say I liked Independence Day much. It was just that – mindless large mass destruction, easy emotion-tugging heartstrings and an appeal to patriotic red-bloodedness that completely switched me as a non-American off.

Here Emmerich and Dean Devlin return to the familiar. They have been promising to do so for several years now – in what has been announced as not one but two sequels, the second of which is clearly announced by the way the end of the film here is left open. It may be that Emmerich needs to do so. While throughout the 2000s, a number of his massive mass destruction spectaculars have been hits – The Day After Tomorrow (2004), 2012 (2009) – there are just as many that have not – 10,000 BC (2008) and, in particular, Anonymous (2011), White House Down (2013) and Stonewall (2015), the latter of which failed to even achieve widespread theatrical release. (It should be noted that all of these films that have failed to go anywhere have been ones where Emmerich strayed from big budget mass destruction spectacle and tried to do something different). As Independence Day: Resurgence goes into release, Emmerich has also announced his intentions to rework his earlier Stargate (1994), suggesting that he has now chosen to retreat to the commercial safety of the familiar.

It is no particular surprise to say that in Independence Day: Resurgence, Ronald Emmerich gives us exactly what we expect – but more of it. We get more mass destruction and landmarks being trashed; Emmerich ups the scale to give us an alien ship that is not just a mile or so across but three thousand miles; we get more bad science – a Moon without low gravity, sound that travels in a vacuum; all the requisite blood-stirring calls for heroes fighting back, never giving in and so on; there are scenes that engage in simplistic tugging at the heart-strings – like Judd Hirsch driving a bus of school children who are written in for no other purpose than to travel right into the danger zone at a critical dramatic juncture, not to mention a cute dog that has to be retrieved rather than left behind.

Twenty years difference has also wrought some changes, although not as much as you might think. Emmerich played Independence Day for all the flag-waving patriotism he could; it almost felt like a call to the national glory-seeking of the wars that the US fought in the Middle East in the 2000s (and we all know how those went). Somewhere after The Patriot (2000), Roland Emmerich discovered liberalism – The Day After Tomorrow joined the Global Warming bandwagon; 2012 was a disaster movie that fought for social all-inclusiveness and spurned elitism; while Stonewall is a film about the beginnings of the real-life US gay rights movement.

Of course, in the interim, Emmerich has also developed a healthy competitor in Michel Bay who has fairly much overtaken the market for mass destruction accompanied by US flag-waving nationalism. Thus Independence Day: Resurgence avoids any political message-making (although the whole core extraction plot has been read as an anti-fracking message) and expands the stage of the story out to be about a united Earth rather than the United States fighting back. The complement of personnel is notedly now more international and includes characters that are French and Chinese (all part of the pandering to the Chinese market that any current blockbuster must now make) and most bizarrely the inclusion of a Central African warlord as one of the heroes (not exactly a group that are known for their cuddly heroism, which is what he is promptly put to).

On the other hand, Independence Day: Resurgence is rather dull. Emmerich is stuck with the problem of how to keep topping himself. And when your films consists of the Earth being destroyed on a regular basis, it gets harder to keep progressively upping that. The alien ship here is so big that all of it cannot be fitted into the frame. There are mind-bogglingly scaled scenes with the alien ship coming in for a landing, ploughing everything in its path or sucking up every loose object in the vicinity and dropping it again (quite why this occurs other than to provide another mass destruction scene is unclear).

Some of this is also lacking in originality. As with the dogfight scenes between jets and alien planes that we get several times, Emmerich has done nothing more than copy the George Lucas standard but simply upped the scale of everything. The confrontation with the alien queen is lifted from Aliens (1986) but upped by a factor of ten – where the line “Get ready for a close encounter, bitch!” seems groan-worthy to anyone who has seen the original.

Filmmakers seems to be reaching an upper limit in terms of the amount of CGI detail that can humanly be taken in by an audience and I am predicting that Independence Day: Resurgence is it. Here every time there is a dogfight or mass destruction sequence, the screen is so busy with ships darting about firing at one another, objects crashing and exploding, and general chaos that it reaches a point of information overload and is impossible to take in everything that is happening without recourse to a pause button. In other words, all the epic size, mass destruction and kinetic chaos has faded into such a blur of happening that it falls into an indifferent tedium.

In Germany, Roland Emmerich made The Noah’s Ark Principle (1984), Making Contact/Joey (1986), Ghost Chase (1987) and Moon 44 (1990). He came to the US to make Universal Soldier (1992), his first co-writing collaboration with Dean Devlin. The two next made was Stargate (1994), Independence Day, the English-language remake of Godzilla (1998) and the non-genre American War of Independence film The Patriot (2000). Emmerich, Devlin and their Centropolis production company have also acted as producers on a number of other films including the flop Crusaders in space comedy The High Crusade (1994), the short-lived alien on Earth tv series The Visitor (1997), the Virtual Reality film The Thirteenth Floor (1999), the giant spider film Eight Legged Freaks (2002) and the post-holocaust film Hell (2011). On his own, Roland Emmerich subsequently made the environmental disaster film The Day After Tomorrow (2004), the prehistoric 10,000 BC (2008), the end of the world film 2012 (2009), the historical non-genre Anonymous (2011) that proposes that Shakespeare’s plays were written by someone else, the action film White House Down (2013), Stonewall (2015) about the birth of the US gay rights movement and the war film Midway (2019.

After parting from Emmerich, Dean Devlin disappeared off the radar apart from producing the odd thing such as Eight Legged Freaks, Cellular (2004), the trio of tv movies The Librarian: Quest for the Spear (2004), The Librarian: Return to King Solomon’s Mines (2006) and The Librarian: The Curse of the Judas Chalice (2008) and subsequent tv series The Librarians (2014-8), the Bermuda Triangle tv mini-series The Triangle (2005) and the tv series Leverage (2008-12) and The Outpost (2018– ). He subsequently went on to direct/write the disaster film Geostorm (2017) and the thriller Bad Samaritan (2018).