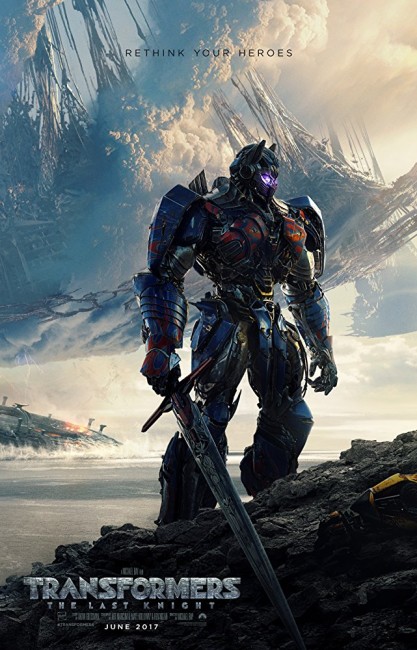 In 484 A.D., Merlin aids King Arthur with the help of twelve Transformers that combine into one giant robot, controlled by a staff they have given to Merlin. In the present-day, the Transformers have been outlawed and the US government set up the military task force TRF to eradicate any that remain. Cade Yeager hides in the walled-off ruins of Chicago where he repairs a handful of remaining Transformers. When a bunch of kids venture in, he saves them from a TRF attack. One of the Transformer knights is killed but first gives Cade an amulet that attaches itself to his body. Cade befriends one of the kids, Izabella, an adept mechanic, who insistently follows him to a junkyard in South Dakota where the remaining Autobots hide. Meanwhile, Optimus Prime lands on Cybertron where Quintessa, the creator of the Transformers, reprograms him as the villainous Nemesis Prime. She wants the staff that was bequeathed to Merlin in order to reconstitute Cybertron. And so she moves Cybertron on a course towards Earth. Cade is taken to England to meet Sir Edmond Burton, the last of the Witwiccans who are bound with protecting the secret of the existence of the Transformers throughout history. Burton introduces Cade to Oxford professor Vivian Wembly, a descendant of Merlin. They set out to find the whereabouts of the staff among her late father’s belongings. Pursued by TRF and Decepticons, they board a submarine in search of the sunken Transformer ship where the staff is hidden, at the same time as Quintessa moves Cybertron into orbit, threatening to destroy the Earth.

Transformers: The Last Knight was the fifth of Michael Bay’s films based on the Transformers toy line and the animated tv series Transformers (1984-7). The film series began with Transformers (2007) and was followed by Transformers: Revenge of the Fallen (2009), Transformers: Dark of the Moon (2011) and Transformers: Age of Extinction (2014). These have become massively successful, having earned over four billion dollars at the box-office around the world between them. Bay announced that this will be his last Transformers film, although one should note that he also said the same two films ago and at the same time as The Last Knight comes out has also signed on as producer of the spinoff Bumblebee (2018).

Michael Bay makes the same film he has with the previous four in the series – although one of the more amusing things this time is that you get the impression that Bay is trying to second-guess his critics (something that is generally referred to as lampshading). The accusation that can be levelled at earlier Transformers films is that they trade in racial caricatures. He counters this here by giving Mark Wahlberg an Africa-American and a Latina kid as sidekicks (even if they get left behind in South Dakota when the bulk of the action kicks in).

The anthropomorphism of the Transformer robots is still ridiculous – we have one that has an outrageous French accent (although in the spirit of Bay lampshading himself, the robot complains he is stuck in that mode), while another for some reason has a natural form as a WWI general who transforms into a Mark V tank (given that the Transformers are supposed to be thousands of years old, it seems odd how they are able to predict Earth military fashions centuries in advance when coming up with their designs). Elsewhere, Jim Carter gets to voice a robot butler – Mark Wahlberg jokingly refers to him as C3P0 at one point and unfortunately that association gets stuck in your mind and you cannot help but keep seeing Cogman that way for the rest of the film.

The Last Knight could be said to be the Michael Bay equivalent of a comedy. Or at least it shows him trying to shake up his usual action/mass destruction formula and playing a number of scenes for comedy. At which you should strongly advise him not to give up his day job. The junkyard scenes are ridiculous with images of squabbling Transformers beating each other into scrap metal in the background; Mark Wahlberg berating one of the Dinobots for having eaten the sheriff’s police cruiser and forcing it to vomit it back up; and he and Isabella Moner treating the miniature robots as petulant pets, with Wahlberg at one point even ordering one of them to bring him a beer.

There’s an embarrassing scene with Laura Haddock’s aunts misinterpreting the terminology in a personals column ad, which has a payoff when she later returns home with Wahlberg and their going through things in her father’s study is taken for vigorous sex. Perhaps the most ridiculous of these scenes is where Anthony Hopkins is showing Wahlberg and Laura Haddock around his mansion and the dramatic score that plays is revealed to be Cogman at the organ, where Hopkins has to order him to shut up, followed by him singing opera.

The rest of the film is Michael Bay as usual. Laura Haddock is introduced as an Oxford professor and, aside from delivering a lecture debunking the Arthurian legends, is the usual objectified women of a Michael Bay film – notedly, she gets to deliver the lecture while wearing a skin-tight pencil skirt that looks as though she has been poured into ir and her academic expertise ends after that one scene. Although in the spirit of lampshading his own peccadilloes, Bay also gives Mark Wahlberg equal time as a sex object and throws in a closeup where Wahlberg lifts his shirt to reveal a ripped set of abs.

Bay tries to create an attraction between Laura Haddock and Mark Wahlberg, which is laughably unconvincing, due to the fact that both actor gives the clear impression they don’t want to be doing it. Even the respectable and acclaimed Antony Hopkins doesn’t get off so well – reduced to referring to one of the transformed cars as a “bitchin’ ride” and at one point yelling at one of the tourists aboard the submarine to “Get your fat ass out of here.”

There are all the usual absurdly over-the-top Michael Bay action/visual effects/mass destruction sequences – from the scenes with TRF shooting up the ruins of Chicago to a scene that for no real reason I can clearly discern seems to require having expensive cars race around the streets of London creating multi-vehicle pile-ups. For equally non-discernible reason, Excalibur is buried at the bottom of the ocean solely so that Bay can stage a series of scenes involving Transformers and submarines.

Bay gets it all together for an epic-sized climax involving Earth and Cybertron colliding with one another (where massive chunks of another planet crash a mere twenty feet away from characters without it even in the slightest impacting their stride), a nerd scientist yelling to the UN how this is going to treat the Earth like popcorn in a microwave, Transformers in combat, US troops parachuting in, lots of gunfire and massive explosions, heroic sacrificial leaps into death-defying circumstances, Mark Wahlberg and Laura Haddock spending an inordinate amount of time sliding down tilted surfaces and then dealing with on/off gravity. In other words, the sort of stuff Bay does for a workout before breakfast each day.

One of the more absurd aspects of the film is the need to mash it up with the Arthurian legends. This may well have been due to the desire to ride on the bandwagon of Guy Ritchie’s King Arthur: Legend of the Sword (2017), which came out one month before The Last Knight (which also had Akiva Goldsman present as producer) and presaged a huge box-office resurgence in Arthurian films only to prove a massive flop upon release. Legend of the Sword was a wannabe Michael Bay film – indeed, you could say the Arthurian prologue here is more what Legend of the Sword wanted to be than Ritchie ever ended up pulling off.

In order to graft the Arthurian legends onto the Transformers, the film has to awkwardly bend either mythos – thus The Knights of the Round Table are rewritten as Transformer robots and Excalibur becomes a talisman that can control them. I did kind of like the idea that a Transformer became the legend of the dragon, although one of the plausibility killers here is Stanley Tucci (whom you might remember also played an evil CEO in the previous Transformers film) as a badly miscast Merlin.

The script also contorts the Transformers film series’ back mythology to make it work – where The Dark of the Moon gave the impression the Transformers were only known from 1969, this has Anthony Hopkins cast as a hereditary guardian and a montage of paintings and photos that show they have acted throughout history (the family legacy is represented by a shot of Shia LaBeouf in a mouth-wide gasp). And naturally, it all gets boilerplated onto a plot that requires Mark Wahlberg to be the Chosen One. Well actually Laura Haddock is the Chosen One but Wahlberg gets some amulet doohickey attached to him throughout that means he gets to wave the sword too at the climax, even if I am not quite sure why the plot required him to do so. The addition of the Pangaea plot and horns buried beneath famous landmarks, the centre of which is Stonehenge, pushes The Last Knight into the loopy arena of Eric Von Daniken and his Ancient Astronauts theory – see Chariots of the Gods (1970).