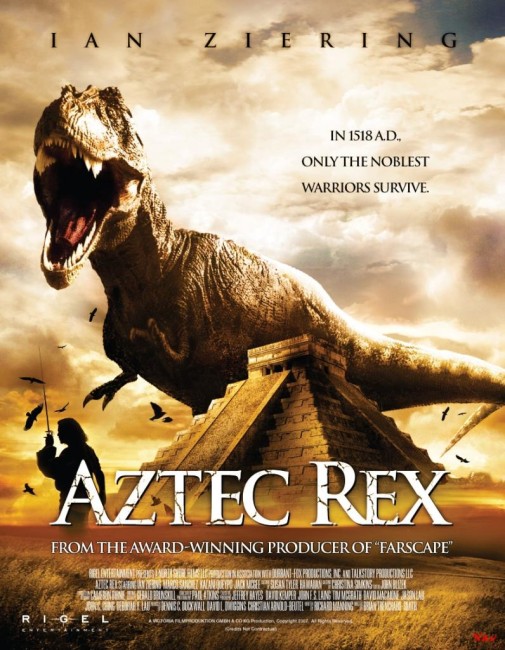 The year 1521 along the central coast of Mexico. Conquistadors under Captain Hernan Cortes explore the territory but are captured by a local Aztec tribe. At the same time, Ayacoatl, daughter of the tribe’s chief Matlal, refuses to marry the warrior Xocozin and flees. She is attacked by a tyrannosaurus rex but is saved by Cortes’s second-in-command Lieutenant Eduardo Rios. Cortes proposes to Matlal that they rid the area of the two tyrannosaurs in return for their freedom. They promptly find this a more difficult task than they anticipated. This is not helped by divisions within Cortes’s crew with men just wanting to take the Aztec gold and flee. Meanwhile, Xocozin sees that Ayacoatl has developed an attachment to Rios and seeks to kill him.

Brian Trenchard-Smith is a director with a long history in genre cinema. Though British born, Trenchard-Smith was raised in Australia and found his footing in various action movies in the 1970s Ozploitation heyday, most famously The Man from Hong Kong (1975). In genre material, Trenchard-Smith directed the sf prison film Turkey Shoot (1983), the quite good future satire Dead-End Drive-In (1986) and the modestly effective children’s film Frog Dreaming/The Quest (1986), before going to the US for films like Night of the Demons 2 (1994), the alien abduction film Official Denial (1994), Leprechaun 3 (1995), Leprechaun 4: Leprechaun in Space (1996), the meteor collision film Doomsday Rock (1997), Atomic Dog (1998) about a mutant dog, the Biblical End of the World film Megiddo (2001), the haunted house film Sightings: Heartland Ghost (2002), the plague film The Paradise Virus (2003) and the disaster movie Arctic Blast (2010).

Tyrannosaurus Azteca/Aztec Rex was made a decade-and-a-half after Jurassic Park (1993) had created a major revival of the Dinosaur Film. This had been followed by assorted copies and weird twists on the basics of the dinosaur film that included the head-scratching likes of Tammy and the T-Rex (1994) and Theodore Rex (1995). Tyrannosaurus Azteca was one of these weird genre hybrids that was made for the Syfy Channel (back when it was still being called the SciFi Channel).

Tyrannosaurus Azteca comes with a not uninteresting premise. It is set in Mexico in 1521 just as it is being conquered by Spanish Conquistador Hernan Cortes. Hernan Cortes (1485-1547) was a real historical figure – he served in various government departments and as a magistrate in Hispaniola and Cuba. He defied the governor of Cuba and from 1519 to 1521 led a rogue expedition that ended up conquering much of what is Mexico today. Cortes’s most famous exploit was his march on the Aztec capital Tenochtitlan with an army of Spaniards and natives and taking the Aztec emperor Moctezuma II hostage. Tenochtitlan was later destroyed and Moctezuma killed, while Cortes was appointed the Governor of Mexico.

The film is far more generous to Cortes than the historical record. He comes across here for the most part as just a regular explorer. There is some historical precedent for this as the film is set in 1521, which would be just after or during Cortes’s conquest of Tenochtitlan and capture of Moctezuma. Cortes certainly befriended and recruited native tribes during his two-year march towards the capital. That said, we are also improbably asked to believe that during the midst of the battle for Tenochtitlan or after that when Cortes had been appointed Governor of Mexico, he sidetracked off and headed into unexplored territory to investigate a heretofore unknown tribe.

Such an interesting idea promptly gets shot in the foot when one sees that all we are watching is a cheap SciFi Channel film. The CGI dinosaur effects vary between the passably cheap and the shoddy, although we do get a few scenes of people being gorily eaten. The Aztec temple built for the show rather laughably seems to be only about twelve feet tall, while the entire Aztec city seems to only consist of tents erected in a field.

Cortes is played by Ian Ziering in a mid-career lull in between Beverly Hills 90210 (1990-2000) and his rediscovery as a bad movie star in Sharknado (2013) and sequels. With blue eyes and an obvious and unconvincing wig, Ziering seems miscast to say the least. (The casting seems even stranger when we get Nepalese-Australian actress Dichan Lachman passed off as an Aztec princess). The part of Cortes is written is as a standard B movie hero rather than murdering and plundering Conquistador. Cortes sort of turns bad guy and joins those wishing to take the Aztec gold in the latter half. He then disappears as a character for the latter third as though the production had run over-budget or out of shooting days and couldn’t afford Ziering any longer and resorted to writing him out.