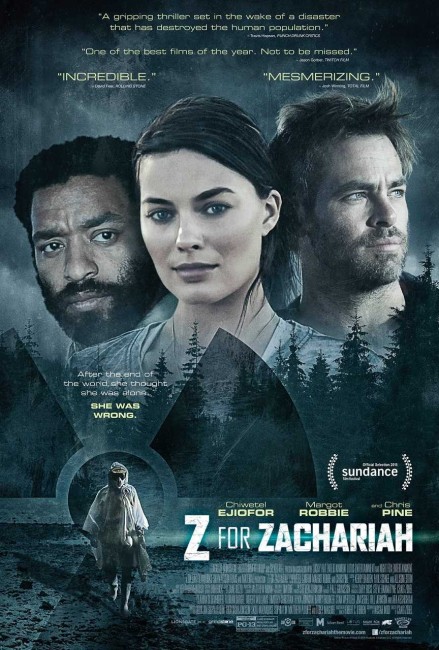 It is after the nuclear war. Ann Burden lives alone in a remote valley that has been sheltered from the radiation. She has been left on her own after her family went to search for survivors a year ago. One day she comes across a man and rushes to warn him as he bathes in the waters of a radiation-infused waterfall coming in from outside the valley. He collapses and she takes him back to the farmhouse and tends him back to health. He introduces himself as John Loomis and tells how he was a scientist who survived in a bunker. He has the knowhow to fix many of the things around the farm and she is eager for him to stay on. He believes that the waterfall could be used to power her generator and provide electricity for the whole valley. However, the only means to build the mill wheel would be by dismantling the church to use its boards. She is reluctant to agree to such because her father built the church with his own hands. She wants John’s love but he is cautious in responding to her affections. The relationship between them is disturbed when another man Caleb turns up in the valley.

Z for Zachariah (1974) was a novel by Robert C. O’Brien, the pen name of journalist Robert Conly, an editor and journalist for National Geographic. He began to write children’s books in the 1960s, the most famous of which was Mrs Frisby and the Rats of N.I.M.H. (1971), later beautifully filmed as the animated The Secret of N.I.M.H. (1982). O’Brien/Conly died of a heart-attack in 1973 and Z for Zachariah was pieced together from his notes by wife and daughter and published in 1974. It won several children’s book awards and the Edgar Award for Best Juvenile Fiction. Prior to this film version, the book had been adapted as Z for Zachariah (1984) for the BBC’s Play for Today show starring Pippa Hinchley as Ann and Anthony Andrews as Loomis, although the setting was moved from rural America to Wales.

This is a new feature film adaptation of the book. Funded by a mix of Icelandic and American companies, it was handed to Craig Zobel, a director who had made several obscure indie films before having a critical hit with Compliance (2012) and the subsequent darkly satiric The Hunt (2020). The film premiered at the Sundance Festival.

You feel like Z for Zachariah started out as wanting to appeal to the 2010s fad for Young Adult films – Twilight, The Hunger Games, Divergent et al – with a plot involving a young woman in her late teens/early twenties taking on the world and crucially in the addition of a love triangle of sorts. That is not quite what Z for Zachariah ends up being as the director seems to have a more adult focus – the emotional triangle is a good deal more complex and ambiguous than you usually get in the simplified storytelling that the YA genre operates on, for instance.

Z for Zachariah is a slow laidback film. It operates fairly much like a Coming of Age story. However, soon in I started to have a problem with the film’s sympathies – the lead girl identifies with a pastoral innocence and believes in a quiet, church-going laidback rural lifestyle. It is hard to determine watching the film if it is making a nostalgic appeal for those who believe in the country life and church-going or is creating this as a contrast to be expanded/shattered. The sad news is that you reach the end of the film not knowing the answer either.

Z for Zachariah starts to become interesting once we meet Chiwetel Eijofor and he begins his grand scheme of transforming the valley. Here the film starts to touch on the survivalist fantasy that is the essence of all good post-holocaust stories. The main problem once the film starts down this path is that it does not seem interested in telling this story. The book only takes place between two characters and contrasts their ideologies To this the film has added a third person (Chris Pine) in order to create a love triangle. In effect, the story now becomes the same sort of interracial love triangle in the ruins that we saw in The World, The Flesh and the Devil (1958) and The Quiet Earth (1985).

This love triangle becomes the film’s primary concern – in fact, you could fairly much write out any science-fiction elements and tell the story in a mundane setting. For that matter, even the clash between Ann’s rural pastoralism and  John’s industrialism, seems muted – it is not what you would choose as being the major theme of the film – whereas the book extends the story a great deal further and has the two in conflict and outright warfare. The greatest frustration of the film though is the way it [PLOT SPOILERS] solves (or fails to solve) the triangle, reaching an irresolute ending that simply leaves everybody annoyed going “huh” as to Chris Pine’s fate.

A film with such a small cast and relatively contained dramatics usually ends up being an actor’s field day. Australian-born Margot Robbie was on the rise in the last couple of years before this in films like The Wolf of Wall Street (2013), Focus (2015) and as Harley Quinn in Suicide Squad (2016), before winning an Academy Award nomination with I, Tonya (2017). By contrast, she goes to the opposite extreme here and her looks are made down to appear as an average girl to do some serious (as opposed to glamour) acting.

Opposite her is Chiwetel Ejiofor who has become an increasingly underrated actor with everything he does since I first noticed him in Dirty Pretty Things (2002). Even Chris Pine starts to do some reasonable acting when he turns up. You certainly cannot fault the film on the acting front; it is just the abandonment of much of the book and the fade-out to a non-ending kills much of the potential it had.