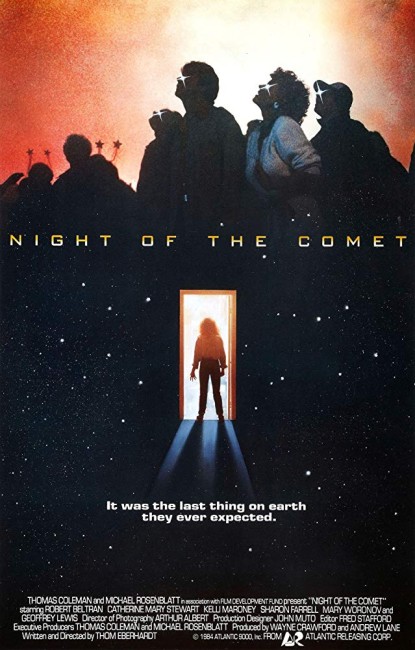 A comet on a 65 million year orbit is returning to Earth – the last time it came coincided with the death of the dinosaurs. People worldwide hold comet parties. Teenager Regina Belmont spends the night in a metal-lined cinema projection booth with her boyfriend. When she emerges, she finds Los Angeles deserted and only small piles of dust where people’s clothes previously were. Others have been turned into zombies. Regina’s younger sister Samantha has also survived, having hidden in a metal-lined shed. The two regard the end of civilisation as the opportunity for unlimited partying. However, they are pursued by a group of scientists who want their unpolluted blood to stop themselves from being zombified.

Director Thom Eberhardt clearly conceived Night of the Comet as an affectionate homage to the B post-holocaust films of the 1950s. (Night of the Comet has evidently been made by a genre fan – who else would stock a film with characters rhapsodising about the joys of having a mint condition print of It Came from Outer Space (1953) – and in 3D too!!!). Night of the Comet emerges as akin to imagining The Day of the Triffids (1962) with a good swagger of Night of the Living Dead (1968) thrown in and all filtered through the hipness of a Valley Girl film.

There is a sense of witty humour to the film – like the image of Catherine Mary Stewart stopping on her motorcycle in an entirely deserted city to wait for the lights to change or how the end of the world becomes a perfect opportunity for the two girls to go shopping. Kelli Maroney is rather amusing playing a vacant-headed, bubblegum-blonde with an attention span of about three seconds, although Catherine Mary Stewart as her older sister plays too straight-faced.

Unfortunately, this is an idea that is too thin to stretch the length of the film. Thom Eberhardt clearly does not have the budget at his disposal to create a complete vision of the holocaust and it is only represented by cheap lighting effects and optical tinting. The cheesy zombies never get to do a whole lot – two dream sequences inserted for shock value only reinforce the lack of purpose or threat the zombies have in the film. It never seems to occur much to Eberhardt to go for broke in George Romero territory and the pit the zombies against the survivors in a siege situation. Similarly, the medical vampirism plot that takes over the second half of the film is poorly developed and pans out in an uninteresting shoot–’em-up.

Night of the Comet was a modest critical hit. Director Thom Eberhardt had previously made the muddled deathdream film Sole Survivor (1983) and went onto the witty Sherlock Holmes spoof Without a Clue (1988), Captain Ron (1992) and the horror film Naked Fear (2007). Eberhardt also wrote the screenplay for Honey, I Blew Up the Kid (1992) and then disappeared into tv land where he has made several other light fantasy tv movies – Twice Upon a Time (1998), Ratz (2000) and I Was a Teenage Faust (2001).