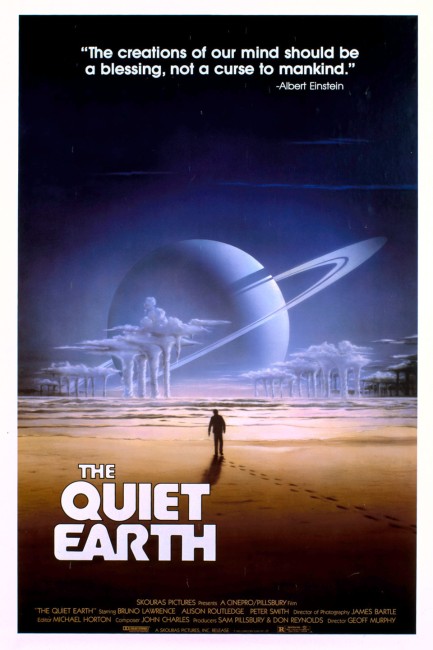 Scientist Zac Hobson wakes up one morning to find himself completely alone. As he searches, it becomes increasingly apparent that he is the only man left alive in the world. Everybody else has just vanished, even in the midst of activity – jugs left boiling, vehicles still running, a plane crashed with all the seatbelts still done up. Investigating, Zac finds that the activation of Operation Flashlight, a project he was working on to set up a worldwide energy grid, has caused a fundamental change in the basic structure of matter. Wandering alone, his sanity travels between euphoria and despair at his isolation. He then meets another survivor – a girl, Joanne – and they become lovers. That is until the appearance of a third survivor, the Maori Api, which creates a triangle of tensions.

Director Geoff Murphy first emerged in New Zealand, after a couple of minor films, with Goodbye Pork Pie (1980), a loose and freewheeling chase movie, which had an anarchic, anti-authoritarian tone that made it a cult film and for many years the most successful film ever made in New Zealand. Murphy went onto further success with Utu (1983), an historical drama that mounted the 1840s Maori Wars as an epic Western of sorts. Geoff Murphy then made The Quiet Earth, which gained him an international reputation and subsequently found him in employ in the American mainstream.

The Quiet Earth is an end of the world film. However, it is one where Geoff Murphy veers away from any association with contemporary voices on the subject such as Mad Max 2 (1981) and its numerous clones, and instead returns to the 1950s mini-genre of last people on earth dramas such as Five (1951), Day the World Ended (1955), Last Woman on Earth (1960) and The Last Man on Earth (1964). In particular, The Quiet Earth reminds of The World, The Flesh and the Devil (1958), which featured an interracial triptych of survivors – a white man and a black man fighting over a white woman – something that caused a sensation at the time with its inter-racial affair – and the tv movie Where Have All the People Gone (1974) in which a mysterious catastrophe causes all but a handful of survivors to vanish, leaving only empty clothes behind.

The Quiet Earth is at its most effective in conveying the barrenness of humanity’s absence. The soundtrack was re-dubbed in the studio to remove all trace of everyday sounds. If possible see the film in a theatre with a stereo system – the sudden ringing of a telephone or the rolling of an unseen can from one side of the speakers to the other makes the desolation seem even more absolute by its interruption. The scenes with Bruno Lawrence cracking up are conveyed in striking, often playful, collages of images – him wandering in a ladies slip, taking whatever material possessions he wants, driving full-size trains as though it were a toy train set and one beautiful image of him wandering in the rain playing the sax.

Murphy does occasionally allow his typically idiosyncratic pretensions to intrude, his own peculiar variations on that roughhewn sense of giggly-embarrassed yobbo anti-authoritarianism we call Kiwi humour, with Bruno Lawrence in a slip ranting at cardboard cut-outs of famous figures and blasting up Christ in a church and yelling “Now I’m God.” [In an interesting trivia note, Murphy and co tried to get Jack Nicholson for the Bruno Lawrence role but turned him down when he demanded $4 million and 25% of the profits].

Far less effective is when the film abandons the lyrical, visual poetry of isolation and introduces two other characters in the second half. Here it merely becomes a trite love triangle – and one that is not dealt with entirely satisfactorily. Certainly, Alison Routledge’s sparkly fairydown performance and Peter Smith as the aggressive Api are more successful in countering this. However, rather than offer any satisfactory or dramatic closure to the triangle, the film jams its brakes on full-stop, leaving everything unfinished. We never understand anything of the games that Alison Routledge appears to be playing with the two men. Much of the problem is that the film was still being written during the shooting. The script has largely abandoned much of Craig Harrison’s 1981 novel, which was written as a J.G. Ballard-esque journey through inner terrain.

Of course, that brings one to the ending. What exactly happens or what it means is entirely baffling. [SPOILER ALERT]. Here the world undergoes another of the reality shifts that have been occurring throughout. This time though after it happens Bruno Lawrence inexplicably finds himself on a beach as a ringed planet rises up in the sky above him. (Well, it is not too much of a surprise as the film’s poster used this very image to promote the film). However, it is baffling in that there is no answer offered to what this place is or exactly what has happened, and certainly this does not offer any answer to any of the questions raised in the film – like where everybody else went to.

Geoff Murphy seems to be wanting to aim for something like 2001: A Space Odyssey (1968) with its enigmatic journey into psychedelic space or The Picnic at Hanging Rock (1975), a seemingly paranormal mystery that deliberately withheld any answer as to what happened, and particularly Solaris (1972), which reached the same kind of puzzlingly transcendental resolution. These aforementioned worked beautifully due to painstaking elaboration of their enigmas, with meanings and explanations carefully left just beyond the grasp of an audience. On the other hand, The Quiet Earth smacks of an ending that leaves a mystifyingly blank titillation, something that has been randomly dreamed up, borne out of a not knowing how finish the film than anything else. It certainly leaves all audiences confused.

Geoff Murphy’s subsequent career in the American mainstream has been entirely one of mediocrity with the likes of the Western Young Guns II (1990), the science-fiction film Freejack (1992), the Steven Seagal vehicle Under Siege 2: Dark Territory (1995) and Fortress 2: Re-Entry (2000). Nowhere in any of these is to be found any of the energy and anarchic humour that fueled Murphy’s three best New Zealand productions, Goodbye Pork Pie, Utu and this. Murphy also co-wrote the haunted car/stalker film Mr Wrong/Dark of the Night (1985) for director Gaylene Preston. In the 2000s, Murphy returned to New Zealand to direct second unit on Peter Jackson’s The Lord of the Rings: The Fellowship of the Ring (2001) and sequels. The only other film he went on to make before his death in 2018 was the silly true-life conspiracy film Spooked (2004).