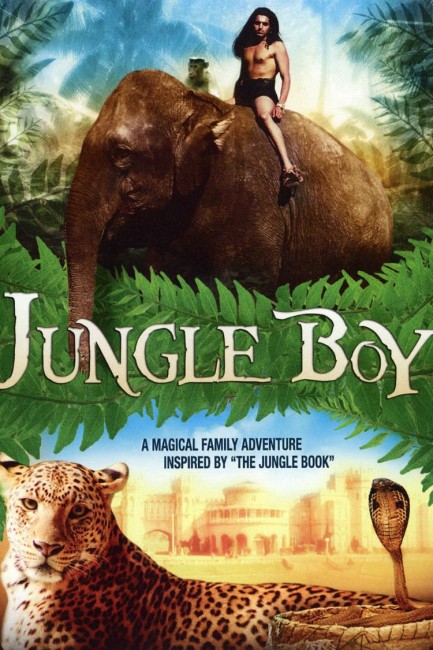 During a festival to celebrate Dava, the Indian spirit of the jungle, a young boy, Suresh, follows a monkey away from his village and into the jungle. He is pursued by a leopard and becomes lost. Dava then appears and grants Suresh the gift of being able to speak animal languages. The animals come and adopt Suresh and he grows up as a young man among them. He is then challenged to fight by Sabre, the same leopard that attacked him as a child. The fight takes him to the nearest village where he uses fire to drive Sabre back. However, fire violates the laws of the jungle and he is banished. Dava appears, granting Suresh the name Krishna and encouraging him to live among humans again. Suresh/Krishna comes upon the house of American archaeologist John Geller and his daughter Anna. They invite him to stay and teach him language and civilized ways. Meanwhile, the rajah Singh has employed the villainous Joshua Hook to find Rudyard Kipling’s lost city of Naga, which contains a statue that is reputed to grant the owner the ability to speak all languages. After meeting Krishna, Hook takes Geller and Anna hostage to force Krishna to lead the way to Naga.

Jungle Boy comes from producer Ashok Amritraj. Ashok Amritraj is a former world championship tennis player from India who emigrated to Hollywood and now manages the Hyde Park Entertainment production company. Throughout the 1990s, Amritraj was known for his partnership with former actor Andrew Stevens where the two produced a number of B-budget erotic thrillers and action films. During this time, Amritraj also returned to India to make this B-budget jungle adventure. Elsewhere, Amritraj has produced a number of A-list films including Battlefield Earth: A Saga of the Year 3000 (2000), Get Carter (2000), Antitrust (2001), Original Sin (2001), Walking Tall (2004), Death Sentence (2007) and Machete (2010).

Jungle Boy is a blatant copy of Rudyard Kipling’s The Jungle Book stories. The script even goes so far as to borrow Kipling’s notion of the Law of the Jungle. The film acknowledges its source by making much mention of “Kipling’s lost city of Naga.” Although, after doing a search of Rudyard Kipling’s works, the only reference to any Naga I could find was a single mention of the Indian province of Naga to be found in Tod’s Amendment from Plain Tales from the Hills (1988), and two talking snakes called Nag and Nagaina in Rikki-Tikki-Tavi in The Jungle Book (1894).

Even more so than the Rudyard Kipling stories, what Jungle Boy resembles is a copy of Stephen Sommers’ then-recent live-action film version The Jungle Book (1994). Jungle boy Asif Mohammed Seth is outfitted very similar to Jason Scott Lee’s Mowgli; while the two films have a near-identical plot wherein the jungle boy is found by a good-natured military captain/archaeologist, falls for his daughter and is forced to take part in the schemes of greedy villains searching for the treasures of a lost city.

Jungle Boy is a distinctly B-budget effort. Though the production has travelled to India to shoot, it is has uprooted the Mowgli story from Kipling’s period setting of British colonial India and Americanised it. This is something that tends to jolt the story out of the innocence of the fantasy it needs in order to work. The plot is predictable and weak. Even the origin story invented for the jungle boy is rather feeble – he merely wanders a few metres away from the township, which is hardly a tragic separation on the order of the abandonment after the death of one’s parents that a comparable character like Tarzan received.

In the title role, Asif Mohammed Seth has a limited range. Up against him as the romantic interest, Lee Moreno seems precocious. All the non-Caucasian supporting parts seem construed as racial caricatures. The action tends to consist of G-rated slapstick fights with people being knocked over the head and sliding down banisters, falls broken by straw, fruit dropped on their head or a caricatured buffoon being spooked out of his chair by a faked elephant yowl.

Allan A. Goldstein is a director who has mostly otherwise made tv movies. His most well-known work was probably Death Wish V: The Faces of Death (1994). He has also made the sf film Memory Run (1995), the Robin Cook tv movie Virus (1996), the comedy 2001: A Space Travesty (2001), the modernised adaptation of the Oscar Wilde novel Dorian/Pact with the Devil (2003) and The Snake King/Snakeman (2005).