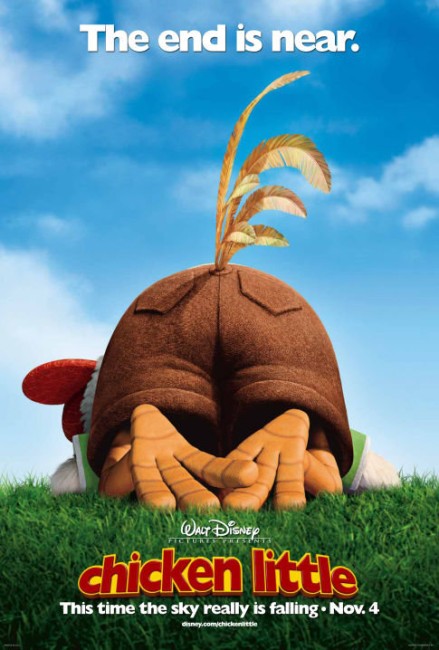 In the town of Oakey Oaks, Chicken Little causes a mass panic when he rings the town bell and insists that the sky is falling. Nobody can see anything and Chicken Little becomes the town laughing stock when the piece of sky that he insists fell on his head is found to only be an acorn. A year later and Chicken Little seeks to regain respect by joining the basketball team but is regarded as too puny and is kept on the bench all season. As the deciding game of the season comes, Chicken Little is put up to bat and succeeds in hitting the home run that wins the entire season for Oakey Oaks. He is declared a hero. However, at the crowning moment of his glory, another piece of the sky falls on his head. This turns out to be a chameleon-like electronic plate that adopts the colouring of its surroundings. Scared to alert the town again, Chicken Little calls his three friends Abby Mallard, Runt of the Litter and Fish Out Of Water. The three of them discover a UFO that is part of an alien invasion. The only choice to stop the invasion would seem to be Chicken Little calling the alert again.

In the 1990s, Disney revitalised the animated film with Beauty and the Beast (1991). Beauty and the Beast succeeded in recapturing the classic Disney animated tradition, in wielding this to cutting-edge computer animation technologies and in making animation big box-office again. Beauty and the Beast was followed by a host of Disney animated films that enjoyed great success – Aladdin (1992), The Lion King (1994), Pocahontas (1995), The Hunchback of Notre Dame (1996), Mulan (1998), Tarzan (1999), as well as the studio’s collaborations with Pixar – Toy Story (1995), Monsters, Inc. (2001), Finding Nemo (2003), The Incredibles (2004) etc. Disney have been responsible for most of the major developments in animation in the ensuing decade-and-a-half – the revival of the classic animated tradition, the restoration of animation as box-office success, its increasing desire to become regarded as art, and the introduction of computer animation, its integration with traditional hand-drawn techniques and then the first wholly CGI animated film.

Why then is it that Disney animation this side of the millennium went into a major decline? There has been no Disney animated film since 2000, with the exception of the modestly successful Lilo & Stitch (2002), that has been either a critical or box-office hit – look at the likes of The Emperor’s New Groove (2000), Atlantis: The Lost Empire (2001), Treasure Planet (2002), Brother Bear (2003) and Home on the Range (2004). Moreover, Home on the Range marked the closing of the last of Disney’s hand-drawn studios and Disney’s move over to computer animation in totality, which many saw as the betrayal of the studio’s tradition.

On almost all counts, Disney has been outstripped by other studios like DreamWorks and up-and-coming competitors like Blue Sky. Without the backbone of Pixar, who spent most of the decade wavering over whether to maintain their collaboration with the studio, Disney animation would be much the sorrier. [Things did change for the better after the appointment of Pixar CEO John Lasseter as Chief Creative Officer at Disney in 2006 where subsequent films under his guise such as Bolt (2008), The Princess and the Frog (2009), Wreck-It Ralph (2012) and Zootopia (2016) make a considerable improvement].

Chicken Little seems a further nail in the Disney animation coffin and is probably one of the most soulless animated films to have been made during the modern Disney era. The film is loosely based on a fairytale of unknown origin, which is variously known as Chicken Little, Chicken Licken or The Sky is Falling. In the fairytale, a chicken believes the sky is falling when an acorn falls on his head and sets out on a journey to tell the king, joined along the way by various other animals that have rhyming names, only to be captured the evil Foxy Loxy who wants to eat them. The fairytale has earlier been adapted by Disney as Chicken Little (1943), an eight-minute short that was designed as a piece of Wartime propaganda where Foxy Loxy became an analogue of Hitler.

Chicken Little feels like a film with an identity crisis. The film and fairytale nominally have the same starting point concerning a chicken that sets out to warn people that the sky is falling. (Although the fairytale that the film seems to be following feels more like The Boy Who Cried Wolf than it ever does Chicken Little). The film has almost no interest in following any of the fairytale and quickly takes a bizarre left-field science-fiction twist. Where the fairytale has Chicken Little and the various animals setting out on a journey but being captured by Foxy Loxy, the film bizarrely turns into an alien invasion tale that would seem to have been closely modelled on Steven Spielberg’s War of the Worlds (2005), which came out five months earlier. (Although, this is probably more coincidence than intent in that Chicken Little was in production well before War of the Worlds appeared).

This is a bizarre enough twist to place on the story but then Chicken Little turns the alien invasion elements on their head with an ending that has been uplifted from Joe Dante’s Explorers (1985) where behind the sinister tripedial machinery the alien invaders are revealed to be just parents looking for a missing kid. Chicken Little ends up feeling like a muddle of discarded ideas that had been tossed around in a writer’s brainstorming session and certainly one that never comes together as a whole. It crucially feels like a film that had too many cooks in the broth and nobody with any overall creative control or idea of what direction the film should have taken.

Chicken Little is also infected with the same manic need to run contemporary pop culture over everything that has dragged down a number of Disney and DreamWorks films – Fish Out of Water does a bizarre parody of King Kong (1933) with a folded paper Empire State Building and biplanes; the opening spoofs various fairytales, including a parody of the opening of The Lion King; Abby Mallard and co karaoke to Spice Girls and there are numerous references to and the playing of popular songs on the soundtrack.

Director Mark Dindal had previously made The Emperor’s New Groove, which had a much more zany feel to it. There is little in Chicken Little that seems in any way standout – the baseball sequence does come with some drama and there is a certain dark tension that goes through the scenes with the alien tripods running loose in the fields. The film gets by with an undeniable liveliness but ultimately feels like a poor attempt to copy a Pixar film. It is one of those films that creates so little impression it can almost be forgotten instantly the moment one leaves the theatre.