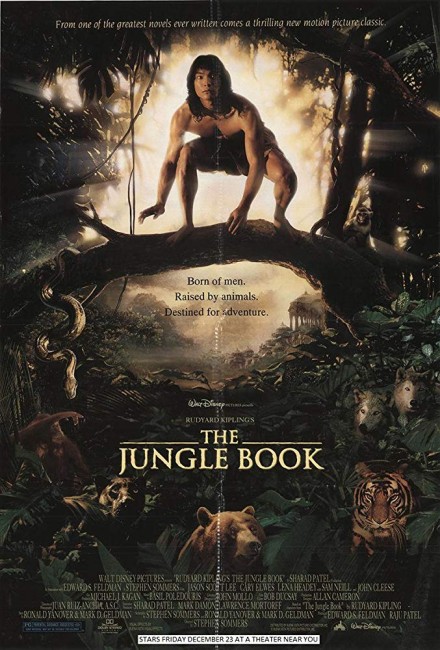 While stationed in India, British Army major Jeffrey Brydon’s five-year old daughter Katherine or Kitty befriends Mowgli, the young son of their native bearer. During an encounter with Shere Khan, the tiger that all the animals know as king of the jungle, Mowgli is caught in an explosion. Believed killed, Mowgli is thrown clear of the explosion. He is found by a pack of wolves and grows up among them to become a strapping young man. Years later, Mowgli encounters the now grown Kitty – although neither is aware of who the other is – and she is captivated by his playfulness and brings him home. Major Brydon is persuaded that Mowgli could be civilised but Kitty’s paramour, the army captain William Boone, arrests and beats him. When Boone realises that Mowgli knows the way to a lost city that contains fabulous treasures, he forces Mowgli to lead he and his men there.

This version is an extraordinarily sumptuous production. The jungles of the Exotic East have never looked more beautiful, Colonial India has never seemed more majestic and the animals (many of which are animatronic figures indistinguishable from the real thing) never more stunningly real. It is a vision of India that is more beautiful than the real one could ever have been – some of the Indian-shot natural vistas across the jungle and night valleys have been dressed with visual effects to make them even more exquisite.

Stephen Sommers directs with a fantastic sense of adventure. The journey to the lost city that takes up the last quarter of the film has an exciting, magnificently sustained tension in the best tradition of the Indiana Jones films. The lost city with its decayed ruins, its death traps, its opulent treasures, giant snakes and hosts of CGI monkeys running about is surely the ultimate Lost City conducted to film.

Stephen Sommers has great aid in the person of Jason Scott Lee. (The Hawaiian-born Lee is an actor of extraordinarily fluid nationality, having been cast as everything from Chinese to Polynesian to, here, an Indian). He is a wonderfully quick and alert actor on screen, his best expression usually being one of complete surprise. He creates a great audience rapport, not to mention being amazingly lithe and well-muscled. There is a great deal of fun to watching his animal impersonations.

Where the film falters is in the predictability of its story. It tells essentially the same story as the Korda version but brings the British Colonial theme to the foreground. However, everything – from the love interest to the lost city to the arrogant military officer – is played predictably. The greatest crime for Rudyard Kipling purists is that the animals are pushed to the background and crucially do not get to speak. Mowgli fails to even get a climactic fight with Shere Khan, Shere Khan just bows down and anti-climactically acknowledges him as the King of the Jungle. The Law of the Jungle has now become a nebulous contemporary metaphor for eco-consciousness. If anything the story, with its emphasis on the choice between Mowgli’s half-man, half-animal nature, has become closer to Tarzan than to the Rudyard Kipling’s stories.

(Winner for Best Cinematography, Nominee for Best Musical Score at this site’s Best of 1994 Awards).