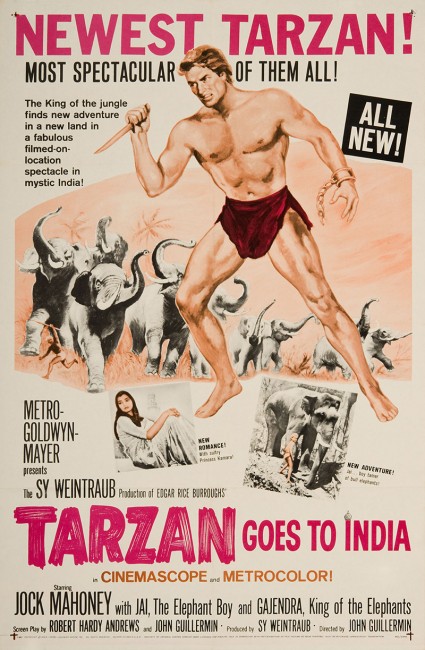 Tarzan travels to India at the request of his friend The Maharaja. He wants Tarzan’s help in moving a herd of wild elephants from the path of a dam construction project, which will mean that the valley where they live will be flooded. The overseer of the dam project is Bryce, a hunter who places little value on human life, whom Tarzan has clashed with before. In the valley, Tarzan befriends Jai, a boy who lives with the elephant Gajendra. The herd is led by a rogue elephant and Tarzan determines that he must kill the rogue and get Gajendra to lead the others out. However, this is thwarted by Bryce who sets out to sabotage their efforts and then kill Tarzan.

The Tarzan film has a long history going back to the silent era. This was reduced to a banal and cosy formula by the series of films spun out by MGM and later RKO Radio Pictures during the 1930s and 40s and principally starring Johnny Weissmuller, which began with Tarzan the Ape Man (1932).

The copyright was taken over by producer Sy Weintraub in 1958. Weintraub made a total of seven Tarzan films, of which Tarzan Goes to India was the third (see below for the others). These are regarded as some of the best Tarzan films by aficionados (including this author). The virtue of the Sy Weintraub Tarzan films was their dismissing the cutsie elements of the MGM/RKO films – writing out Jane and Boy, no comic-relief animal antics, no pidgin English dialogue – and placing a solid emphasis on adventure, including such things as abandoning the studio backlot that stood in for the jungle in almost all of the MGM/RKO films and actually going to shoot in a variety of international locales.

Tarzan Goes to India was Jock Mahoney’s first outing in the role. As with most of the actors cast as Tarzan, Mahoney came from a physical background rather than an acting discipline. He had served as a Marine pilot during World War II and then entered the film industry as a stuntman. He originally auditioned for the role of Tarzan at RKO when Johnny Weissmuller left in 1948 but the part instead went to Lex Barker. Mahoney played the villain up against Gordon Mitchell in the previous Sy Weintraub film Tarzan the Magnificent (1960). Weintraub then made the choice to recast the role and selected Mahoney. Mahoney would only appear in one other Tarzan film Tarzan’s Three Challenges (1963), where the location shooting in Thailand was apparently very rough on his health. Subsequently, Weintraub decided he wanted a younger actor in the role (Mahoney was 44 at the time) and the part was recast with Mike Henry for the next three films.

The Sy Weintraub Tarzan films always made a virtue of going to international locations to shoot – as more than clearly announced by the title here. One feels that the film doesn’t exactly make the best use of India as location – the most picturesque footage appears in side panels during the montage that plays between the opening credits. That said, what the film does give us in abundance is visual spectacle. The scenes with the dam construction are chosen so that director John Guillermin can stage action around the sides of a quarry and look down from the control platform, showing the entire area covered with workers.

Guillermin stages some intensive set-pieces – one of the most seat-edge being where Jock Mahoney has been chained to a tree and is forced to fight off an attacking leopard with his bare hands. The best and most spectacular scenes are those with the elephants. At one point, Guillermin stages an elephant stampede that tramples an entire native village. In another, we get a fight between two elephants – one that has the rogue bull attacking the tree where Jock Mahoney is sheltering and simply pushing the tree over. The climactic scenes involve Mahoney leading a herd of the elephants Hannibal-like through a mountain path as dam workers prepare an ambush.

The film’s big minus is Jock Mahoney. Some of the Sy Weintraub choices for actors to play Tarzan were not the most expressive and Mahoney never does much to carry the film – he came across with far better presence playing a bad guy in Tarzan the Magnificent. The villain played by Leo Gordon offers some threat but is disposed well before the end when the film should have built to a showdown between the two. The film does introduce a cute kid in who is billed as ‘Jai the Elephant Boy’ and holds the screen far more than Jock Mahoney does. (Jai was apparently found on the streets of Bombay but, beyond being billed as Jai the Elephant Boy, his real name is not known).

John Guillermin was a British director who made two of the Sy Weintraub Tarzan films with Tarzan’s Greatest Adventure (1959) and this. Guillermin went onto other big adventure films, war films and spectacles such as Guns at Batasi (1964), The Blue Max (1966), The Bridge at Remagen (1969) and Shaft in Africa (1973). Guillermin is mostly remembered today for the disaster film The Towering Inferno (1974) and the disastrous Dino De Laurentiis remake of King Kong (1976) and its equally terrible sequel King Kong Lives (1986). He also made a return to jungle adventure with Sheena (1984).