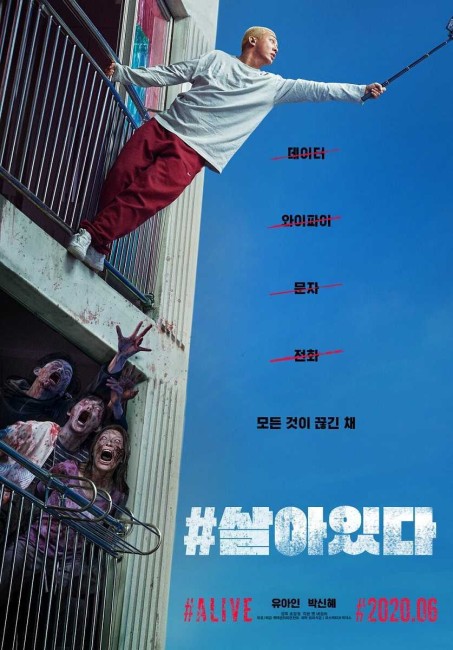 In Seoul, teenager Oh Joon-woo has been left alone in the apartment by his parents and spends his time gaming online. As the connection abruptly goes out, he looks outside to see the city being engulfed in a zombie apocalypse. A man begs shelter in his apartment but Joon-woo drives the man out as he starts to turn. Joon-woo tries to survive on the meagre supplies he has. Despair overcomes him and he decides to end it all and hang himself. Just as he is about to do so, he is interrupted by a laser pointer from the apartment across the street. This is Kim Yoo-bin, a girl his own age. Separated by the street between the buildings, which is filled with zombies, a friendship grows as the two seek ways to aid the other.

Korean contributions to the zombie film have in recent years largely been confined to the international hit of Train to Busan (2016) and its sequel Peninsula (2020). #Alive is another South Korean venture into the zombie genre and came out one month before Peninsula. The same period also saw other offerings such as the period zombie film Rampant (2018) and the comedy Zombie for Sale (2019). The film was a directorial debut for Il Cho.

You may be mistaken initially in thinking that #Alive is not a zombie film. The film came out during the midst of the Corona Virus pandemic of 2020 where it was released directly to Netflix and given a promotion (in English) with the tagline “The rapid spread of an unknown infection has left an entire city in ungovernable chaos but one survivor remains alive in isolation. It is his story.” Crucially, the term ‘zombie’ has been omitted from the description and things spun to give the impression that the film is about a single person surviving in the midst of a pandemic. In actuality, the origins of the zombie outbreak are not given and the infection is spread by nothing any more complicated than people being bitten.

For the first 30 minutes, #Alive takes place as a regular zombie outbreak film with Ah-in Yoo as a typical nerd in his home having to deal with the apocalypse as it occurs outside his window – almost all of the film takes place in the same stretch of street and two facing apartment buildings. This is fairly standard as the genre goes as Ah-in Yoo sees people abruptly attacking others; his scrabble for survival as a man invades the apartment and starts to turn; his trying to deal with a scanty supply of rations.

Where #Alive starts to pick up is after this point when Ah-in Yoo decides to end it all and hang himself only to be interrupted as a laser pointer comes in through the window and spells out messages for him on the wall. It is after this that the film becomes a delightful work about a friendship that grows between Ah-in Yoo and Shin-Hya Park, the girl in the apartment opposite.

It becomes appealing watching the two of them communicate by binoculars, messages spelt out, hand signals and text on cellphones and tablets; or of his use of a drone to send supplies across to her and attach a cable between the buildings. Or of the tense scene as the zombie climbs up the cable that she tried to throw between the buildings and his efforts from the opposite side to stop the zombie from getting to her balcony as she lies unconscious.

The latter third of the film abandons the simple charms of the relationship across the gap and has the two of them meet up. There are some moderately ferocious scenes with them trying to survive attacking zombies in the streets. We then get some scenes where they are granted shelter by another survivor who has sinister intent in mind. The film probably didn’t need these sections – I’d far rather it spent its time on the relationship between the two characters.

Four months later, the same Matt Naylor script was also filmed in a US version of the film Alone (2020), although the Korean version is the far superior of the two.