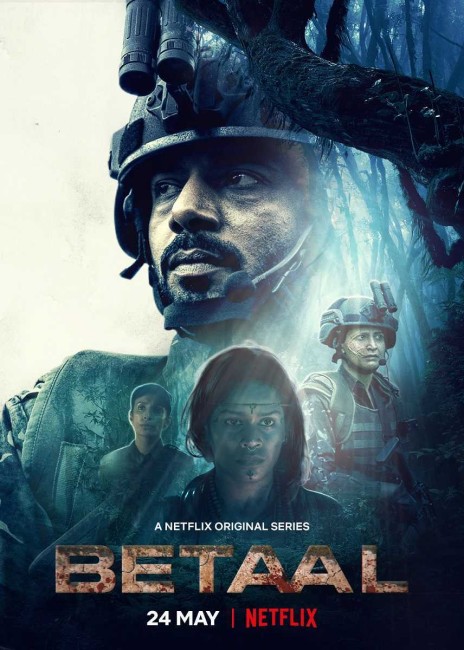 Baaz squad, a unit of soldiers under Commander Tyagi, are assigned to deal with Naxal rebels that are harassing a construction project by the Syuri Development, The project’s head Ajay Mudhalvan wants to open up an old tunnel through Betaal Mountain but villagers blockade the way. Mudhalvan’s teenage daughter Saanvi sees one of her father’s men trigger an explosion. Tyagi uses this as a pretext to order the soldiers to open fire on the unarmed villagers. The soldiers then enter the tunnel but are killed as the zombies of 19th Century British redcoats emerge and begin shooting. The others flee and take refuge at an old armoury. At siege in the building, the soldiers learn the story of British Colonel John Lynedoch who in 1857 sacrificed his own son to harness the power of the Betaal, seeking to make himself emperor of India. The undead soldiers surround the building as Lynedoch demands the surrender of Saanvi in order to complete the ritual.

Bollywood cinema (films produced in India) is something very different to the product that comes out of Hollywood. Most Bollywood films are audience-pleasing works that come filled with song and dance numbers and a requisite romantic element. Even though it is a larger-than-life genre, Bollywood has never much embraced fantastical content. That said, there have been an increasing number of Bollywood horror films that have been made since the 1990s. Examples reviewed on this site include Raat (1992), Raaz (2002), Bhoot (2003), Raman Raghav 2.0 (2016), Tumbbad (2018), Ghost Stories (2020) and a number of others that I will be more than happy to write up as soon as I can find English-subtitled copies. (For more of an overview of the genre see Bollywood Fantastic Cinema).

Betaal was a mini-series that streamed on Netflix in four episodes of around 45 minute length. It is created, co-written and co-directed by Patrick Graham who was born in England and moved to India. There Graham had previously directed/written the dystopian future tv mini-series Ghoul (2018) and co-wrote a further dystopian mini-series with Leila (2019). The surprise is to find that a show with such a strong anti-British streak running through it comes from a British-born creator. Not to mention that the villain of the series is named Colonel John Lyndeoch – Lynedoch is Graham’s middle name and he is a descendent of Baron Lynedoch, a Scotsman who had a high-ranking career with the British Army (although about a century earlier than the fictional Colonel Lynedoch depicted here).

There have been plentiful zombie films before this. (See Zombie Films for an overview of the genre). The surprise is that this is not a genre that seems to have caught on in in India prior to this in the same way that say the possession film has. Like the Bollywood possession film, Betaal sees Bollywood filmmakers turning directly to Western models for inspiration. Betaal essentially borrows the set-up of Night of the Living Dead (1968), the seminal George Romero work that created the zombie film – a group of people at siege in a building as the risen dead outside try to batter their way in, at the same time as the group inside is riven by internal conflicts.

Equally, the image of British soldiers risen from the dead on the march visually at least makes the film suggest something of various American Civil War zombie films like The Supernaturals (1986) and The Killing Box/The Grey Knight (1993), which come with the underlying themes where defeated parts of historic divisions are waiting to rise and devour the present. This proves a surprisingly strong element here – “This is what you call a hard Brexit, motherfucker,” roars Vineet Kumar as he unloads a cannon into the horde of oncoming British zombies at one point.

Patrick Graham and Nikhil Mahajan have no interest in Bollywood models – they dispense with the extruded song and dance number, the romantic interludes that appear in just about every Indian film. Betaal does nothing to reinvent the zombie film but is a solid and well-made entry. Unlike the average zombie film, which runs to around 90 minutes, they extrude the story out to a three-hour length (twice the length of a feature film). Despite a plot that it is not too different to most others in the genre, the mini-series sustains the pace well and rarely flags due to having a reasonable ensemble of characters and focusing on their internal conflicts.

The main issue might be that the redcoat zombies never get to do much. For most of the show, all we see is them constantly marching out of the woods hidden either in mist or quick cuts and it is not until the final episode that they actually break into the armoury. Far more effect is had by those among the party who are turned and sit slavering and hungry, or the spooky character of the commanding officer (Suchitra Pillai) who becomes inhabited by the British colonel.