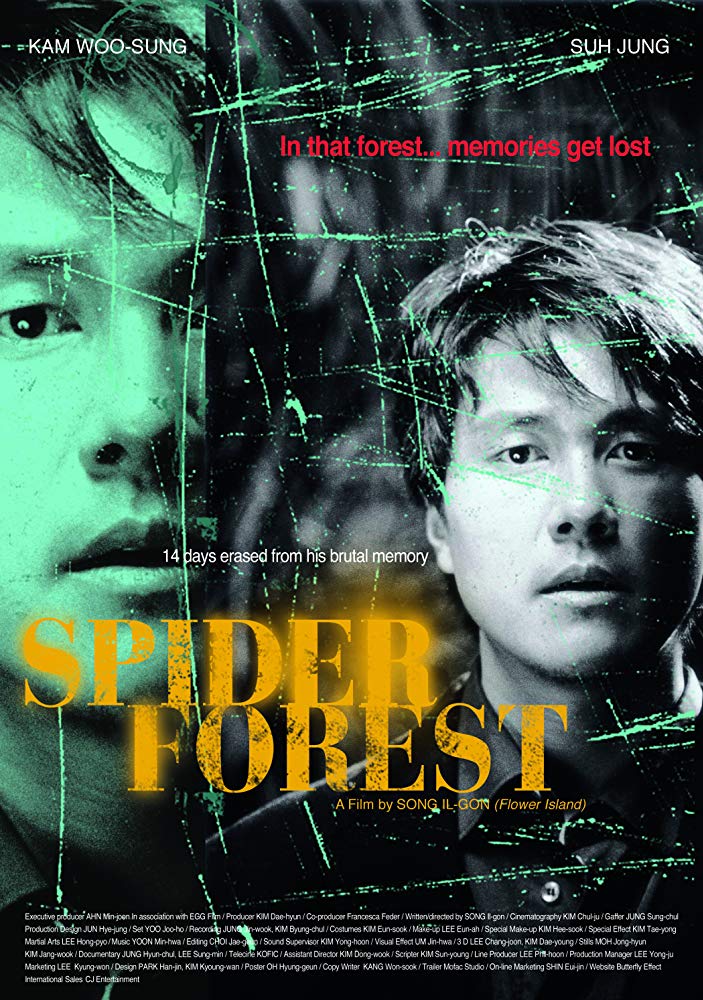 TV producer Kang Min staggers through Spider Forest where he finds his girlfriend Hwang Su-young and another man brutally murdered. Pursued, he is then hit by a vehicle in a road tunnel. Recovering following an operation, he becomes obsessed with returning to Spider Forest and signs out of the hospital still badly injured. His detective friend Choi comes to his apartment to hear his story. Kang Min tells how after the death of his wife, he developed a relationship with a newsreader colleague Hwang Su-young and proposed to her. He went to conduct a story on Spider Forest but a mysterious caller told him to go to a cabin in the forest where he saw Hwang Su-young having sex with his boss. He also befriended Min Su-in who ran a local photographic developing shop and she told him the story of local schoolboy who befriended a mysterious girl who lived in the cabin and of her strange ghostly fate. However, incidents in Kang Min’s memory began to blur as he tried to piece together events from the past. Throughout, mysterious figures kept appearing, leading him to discover who murdered Hwang Su-young and his boss.

This South Korean horror film is one of the modern descendants of M. Night Shyamalan. Spider Forest is sort of if you could imagine The Sixth Sense (1999) remade via the cryptic cinematic games of a Nicolas Roeg circa Don’t Look Now (1973). Or maybe one of the baffling horror films of Japan’s ultra-enigmatic Kiyoshi Kurosawa – Cure (1997), Pulse (2001), Retribution (2006) et al.

Spider Forest is a baffling scratch of the head where everything seems to make sense on some subliminal interlaced level but where you feel that explanations are just beyond one’s fingertips. There is a deeply enigmatic opening – Kam Woo-sung staggers through an eerily lit forest to find dismembered bodies in a cabin, is pursued and staggers into an orange-lit road tunnel where he blurrily sees a mysterious figure emerge out of a door before being hit by a truck. Much of what happens subsequently could well be a deathdream being had as he is operated on following the accident. The film becomes highly confusing – possibly deliberately so – in trying to work out what is present and what is flashback. At times, we even get flashbacks within flashbacks within flashbacks.

Spider Forest is slow moving but does come to absorb one in its slow mystery, especially wondering about the source of the phone calls. There is an eerie story recounted by Suh Jung about the schoolboy visiting the girl who lived in the forest where the two of them watch from hiding as the mother has sex with a man, only for her to be badly beaten by the man and the blood to splatter on the wall behind which they hide. They flee and in a peculiar piece of synchronicity the boy falls and hits his head and then sees the eerie image of the girl floating up and away as he tries to hold onto her hand. This is peculiarly mirrored in the scenes where Kam Woo-sung is seen playing with dolls, making one of them float away while the other tries to hold its hand. These strange mirrorings play throughout the film.

The film’s structure becomes like a surreal mandala where we see one image from one aspect being reflected elsewhere. It is all rather intriguingly baffling. Suh Jung as the girl in the camera shop may not exist or else may be the girl who floated away in the story. Kam Woo-sung may have been the boy in the ghost story, but then appears to have been the person who lived in the cottage in the forest rather than the girl.

[PLOT SPOILERS] He then later appears to be the one who travelled back in time to watch himself carry out the murders and be the stranger who pursued his self at the start. He is told to go to the door in the forest and go through to get all the answers and find why his memory is so confused. However, we never do get any answers. All that happens is that he goes through and becomes the stranger who emerged from the door in the tunnel at the start. We then cut to the surgery and are left with the impression that all the confusions are some kind of deathdream. The film ends without even letting us known whether Kam Woo-sung is dead or alive.

Director Song Il-gon also went onto make the non-genre Feathers in the Wind (2008) and Only You (2011). He returned to genre material with Magicians (2005), also a ghost story, which had the novelty of being shot in a single take.