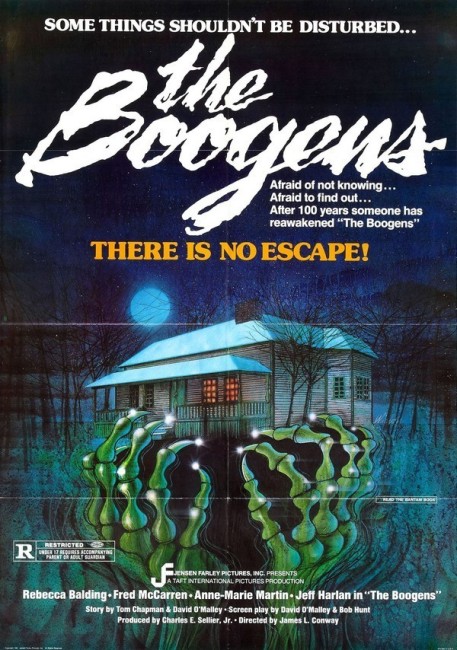 Roger Lowrie and Mark Kinner are engineering graduates who have taken a job with a mining company. They have been sent to Silver City, Colorado to assist with the reopening of a mine that has been closed since an accident in 1912. Roger’s girlfriend Jessica Ford travels out to stay a few days with them, joined by her journalist friend Trish Michaels who takes a liking to Mark. However, the reopening of the mine has caused unseen things to start lurking in the shafts and beneath the house. These creatures now emerge to attack people.

The Boogens could be considered one of the original troglodyte films – that is to say a mini-genre of films about people venturing underground and running afoul of creatures that live there. The original film in this genre was The Mole People (1956). The Boogens popularised the theme for the modern horror era and out of this came other films such as Secrets of the Phantom Caverns/What Waits Below (1984), The Cave (2005), The Cavern/Within (2005), the excellent The Descent (2005) and Caved In (2006).

Though reasonably well produced, The Boogens is on the sedate side as 1980s horror films go. The four characters are likeable enough but the build-up through their banter and relationship happenings and connections is slow-going. It feels like a film that has everything arranged but just sits with the clutch in neutral for most of the running time suggesting things lurking in the mines or beneath the floorboards and in the basement of the house where the four central characters are staying (even though we never actually get to see anything).

It is 53 minutes into the film before we get to see Jeff Harlan being dragged under a car by a single tentacle. It is finally at the 70 minutes mark – the point when most films are entering into the home stretch – before the show erupts into full-blown horror as we see Anne-Marie Martin snatched by a tentacle that tries to bodily drag her down through a grille in the floor and then breaks a door down after her as she gets away. When the creatures finally do emerge, the effects are variable and the boogens are a fairly ho-hum threat that never do much.

The film has shot in a real mine, which provides an authenticity – although clearly the production was not able to spend much time shooting there. By contrast, the film’s main set, a pool inside a cave in the mine, looks artificial and stagebound. One of the more interesting facts about the film is how the township where it takes place and we briefly see in the background is Park City, Utah – none other than the annual home for the Sundance Film Festival. In 1981, Sundance had been running for three years, although was not the big event it is today so it is amusing to see the town before it gained a major place on the film festival calendar.

Most of the cast are unknowns. Rebecca Balding was an emerging actress around this period, appeared as a regular in tv’s Soap (1977-81) and starring in the slasher film The Silent Scream (1979). Subsequently, she married this film’s director James L. Conway and mostly dropped out of acting. Anne-Marie Martin, previously known as Eddie Benton and appearing under such name in several films including The Shape of Things to Come (1979) and Prom Night (1980), subsequently gained famed as Dori Doreau, the female lead on tv’s cult comedy Sledge Hammer (1986-8) then quit acting to marry novelist Michael Crichton of Jurassic Park (1993) fame. It must be said the most spirited performance of the show actually comes from the dog.

James L. Conway began directing with Schick Sunn Classics, a company that specialised in sensationalistic documentaries. For them, Conway directed the documentaries In Search of Noah’s Ark (1976), The Lincoln Conspiracy (1977) and Beyond and Back (1978), as well as producing several others. He moved into fiction with a tv movie adaptation of Edgar Allan Poe’s The Fall of the House of Usher (1979) and the theatrically released UFO film Hangar 18 (1980), both for Shick Sunn Classics. Taft International was a company specialising in medium-budget productions for theatrical release that flourished briefly during the 1980s. For them, Conway also made the alien visitors film Earthbound (1980). The Boogens was Conway’s last theatrical film and since then he has worked entirely as a television director for hire.