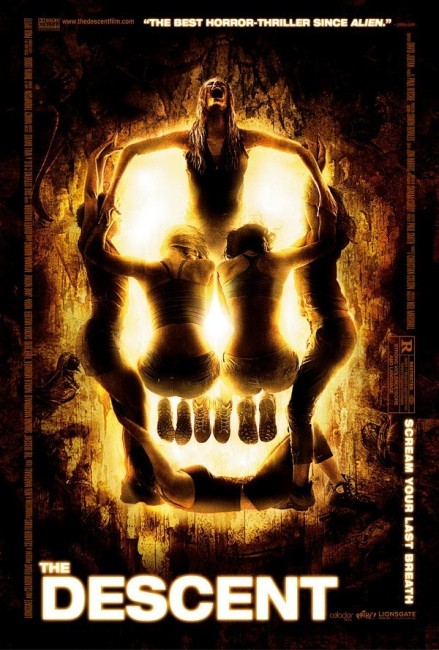 Sarah is recovering after the shock death of her husband in a vehicular accident a year earlier. She joins five other women friends as they travel into Chatooga National Park in the Appalachians to go potholing for a weekend. The group is led by the experienced Juno. Once they are underground, Juno admits that she has taken them into an unmapped area wanting them to be the first to discover it, and that she deliberately left no notification of their whereabouts. As they try to find their way out, they realise that there are creatures down there. The creatures have evolved blind due to living in the dark but have ferocious hunting instincts and live on the flesh of animals, including humans. The journey now becomes a nightmare fight for survival as they are surrounded by the creatures.

In 2005, English director Neil Marshall seemed a promising new talent on the verge of arriving in a big way. Marshall began working in the industry as an editor and then co-wrote Killing Time (1998), a black comedy about assassination, before gaining his opportunity at the director’s chair with Dog Soldiers (2002). Dog Soldiers was a ferociously entertaining micro-budgeted film about a group of territorial soldiers facing off against werewolves and proved to be a sleeper hit in international release. The Descent was Marshall’s follow-up, an altogether better budgeted film that shows Marshall making a quantum advance in his command of the medium and pegging him as one of the most promising British genre directors of the 00s and beyond.

On one level, The Descent could have been a generic horror film. The premise of people encountering creatures that live underground in the dark is, in scripting terms, only a variant on and not that much more conceptually sophisticated than B-budget films like The Mole People (1956), The Boogens (1981) and Secrets of the Phantom Caverns/What Waits Below (1984). Indeed, there were a spate of underground monsters films – Creep (2004), The Cave (2005), The Cavern/Within (2005) and Caved In (2006) – that came out around the same time as The Descent. In terms of plotting, the characters are given no more depth than in a generic slasher movie, while some of their motivation – like throwing away the map and not telling anybody where they are going – would produce groans of disbelief in any other film that had not been produced with the consummate skill that The Descent is.

Of course, all the difference comes in the atmosphere that Neil Marshall engenders. As in Dog Soldiers, Marshall seems fascinated with depicting the environment that his characters are operating in – be it spelunking or the British Armed Services – with a high degree of realism. (All of Neil Marshall’s films are brutal, bare hands tales of survival in harsh environments). Most of all, The Descent is maintained at an extraordinary degree of tension, which Marshall sustains far more intensely than any other horror film is recent memory.

Marshall takes his time building up to the unveiling of the creatures – it is some 40 minutes into the film before we first see them. The early build-up is maintained with an intense degree of claustrophobia – the nerve-wracking scenes crawling through a narrow hole that is barely wider than the actresses waists, which then starts collapsing in around them, or the climb across a cave roof on pitons. The first sudden appearance of one of the creatures, seen standing right behind one of the actresses, is so unexpected it makes the entire audience jump out of their chairs and scream. (Reportedly, not even the actresses themselves had any idea what the crawlers looked like up until they saw them on set).

There are other grippingly intense scenes throughout with the crawlers lurking and attacking out of the most unlikely places; of Shauna Macdonald’s struggle with a woman crawler in what looks like a pit of offal lit in a hellish flame light; and the tense crossing of a ravine ceiling by pitons as crawlers suddenly attack. The makeup on the creatures is exceptionally convincing.

As in Dog Soldiers and his subsequent films, Neil Marshall seems to prefer working with a tight ensemble of unknown actors and pitting them as a group against an external menace. Here he has deliberately chosen an all-women cast. All play convincingly and the characterisations are welcome for the lack of any of the gratuity – ie. undressed scenes – or sexist clichés – men present to save the day, members of the group collapsing into a screaming mess – that there might be in a lesser effort. While the others actresses tend towards a relative anonymity, both the characters of Shauna Macdonald’s Sarah and Natalie Mendoza’s Juno are created as tough kickass women where Neil Marshall takes delight in posing them in backlight bared for action.

Natalie Mendoza’s Juno also comes with a fascinating ambiguity. We initially cheer her on as she gets into a real knockdown, hand-to-hand fight with one of the crawlers and despatches it with a pickaxe and then turns around to attack another creature, only to discover that she has impaled her pick in another member of the party. The ambiguity about her trustworthiness contrasted with the rest of the party’s reliance on her skill becomes a major tension throughout the last half of the film.

One minor complaint about The Descent might be the backstory concerning Shauna Macdonald’s recovering from the death of her husband in a car accident, which seems to be being set up for something that never emerges. This leads to a confusing ending where we are not sure that the latter half (if not all) of the film may have been some hallucination caused by the dark and/or Shauna Macdonald’s grief. (The US version of the film has a different ending that eliminates this and Shauna Macdonald makes it out, only to be spooked by the appearance of Natalie Mendoza’s ghost in the back of her car).

The film is a peculiarly international mix. The actresses all come from different parts of the world – Natalie Mendoza is Filipino/Hong Kong mix, Saskia Mulder is Dutch, Nora-Jane Noone Irish and Shauna Macdonald Scottish. The location is said to be the Chattooga River in the Appalachians, which immediately suggests another harrowing tale of backwoods survival, Deliverance (1972). Despite the professed Chattooga location, The Descent was filmed in Scotland and the caves constructed at Pinewood Studios in England.

The Descent: Part 2 (2009) was a sequel featuring return performances from Shauna Macdonald and Natalie Mendoza.