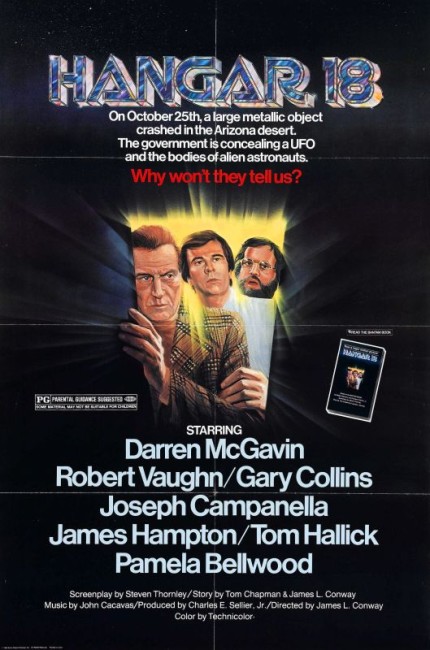 A space shuttle mission is about to launch its satellite payload when a UFO appears. The crew are unable to abort the launch of the satellite and it collides with the UFO. The resulting explosion kills a crewman who has gone EVA. The damaged UFO crashes in Arizona where scientists immediately take it to the lunar receiving facility at Hangar 18 for study. The White House Chief of Staff Gordon Cain orders a veil of absolute secrecy be kept so as not to damage The President’s credibility during upcoming elections. The two remaining shuttle crew return to find NASA refusing to acknowledge the UFO’s existence and blaming the death on commander Steve Bancroft’s negligence. They set out to find the truth behind the cover-up. However, when they start getting close to the truth, Cain orders them eliminated. Meanwhile, the scientists examining the UFO discover that the aliens are genetically linked to humanity and find records showing how they bred with early humans on a previous visit.

Hangar 18 comes from Sunn Classics, the company responsible for a series of really, really bad adaptations of various American literary classics – including The Time Machine (1978), The Legend of Sleepy Hollow (1980) and the worst ever Edgar Allan Poe adaptation The Fall of the House of Usher (1979). Sunn Classics were mostly known for a series of sensationalist cinematically released documentaries on various tabloid subjects – Mysterious Monsters (1976) concerning Bigfoot, In Search of Noah’s Ark (1977), Beyond and Back (1978) about the afterlife, The Bermuda Triangle (1979) and In Search of Historic Jesus (1980).

It is not hard to see Hangar 18 as a fictional treatment of one of Sunn Classics tabloid documentaries – it is the National Enquirer version of Close Encounters of the Third Kind (1977), perhaps also with a small dash of Capricorn One (1978) thrown in. However, it is a Close Encounters that has been stripped of Steven Spielberg’s magic show of lights and reduced to car chases and the cheap dramatics of tv movie melodrama. The scenes of the scientists uncovering the mysteries of the sinister, gleaming black UFO are the film’s best. However, just when developments start to become interesting, they are abruptly disposed of in a ludicrously downbeat ending, one that would seem to confirm all the paranoid military cover-up fantasies that UFO cultists delight in.

The film certainly takes seriously its Erich Von Daniken – the pseudo-science author of Chariots of the Gods (1968) who made the claim that The Pyramids and other ancient monuments were evidence of aliens having once visited the Earth – see the documentary Chariots of the Gods (1970) for more detail. The film here goes through all the nonsense about aliens breeding with early humans who worshipped them as gods and alien language being identical to the symbols at Nazca and Egyptian hieroglyphics, something that surely proves that the realm of B-budget science-fiction is where Von Daniken should be peddling his theories rather than posing them as anthropological-historical fact.

James L. Conway directed and produced many of the abovementioned Sunn Classics films. He also directed their other UFO film Earthbound (1980), as well as the aforementioned The Fall of the House of Usher and one horror film The Boogens (1981). These days Conway works in tv and has been a regular director on all the modern tv incarnations of Star Trek, among other shows.