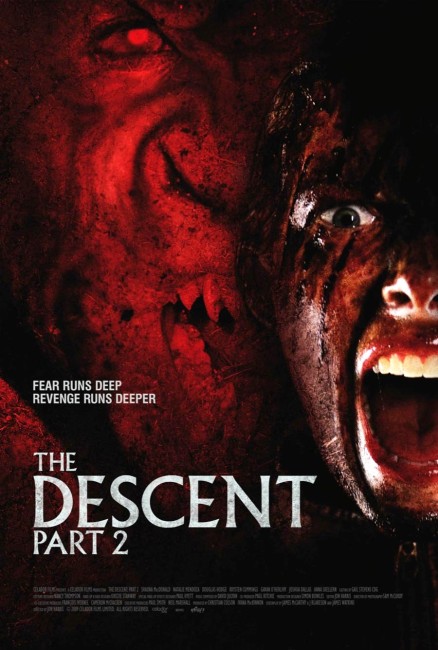 Search and rescue workers are looking for the party of girls who went missing in the Appalachian caves. Sarah Carter is then found near an abandoned mineshaft. Sheriff Vaines tries to question her about what happened to the others but Sarah’s memory is a blank. Vaines, his deputy and various search and rescue workers mount an expedition to head down the mineshaft to search for the rest of the party. Vaines is insistent that Sarah be brought too in the hopes that it will jog her memory. As soon as they get into the network of caves, the party comes under attack by the creatures that hide in the dark. As what happened comes back to Sarah and she is pressed into brutal survival mode, she encounters Juno Kaplan still alive in the dark and angry at being abandoned there by Sarah.

The Descent (2005) became a considerable word of mouth horror hit. It was breakout for its director Neil Marshall. The Descent: Part 2 is the inevitable sequel. To the film’s credit, Neil Marshall has signed on as an executive producer and there are return performance from the original’s two leading ladies Shauna MacDonald and Natalie Mendoza, which gives the impression it is more substantial than a quick pitch for more money.

The Descent: Part 2 offers up fairly much exactly the same as we had in the first film. Thus we get a very limited variation on the same jumps and suspense scenes – creatures unexpectedly popping up in the dark, nerve-wracking journeys down narrow defiles and so on. We even get to revisit familiar scenes from the original – the offal pit, the ravine where people must cross by climbing along the cave ceiling. Jon Harris delivers everything with a competent hand – it is just that all of the material is exceedingly familiar, while the sequel lacks the surprise element about what is lurking in the dark. That said, The Descent: Part 2 certainly works with far better tension than the spate of other films about cave-dwelling creatures that came out around the same time as The Descent – The Cave (2005), The Cavern/Within (2005) and Caved In (2006).

There is the odd scene that works with some originality – where Anna Skellern is left trapped inside a rock fall and waits for the others to return only to find the creatures to start digging their way in after her and then the rock starting to collapse trapping her even further as she tries to climb up; or where Krysten Cummings follows Shauna MacDonald and panics as she finds this requires diving underwater and surfacing to breathe in tiny pockets of trapped air.

Jon Harris places much more emphasis on gore effects than Neil Marshall did – a rat burrowing out from the mouth of a corpse; power drills jammed into the heads of creatures; a scene where Natalie Mendoza must hack off Gavin O’Herlihy’s hands; the climb across the corpse hanging from the pitons on the cave ceiling just as it starts gushing blood. None of this particularly disguises the fact that The Descent: Part 2 is an unnecessary film – one that adds nothing to the original, only ends up repeating it on almost every point.