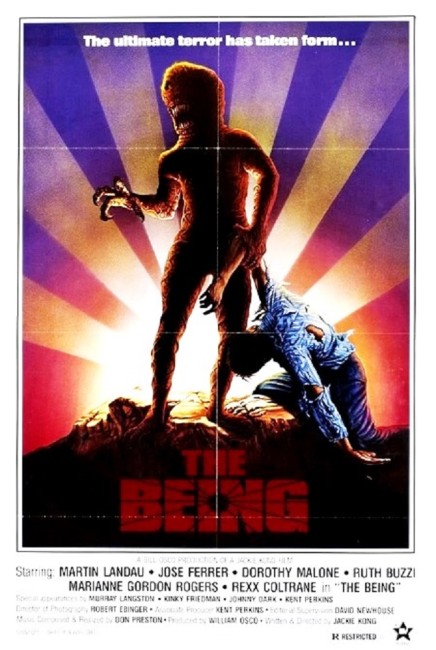 In Pottsville, Idaho, concerns are raised over the new nuclear waste dumping facility that has been built but scientist Dr Garson Jones assures the public that there is no cause for concern. Local police detective Mortimer Lutz investigates a series of missing persons. The missing then turn up dead with Lutz finding green slime at each of the crime scenes. He, Garson and the waitress Laurie join forces as they realise that a mutant monster has been created by the radioactive waste.

Jackie Kong was a woman director back when they were a noticeable minority in the industry. I have great memories of Kong’s hilarious splatter comedy Blood Diner (1987) and wished she had made more films. The Being was her one other genre film and outside of that she has only directed two non-genre comedies with Night Patrol (1984) and The Under Achievers (1987).

Kong was married to William Osco, better known as a producer of adult material under assorted pseudonyms, including Flesh Gordon (1974) and Alice in Wonderland: An X-Rated Musical Fantasy (1976). Osco also plays the detective hero of the film who is listed on opening credit as Rexx Coltrane and on the end credits as Johnny Commander. Despite having no prior experience before this, Jackie was handed the director’s seat of The Being.

The Being was a low-budget independent film of the 1980s. It premiered in 1981 but was not seen by audiences until 1983. This was not long after Alien (1979) had been a huge success and there was a boom in creature effects films. During this period, production companies like New World Pictures and Empire Productions were making an enthusiastic output of low-budget horror films set around cheesy effects.

I came to The Being after watching Jackie Kong’s hilarious Blood Diner and expecting more of the same – an outrageously over-the-top gore comedy. The disappointment is that The Being is simply a regular Monster Movie of the era and nothing more than that. Moreover, it is one where Kong treats the material seriously rather than plants tongue in cheek. There is nothing particularly distinguished about any of the happenings. The one novelty is the eventual appearance of the mutant monster, which has been intended as a cheap copy of H.R. Giger’s Alien and looks rather ridiculous with its single jerkily immobile cyclopean eye.

The major headline name that the film has on board is Martin Landau. Landau was caught in a career lull between tv’s Mission: Impossible (1966-73) and Space: 1999 (1975-7) and his rediscovery in the 1990s as an elder actor following his Academy Award-winning turn as Bela Lugosi in Ed Wood (1994). During this time, he was making ends meet in a host of B movies – see also the likes of Without Warning (1980), The Return (1981) and Cyclone (1987). Here he gives a serviceable performance as a scientist spreading fake information about the safety of the nuclear waste facility.