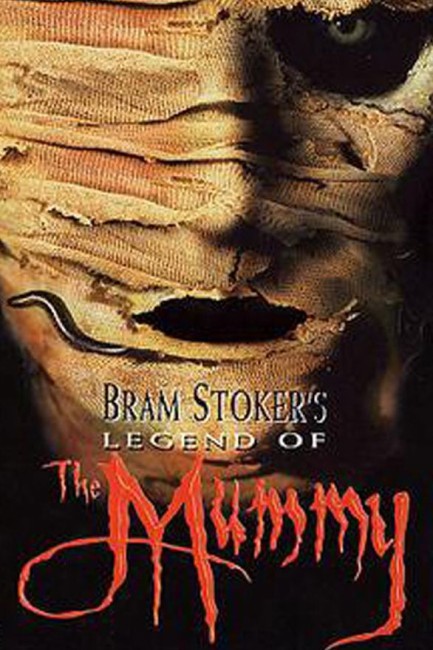 aka Legend of the Mummy

Robert Wyatt is called to the house of his former girlfriend Margaret Trelawny. Her father, an Egyptologist, has been mysteriously attacked and left in a coma. However, her father was expecting this and has left a list of detailed instructions that he be guarded at all times. As other members of the household begin to turn up dead, Wyatt realises the killings relate to the mummy of the Egyptian Queen Kara that Trelawny disturbed from its tomb and brought back to the house. He realises that the mummy has arisen to claim victims so that Kara can reincarnate.

The Jewel of the Seven Stars (1917) was one of Bram Stoker’s less known horror novels. Despite its’ being regarded as stodgy by readers (and moreover a work that was left uncompleted by Stoker upon his death in 1912), it has proved surprisingly popular as a film adaptation. Legend of the Mummy was the third adaptation and had been preceded by Hammer’s Blood from the Mummy’s Tomb (1971) and the A-budget The Awakening (1980).

Of course, what really inspired Legend of the Mummy was the success of Francis Ford Coppola’s Bram Stoker’s Dracula (1992). Following Coppola’s Dracula, several filmmakers turned to other Stoker works, all likewise headlining Stoker’s name above the credits, with the likes of Bram Stoker’s Burial of the Rats (1995) and Bram Stoker’s Shadowbuilder (1997).

Legend of the Mummy was directed by Jeffrey Obrow, who had previously co-directed The Power (1980), The Dorm That Dripped Blood/Pranks (1982) and The Kindred (1986) along with Stephen Carpenter, before branching out solo with the Dean R. Koontz adaptation Servants of Twilight (1991) and this.

Legend of the Mummy presaged the modern revisionist mummy film that began the next year with Talos the Mummy/Tale of the Mummy (1998), Michael Almereyda’s amazing The Eternal/Trance (1998) and then the big budget, effects-driven The Mummy (1999). What is immediately apparent is the difference between Legend of the Mummy and these others – the others create their mummies and conduct assorted happenings with the full arsenal of tricks from various special effects houses, while Legend of the Mummy is squarely an old-fashioned B-budget mummy movie. If the same plot here had been conducted with the resources available to Talos or The Mummy, this might have been an interesting effort.

Alas, the film is utterly dull. It is drearily photographed in a way that wrings all possible atmosphere out of the film and moreover makes it look cheap and amateurish. Jeffrey Obrow seems unable to invest rudimentary suspense in the show – a scene with bugs crawling out of a wall fails to in any way look like anything other than a medium angle shot of some ants milling about. Some of the attack scenes – one with a Jamaican investigator who staggers around his room as a diary suddenly explodes into flame on him, and especially a scene where Richard Karns of Home Improvement (1991-9) fame is fried in a telephone box – are just plain silly.

The initial scenes with the heroine’s father comatose under puzzling circumstances with a mysterious set of instructions left for how to protect him, and a servant girl hinting at unearthly happenings in the stables, suggests a wonderfully Lovecraftian set-up, but the rest of the film is dull and utterly unatmospheric. Even if one had not seen any of the other adaptations of Jewel of the Seven Stars, the twist ending is unsubtly telegraphed waaaaay in advance.

Ancient Evil: Scream of the Mummy (2000) was billed as a sequel, Bram Stoker’s Legend of the Mummy 2 in England, although is unrelated to this in all but name.