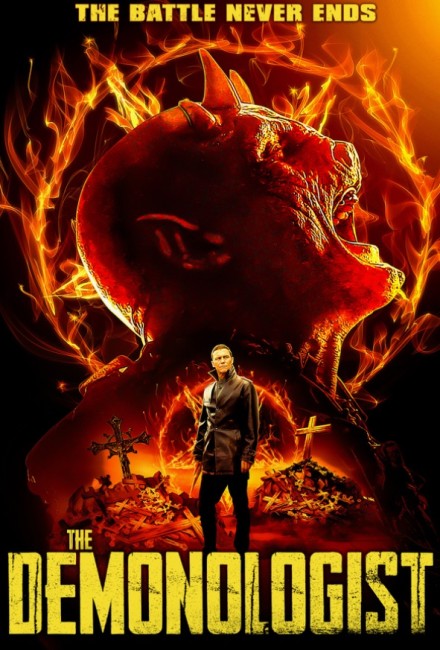 New Orleans police detective Damien Seryth and his partner Frank Garrison investigate a series of ritual killings around the city. As Damien digs into the case, he discovers these are being conducted by a coven of devil worshippers. More disturbingly, he discovers that elements of his own past have been arranged and tie into the occult mystery.

The Demonologist was the third film from J.M. Stelly who had previously made Within Madness (2015) and Abacus (2017), neither of which seems to have been widely seen. This was Stelly’s first film with a recognisable actor – Brian Krause.

Stelly sets up what could be an interesting plot – detectives investigating a series of ritual murders find themselves wound up in the occult and devil worship. The film comes to an interesting ending that definitely seems to be creating a set up for sequels. Unfortunately, The Demonologist is not that interesting a film.

J.M. Stelly is shooting on a corner-cutting budget and the photography/colour toning is sometimes far too murky. The film has a very schematic and not terribly interestingly sketched out plot that plods prosaically from point to point. There is an investigation but no sense of a dark pull drawing people in and for the most part no twists and turns. We do get one major twist near the end when Brian Krause discovers that his past is tied to the devil worshippers and that much of his life has been arranged as part of a scheme but that comes far too late.

What we needed were these twists and carpet pulls from under us earlier in the game – Angel Heart (1987) did this kind of thing to perfection. Moreover, the Satanists are present but never seem to do that much other than feature in a series of cutaways where they conduct a series of rituals and schemings – they are not an ever-present threat surrounding the protagonist like they were in the much superior Spellbinder (1988) and rarely seem to engage with Brian Krause’s hero.

The end development of Brian Krause’s backstory is certainly an interesting twist. It feels more as though J.M. Stelly was setting things up for things up for a series of films. If this were a tv series, this would be the introductory pilot episode. Here we see that Brian Krause has now been recast as an occult detective along the lines of characters like John Constantine or Dylan Dog: Dead of Night (2010) – for which see Occult Investigators.