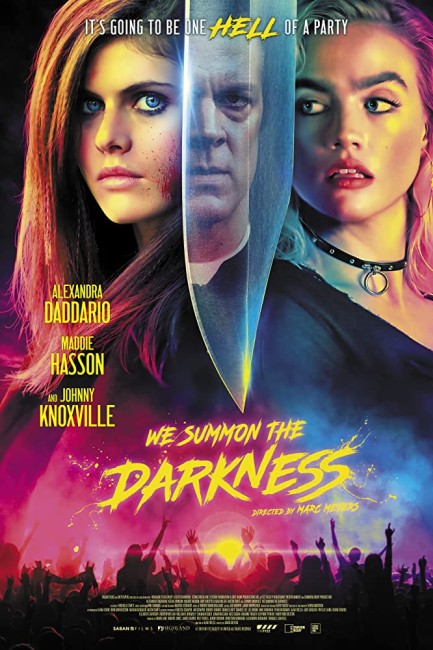 Indiana, 1988. Three girlfriends Alexis, Val and Beverly head to a heavy metal concert. Along the road, they are passed by a van where somebody inside throws a milkshake out onto the windscreen of their car. At the concert, they see the same van and respond by throwing firecrackers inside. They then befriend the three guys from the van, Mark, Kovacs and Ivan. After the concert, the girls invite the guys back to party at Alexis’s parents place. However, there have also been a series of Satanic ritual killings across the area and sinister things are in store.

We Summon the Darkness was the fifth film for director Marc Meyers. Meyers had previously made non-genre dramas such as Approaching Union Square (2006), Harvest (2010), How He Fell in Love (2015) and Human Capital (2019). He had impressed me with My Friend Dahmer (2017), a depiction of Jeffrey Dahmer’s school years. The film comes with a script from Alan Trezza who directed the original Burying the Ex (2008) short film and wrote the screenplay when it was later made into a feature film by Joe Dante with Burying the Ex (2014).

I liked We Summon the Darkness in its opening scenes. The banter between the girls and the guys as they meet up in the parking lot feels as though it had been written by someone who grew up during the 1980s and had a real passion for the name heavy metal bands of the day. It comes with the authentic flavour of autobiographical writing.

The only quibble about the film’s portrait of the era is that the girl’s only have regular size hair and not the era’s prevailing trend for big hair (especially given that we see Maddie Hasson wielding a can of hair spray at one point). There is also the irony of the fact this is a film made about the 1980s that is enacted by a group of faces that hadn’t even been born during the decade. That is all except for Alexandra Daddario, one of the film’s two recognisable names, who manages to be convincingly cast as a teenager at the age of 34 – she’s now into her second decade of playing teen Girl Next Door types.

The film does a fine job in the build-up and then at the 33-minute mark pulls a twist that works extremely well. [PLOT SPOILERS]. From the moment the film opens, the girls are the sympathetic point-of-view characters. There is talk in the background on the radio and in some of the dialogue in the carpark about the spate of Satanic ritual murders being conducted across multiple states. As the girls go off with the guys, we expect something bad to happen – that the guys will be revealed to be the Satanists, or that everybody will be attacked by cultists.

[PLOT SPOILERS CONTINUE]. Only as they sit around getting drunk and playing Never Have I Ever, Alexandra Daddario abruptly comes out with the line “never have I ever drugged anybody’s drink” and the other girls assent before the guys promptly fall over unconscious. This throws everything that we expect is going on entirely on its head. Not to mention the even more subversive twist that comes next where it is revealed there are no Satanists, that the girls are part of a church group that has been faking the ritual killings in order to drive up attendance.

On the other hand, it is as though We Summon the Darkness has fired its only effective bolt off and after a perfect start the rest of the show is a slow downhill coast as it loses the momentum that came from that twist. For one, I had a good deal of difficulty believing the set-up. The girls do not at all convince me they are loyal churchgoing Christian types. They never seem to mouth or practice any faith or hold any of its moral values – Maddie Hasson, for instance, seems to spend every scene she is in either drinking, lighting up a joint or coming onto the boys, things that are usually looked down on in Christian social circles. You’d expect the girls to be more reserved, at the very least have some moral issues about the guise they are maintaining even if it is only a pretence.

Moreover, the rest of the film simply becomes a game of survival with various parties and occasional outsiders running around a mansion trying to kill one another. We have seen this type of film done before with the recent likes of Monster Party (2018) and Ready or Not (2019). There’s a few other twists but Marc Meyers delivers nothing new or even particularly dark, twisted or tense. All of which seems a let-down after a fine build-up.