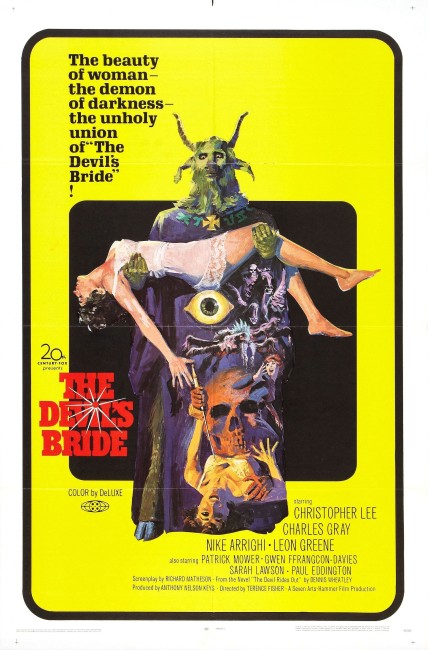 aka The Devil’s Bride

The Duc de Richleau and Rex Van Ryn arrive for dinner at the home of their good friend Simon Aron. However, Simon has forgotten about them and is instead holding a function of his astronomical society. De Richleau realizes that the astronomical society is in fact a coven of Satanists who are led by the powerful and charismatic Mocata. He and Rex knock Simon out and whisk him away. However, Mocata influences Simon’s mind from afar and draws him back. Rex and de Richleau burst into a Satanic ceremony held by Mocata and rescue Simon and another girl Tanith before Mocata can complete the rites of Satanic baptism whereby they will irrevocably forsake their souls. Holed up at his niece’s country estate, de Richleau creates a protective circle as Mocata wields all the dark forces under his power over one long night to get back the souls of Rex and Tanith.

A cult surrounds the late English horror director Terence Fisher. Terence Fisher was the director responsible for some of the greatest and most influential films in the early days of Hammer studios, including The Curse of Frankenstein (1957) and Dracula/The Horror of Dracula (1958) and all their remakes of the Universal horror classics. However, after disagreement with their handling of his remake of The Phantom of the Opera (1962), Fisher left Hammer and went to work at other studios for a time. In the late 1960s, Fisher and Hammer made up and he returned, during which he time would make his two greatest films, The Devil Rides Out and Frankenstein Must Be Destroyed (1969).

The Devil Rides Out was based on a 1935 novel by British writer Dennis Wheatley (1897-1977). Wheatley is an interestingly controversial figure. A veteran of World War I, Wheatley was a prolific writer and produced a number of works on the subject of Satanism, black magic and the occult. These found an extraordinary popularity – at one point, Wheatley was selling a million copies a year in the UK (although his work has considerably tapered off in popularity since then). Today, Dennis Wheatley’s work is dated and stodgy – he was a heavy user of the ‘info-dump’ and would spend pages detailing various occult practices. One strong aspect that has clouded Wheatley’s work today is his politics. Wheatley was an ardent British imperialist and an anti-Semite, while a number of his Wartime thrillers speak out with admiration of Mussolini, Hitler and Herman Goering. The Devil Rides Out is generally considered Dennis Wheatley’s best work – certainly the characters of the Duc de Richleau and Rex Van Ryn were his most popular and he spun their adventures out in a further nine books.

This Hammer adaptation of Dennis Wheatley’s book was scripted by American horror novelist/screenwriter Richard Matheson, author of The Incredible Shrinking Man (1957) and Roger Corman’s The House of Usher (1960), among a great many other works. (See below for Richard Matheson’s other film works). Matheson does a judicious job of trimming much of Dennis Wheatley’s verbosity and letting the story flow.

Under Terence Fisher’s hand, the film is filled with a series of gripping scenes – the car chase as Tanith attempts to escape and Mocata creates mist to make Rex lose the way; or de Richleau and Rex bursting through a Satanic orgy and rescuing Simon and Tanith on the running board of a car. There is a superb scene where Charles Gray’s Mocata comes to visit the house and Terence Fisher subtly focuses on the hypnotic effect of his eyes as he sits in the drawing room bending Marie’s will with the calmness of his voice, while upstairs he is influencing Simon to strangle Richard and Tanith to get a sword from the wall, all of which is broken the moment young Rosalyn Landor innocently enters the room. The scene ends with Charles Gray departing, leaving the wonderfully ominous threat: “I won’t be returning – but something else will.”

The finest scene, and one that has been much imitated, is the stunning extended climax set in the magic protective circle as Mocata tries to break in, preying on them psychologically – through Richard’s scepticism and irrational dislike of the water, an illusion of young Rosalyn Landor being attacked by a giant spider, Rex’s voice calling to them and finally the appearance of the Angel of Death entering on a horse. (There are a surprising number of similarities between this scene and the Soviet film Viy (1967), released the year earlier. To be fair, it is not certain if the Russian film had been seen in the West by this point and the scene is there in the Dennis Wheatley original). The image of the characters at bay from occult forces protected inside a pentagram has been much used since then in everything from the Doctor Who episode Battlefield (1989) to films like Pentagram (2019) and Countdown (2020).

The Devil Rides Out was one of a number of British films during the 1960s that touched upon occult matters, something their American counterparts seemed scared of doing. Others among these included Night of the Demon/Curse of the Demon (1957), Night of the Eagle/Burn, Witch, Burn (1961), Witchcraft (1964), Eye of the Devil (1966), Hammer’s The Witches/The Devil’s Own (1966) and Curse of the Crimson Altar (1968). One has to remember that The Devil Rides Out was made before Rosemary’s Baby (1968) and in particular The Exorcist (1973), which let the Satanic depravities hang out of the closet so to speak, and there is a tameness to it by contrast – the black mass where the Satanists do no more than wear white robes and writhe looks laughably banal. This makes pointed contrast to the other Dennis Wheatley adaptation that Hammer made To the Devil a Daughter (1976), which had no qualms about letting eveything show.

The Devil Rides Out also polarises Hammer and Terence Fisher’s divides of good and evil far more so than any other film they made. It is like an expose of the hidden dynamic that runs underneath all Hammer films – where humanity is seen as blissfully ignorant and weak-willed, and where the true issues of good and evil are fought over between two equally charismatic individuals of sternly opposed will. The savant, wielding occult knowledge with scientific brilliance and his crew of light has never been more dynamically wielded than here, even more so than in Terence Fisher’s Dracula. The Devil Rides Out is also the most overtly Christian of Hammer’s films. The only unsatisfying scene is the happy ending, which contrivedly has time reversed to bring good people back to life and wrap everything up without any tragedy.

For once, Christopher Lee essays the role of the hero – Lee became enamoured of the Dennis Wheatley novel and personally persuaded Hammer to make the film. The Duc de Richleau is the savant part that Peter Cushing would usually take and Christopher Lee’s presence gives the role an unusually dark intensity. Indeed, with the Mephistophelean goatee that Lee essays, it is some surprise that he is not the villain character.

As the villain, the film is lumbered with Charles Gray, an actor who has the screen persona of a foppish dandy and certainly made the worst ever James Bond villain in Diamonds Are Forever (1971). Gray lacks much in the way of effectively threatening presence here. Far better essayals of this type of role were Niall McGinnis in Night of the Demon and Ruth Gordon and Sidney Blackmer in Rosemary’s Baby, with in both cases the parts being deceptively offset by the perfect ordinariness of the characters.

Other Dennis Wheatley works to have been filmed are:– the lost world film The Lost Continent (1968) and the occult horror film To the Devil a Daughter (1976), both made by Hammer. Hammer planned several other Wheatley adaptations in the 1970s, but after the extremely free-handed adaptation that they conducted of To the Devil a Daughter, Wheatley wrote an angry letter and declined to be involved any further. The Haunted Airman (2006) was a later BBC tv adaptation of Wheatley’s The Haunting of Toby Jugg (1948).