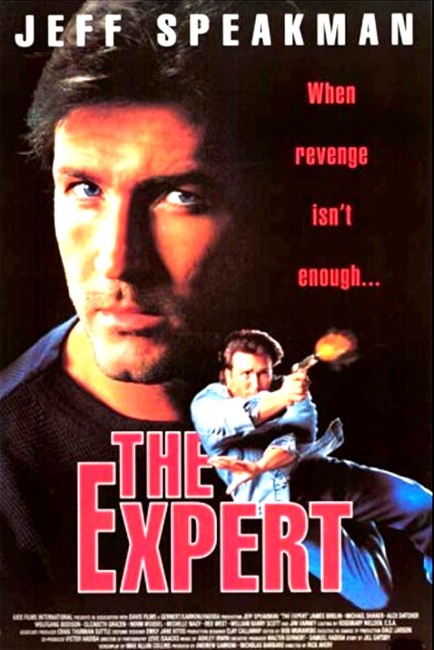 SWAT team commander Jack Lomax is shattered after he finds the body of his younger sister murdered by serial killer Martin Kagan. Lomax’s testimony is pivotal in putting Kagan away in Westgate Penitentiary under the ultra-hardline Warden Munsey. After liberal assistant governor Alice Barnes is appointed to Westgate and looks certain to have Kagan sent to a soft psychiatric rehabilitation facility, Lomax decides to take the law into his own hands and break into Westgate to kill Kagan.

The Expert is a direct-to-video action film that suffers from an identity crisis. The script gives evidence of having wanted to go in one direction at the same time as the director insisted on taking it in different directions. It reminds one a good deal of William Friedkin’s little-seen serial killer/courtroom drama Rampage (1987) – but having been conflated into an action movie.

On one hand, the film gives the impression of wanting to put a serial killer into the courtroom and engage in a discussion (for which read demolition) of the various psychiatric vs free will arguments over the insanity plea and elsewhere to similarly engage various associated issues like the liberal vs the hardline penal system, the liberal parole system, the death penalty and whether child abuse can be offered as exculpatory of disturbed adult behaviour.

The arguments are clearly swayed in favour of the right wing soapbox with Michael Shaner’s killer painted as a smiling psychopath who gleefully abuses and twists the liberal system to his advantage. The only solution for such a contemptuous abuser of the system, the film sees, is vigilante justice – for hero Jeff Speakman to break into the prison and execute killer Michael Shaner himself after he manages to fool the system.

On the other hand, the film does not entirely make its arguments black-and-white. The lines are blurred far more than say they are in the similar Just Cause (1995). In the prison, for instance, Alex Datcher’s recklessly liberal reformer and the sadistically hardline warden (James Brolin in a rare villainous role and having the time of his life) are both seen as being as bad as one another with the film sitting in the middle and taking neither’s side. Similarly, the scenes surrounding the death sentencing of one of the inmates are portrayed in sympathetic terms that suggest that the victim may well have been sentenced innocently.

Unfortunately, the film gives the impression of starting with a script that wanted to at least raise some issues, if not exactly deal with them in a profoundly original or even that literate a way, before it was taken over and turned into an action movie. It is only in the latter quarter that the film breaks away from being a courtroom/prison drama to open out into the action film that it has been wanting to be all along. Up until that point, the insertion of gratuitous action scenes jars badly.

Particularly obnoxious are a couple of sequences – one where hero Jeff Speakman slaughters, rather than disarms, every single one of a group of armed hillbillies, and another where he beats up and smashes the car of a group of drunks who run him down in alley. The unquestioning righteousness of these acts, sanctified solely by the fact that the hero is conducting them, is repellent. In the end, whatever argument the script may have offered up to justify its case in having the hero, given no redress for his hurt in the face of a frustrating liberal justice system, take justice into his own hands, is reduced to the most mindless form of brutal vigilantism. Nor is it ever made clear who the titular expert is meant to be.

Rick Avery, better known as a stuntman, went onto make only one other action film with Deadly Outbreak (1996). Screenwriter Max Allan Collins went onto direct Mommy (1995) and Mommy’s Day (1996). For some reason, the IMDB insists that the film was written by low-budget director Larry Cohen, although Cohen’s name does not appear on the credits.