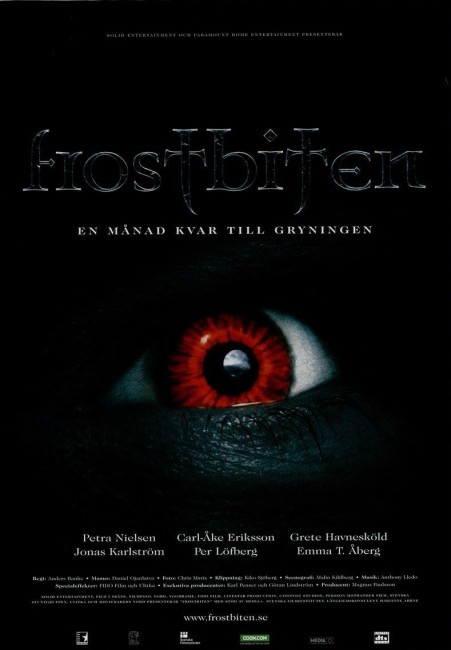 Annika Wallen and her teenage daughter Saga move to a town in the north of Sweden that is currently undergoing a month of midnight. Annika takes up a position at the local hospital where she has been impressed with the work of geneticist Gerhard Beckert. She finds that Beckert tends only a single patient – a young girl Maria who lies in a coma. At school, Saga is befriended by Vega and invited to a party. The resident Sebastian enters Maria’s room and takes some of the pills that Beckert has left at her bedside. Sebastian’s friend fools him into believing that the pills are Ecstasy and he takes one. Soon after, he experiences strange effects, including hearing dogs talk and being consumed by a need to drink blood, while he is also driven away by crucifixes and garlic. Annika is then bitten by Maria. When she tells Beckert this, he knocks her unconscious and takes her to his basement laboratory where he reveals that he is a vampire who was infected while as a Nazi stormtrooper in the Ukraine in 1944. Meanwhile, Vega has taken the rest of the pills from Sebastian and handed them out at the party where everybody takes them and soon turn into vampires.

Frostbite is a Swedish vampire film. It did not attain much notice at the time, although it did receive an English-language release at several fantastic film festivals and made it to dvd release. The Swedish vampire film would have to fully wait for the acclaim of Let the Right One In (2008) before taking off.

Frostbite starts promisingly with Nazis in the frozen north encountering something supernatural in a house. This suggests we are in for something akin to The Keep (1983) or the spate of World War II supernatural films we had a few years ago – The Bunker (2001), Below (2002), Deathwatch (2002). Although, once Frostbite arrives in the modern day, it abandons this and becomes something very different in tone. The bulk of the plot follows three different story strands – Petra Nielsen as the doctor/mother discovering that the hospital head whose research she admires (Carl-Åke Eriksson) is a vampire; a resident (Jonas Karlström) who takes one of the doctor’s pills and transforms into a vampire; and Petra Nielsen’s teenage daughter (Greta Havnesköld) who is invited to a party where the partygoers take the pills and transform into vampires en masse.

The problem with Frostbite is that director Anders Banke seems unsure whether he is making a straight horror film or is wanting to turn it into a black comedy. A muted sense of black humour runs through the film. This becomes especially potent when Jonas Karlström starts encountering talking dogs, including an hilarious scene with his girlfriend’s dog telling him “You’re going to burn.” There is also a moderately effective scene where Karlström goes to his girlfriend’s parents’ place for dinner, only to find that her father is a minister and he cannot shake hands, that he is unable to say grace at the dinner table and then that the meal is sea bass cooked in garlic, forcing him to run away, whereupon he is next seen in the hallway devouring the family’s pet rabbit.

At other times, you are not certain if scenes are intended as black humour or not. There are some appealingly surreal images – like the house with the vampiric teenagers crawling all around the outside; or the bizarre scene where the man walking his dog stops by a lamppost for it to pee, the dog is lifted up from off-screen, drained of its blood and then flung back. Frostbite needed more of these scenes.

Anders Banke’s development of the film is far too laidback by half – the film needs a snappier tightness, which you would certainly get if Frostbite were an American production. It often feels like the film is driven more by the characters reacting to situations than it necessarily is by a plot that is going somewhere. There are some effective effects scenes with the vampires crawling around ceilings and walls, although the full body version of the Beckert vampire looks uneven. The movement between the various parallel plotlines is denoted by distracting wipes across the scene and often come inopportunately timed in terms of a scene’s pacing. Despite moments, Frostbite feels like it should have been either much funnier or sharper than it is.