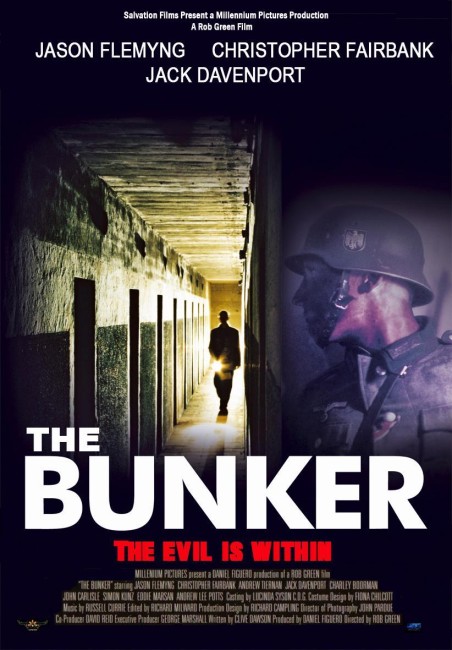 October, 1944, during the middle of World War II. Hotly pursued by American fire, a group of German soldiers take refuge at a bunker near the Belgian border. All personnel and supplies have been commandeered to fight the Allied advance and the only people left manning the bunker are an old man and a young boy. As they settle in, some of the men disappear in the tunnels beneath the bunker and later turn up dead. The old man tells stories of the tunnels being haunted by the plague-infected dead that were buried alive there during the Middle Ages. Others believe that the Americans have found a way in. As paranoia grows about what lurks in the tunnels, the group must also deal with the crazy, drug-addled Schenke who assumes command.

The Bunker is a British-made horror film that emerged in 2003 with reasonable word-of-mouth. It reminds considerably of Michael Mann’s The Keep (1983), which similarly took the unusual perspective of telling a horror story from the point-of-view of German soldiers pitted against supernatural evil and similarly confined its characters within a forbiddingly claustrophobic space. The Keep disappointed as Michael Mann became sidetracked away from telling a horror story by artily stylistic pretensions.

This is not a problem for director Rob Green here. Green is solidly grounded in what a horror film requires and concentrates on wracking up the spooky tension. Indeed, The Bunker could be construed as being the film that The Keep should have been. One could also draw comparisons between The Bunker and David Twohy’s underrated Below (2002), which came out around the same time. It too takes a World War II setting and features armed services personnel inside a confined space being haunted by a supernatural force that is seeking retribution. (Not the least of the similarities between The Bunker and Below is that both films feature British actors Jason Flemyng and Christopher Fairbank).

The Bunker also has a remarkable number of similarities to another British film that came out shortly afterwards, Deathwatch (2002), which featured British soldiers facing something supernatural in a WWI German trench. One could maybe draw even further comparisons between The Bunker and Dog Soldiers (2002), another contemporary-set low-budget British horror film that came out around the same time, featuring soldiers fighting off a supernatural menace.

Rob Green succeeds in generating a considerable degree of suspenseful tension. He has a fine ability to draw excellent characterisations out of his actors. (That is if one is prepared to extend the film the slight improbability the film asks of us in seeing German soldiers talking with various provincial British accents). The central menace is kept shadowy and the film hovers in an ambiguous place between whether it is zombies, the resurrected dead from the Middle Ages or the more mundane menace of the Americans having invaded the tunnels.

However, where The Bunker fails to work is in its eventual payoff. One can see what Rob Green was trying to do but the eventual resolution where the film seems to suggest that the soldiers are being haunted for their execution of deserters seems weak and uncertain, ruining a good build-up. Unfortunately, in the unusual position that the film takes – the point-of-view of German soldiers – it is hard to feel particularly horrified about the idea of the group being haunted by deserters they executed when one is confronted by the actuality of history where German soldiery massacred entire towns for standing up against them, hung protestors from lampposts, brutalised the elderly in the street with rifle butts, not to mention the entire body of atrocities that occurred in the concentration camps. Now, if the film had had the soldiers being haunted by any of these things, it would have had some bite. As it is, it seems tame. One feels that if you want to use Nazis as characters in a film, you had better justify the use of them as they carry a great deal of loaded imagery.

One also has the suspicion that The Bunker might have worked better if the parts of the soldiers had been rewritten as British (perhaps during World War I), which would not have taken much effort to do. While the British did shoot deserters during the Great War, there is the sense that it was a just war and the idea of soldiers being haunted by guilt over their actions would have far greater effect.

Rob Green has yet to direct another film. He did write the haunted house film House (2008) and the science-fiction film Scintilla/The Hybrid (2014).