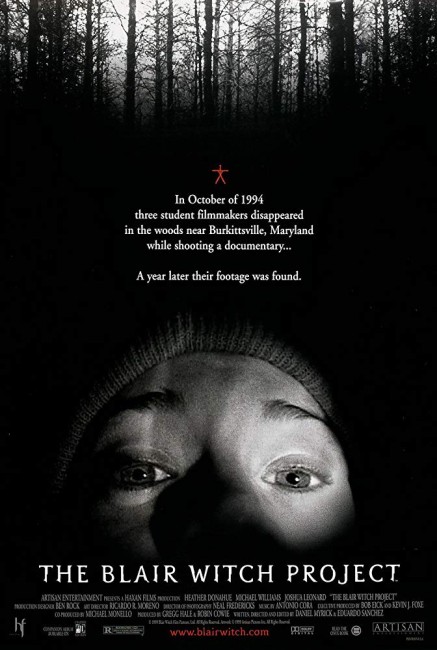 Video footage has been found left behind by a group of students that went missing in Burkittsville, Maryland in October, 1994. The three students went tramping in the woods, intending to make a documentary about a local legend known as the Blair Witch. The three became lost in the woods, which served to being out fear and tension within the group. Next, they found themselves being haunted by strange noises in the night and something that left piled stones outside their tent.

The Blair Witch Project is one of those remarkable success stories that sometimes occur. It came at a time when one had despaired of the death of low-budget film at the multiplex, supplanted by studio-driven audience-pleasing product. Moreover, one never thought they would see the day when a film shot on video would become a major box-office success. The Blair Witch Project was the single entry at the 1999 Sundance Film Festival that had everybody talking. After being whipped up for release, it was one of those rare examples of a film being carried from nothing to a big box-office hit solely by word of mouth and the internet (and no doubt the help of a few judicious reviews that called in the scariest movie ever made).

The Blair Witch Project has none of The Haunting‘s ghostly cherubs, angels of death or collapsing bedrooms, all it has is something as low key as a mound of stones piled outside a tent and most overtly an eerie series of stick figure wood carvings in the branches, yet it was regarded as the most terrifying scare show of the 1999 season. In comparison, The Haunting fell off and flopped after its opening week while The Blair Witch Project, showing on far less screens, completely outstripped The Haunting in terms of revenue and in terms of the number of attendees per screening and became the tenth highest grossing film of the year.

One of the things that managed to keep audiences transfixed about The Blair Witch Project is its clever replication of an amateur video documentary. Many left the theatre certain that what they had seen was a real film. The filmmakers’ mimicry of pseudo-amateur footage is conducted with a remarkable degree of skill and assurance (and one that cleverly allows the filmmakers to make the most of no-budget resources). The Blair Witch Project is, when you think about, even though the filmmakers give no impression of ever having tried to do so, the most successful film at following Lars von Trier’s Dogme 95 manifesto – Blair Witch follows a good many Dogme rules regarding no sets, no special effects and handheld camerawork. The Blair Witch Project was not entirely the first to do this – the previous year there had been the fascinating The Last Broadcast (1998), which prefigures many of the things here – but Blair Witch popularised it. In the next few years, this would become known as the Found Footage film and gained widespread popularity, particularly in genre material.

The Blair Witch Project is a film lacking in any of the cliche horror reactions. In one scene, which pointedly punctuates the insistence that this is not a generic horror film, Joshua Leonard turns the camera on Heather Donahue, reducing her to tears as he taunts her about her ambition to be a moviemaker, asking her what would be happening now if this were a cliche movie. The scenes as each of the three are gradually broken down contain a great deal of emotional rawness and a realism that one is never likely to see in your average stalker movie – like Heather Donahue’s hysteria at finding the same stream again and realising that they have just travelled in a circle, or her outburst at finding that Mike kicked the map away. Far more so than any psychological ghost story, the film is a study in the psychological pressures of a group lost in the wilderness.

For all the ‘scariest movie ever made’ label that The Blair Witch Project was given, the actual number of scares are not that many. There is a terrifying scene at the end where Heather Donahue turns the camera on herself and tearfully narrates a goodbye letter, fully expecting to die. Part of the reason for the realism of the film is that it is the real thing – directors Daniel Myrick and Eduardo Sanchez filmed in the wild and used such tactics as running up and spooking cast members during the night and filming the resulting footage. Not a great deal is ever explained about what is happening and the ending seems to come abruptly but The Blair Witch Project remains a uniquely original work that is all the more effective for venturing into an almost forgotten realm of unseen horrors.

Book of Shadows: Blair Witch 2 (2000) was a disappointing, although not entirely uninteresting, sequel. Sixteen years later, Adam Wingard returned to the franchise with a third sequel Blair Witch (2016).

Directors Daniel Myrick and Eduardo Sanchez next acted as ‘executive consultants’ (something that featured heavily in the promotional publicity) on the short-lived tv series Freaky Links (2000), which used the same shot-on-video look in an initially promising series about an internet site that investigated the occult. Surprisingly, it took Myrick and Sanchez a number of years to subsequently capitalise on the success of The Blair Witch Project. Daniel Myrick eventually returned as producer of genre vehicles like Rest Stop (2006), Sublime (2007), Alien Raiders (2008), Otis (2008), The Presence (2010) and as director of Believers (2007), The Objective (2008), Solstice (2008), Under the Bed (2017) and Skyman (2020). Eduardo Sanchez eventually returned to direct the alien abduction film Altered (2006) and the horror films Seventh Moon (2008), ParaAbnormal (2009), Lovely Molly (2011), the A Ride in the Park episode of V/H/S/2 (2013) and Exists (2014).