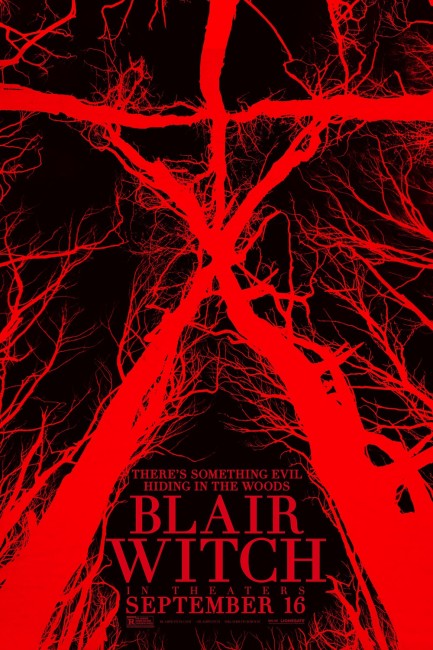 James Donahue, the brother of Heather Donahue who went missing in the Black Hills Woods near Burkittsville, Maryland fifteen years earlier, now discovers video footage that indicates she might still be alive. He and his girlfriend Lisa, along with another couple of friends, head to Burkittsville armed with video cameras to investigate. They encounter Lane, who posted the video online after finding it in the woods. Lane and his girlfriend Talia insist on coming along to lead them to the location where they found the tape. Once camped in the woods, the group realise that Lane and Talia are faking evidence. However, they then become lost and hunted through the forest by something terrifying.

The Blair Witch Project (1999) is an indisputable classic. There are few films that could be said to have inspired an entire new style of filmmaking but it is to The Blair Witch Project that we owe the creation of the Found Footage film. Much that has become part and parcel of the genre – the idea of a group of people being pursued through the woods by an unseen menace filming as they go, the blurry headache-inducing handheld footage – began there.

It is some surprise that the Blair Witch series did not take the same path that the Found Footage hit Paranormal Activity (2007) did a few years later and spin off a series of sequels, turning out more and more until the public became sick of them. Certainly, the success of the original was so big at the time that it would have warranted this. The Blair Witch Project underwent one sequel with the not-uninteresting Book of Shadows: Blair Witch 2 (2000). This is however regarded as a universal disaster and has turned up on some of the Worst Sequels of All-Time lists that populate the web. It is entirely possible that the negative reaction to Book of Shadows is what singlehandedly killed Blair Witch off as a film franchise. (Indeed, nothing from Book of Shadows is even referred to in this film).

A third film finally emerges here with Blair Witch. The film was apparently shot in secrecy in Vancouver (as opposed to the real Burkittsville) under the title The Woods. The public did not know that it was a Blair Witch film until a trailer aired at the San Diego Comic-Con, two months before the film’s wide release. The film received a mixed response and did poor box-office, earning only $20 million domestically, considerably less than the $148 million the original earned seventeen years earlier. This could well be that the modern 18-24 demographic had no familiarity with the original or simply that everyone was getting tired of Found Footage.

Blair Witch comes from Adam Wingard, a name that been on the rise in recent years. Wingard first appeared with the horror film Home Sick (2007) and then gained festival acclaim with the hallucinatory Pop Skull (2007), followed by the serial killer film A Horrible Way to Die (2010) and the non-genre What Fun We’re Having (2011) and Autoerotic (2011) before gaining increasingly wider recognition with the likes of You’re Next (2011), The Guest (2014) and subsequent to this the English-language remake of Death Note (2017) and Godzilla vs. Kong (2021). Notedly, Wingard has ventured into the Found Footage film before with his segments of the anthologies V/H/S (2012) and V/H/S/2 (2013), while A Horrible Way to Die was also shot in a grungy mumblecore handheld style.

As Blair Witch sets in with its predecessor’s familiar style, you are given cause to reflect on the state of the Found Footage film. Both Blair Witch films almost comes at the opposite end of the cycle – one created the genre, the other comes after it has been overrun by dozens of horror films using the style to the point it has started to feel like the particular vein is worn out and has no new moves left to offer. Even the technologies the two films use are very different. In 1999, the first HDCAM recorders were just coming on the market and most of the film was shot on videotape and old-fashioned movie cameras; by 2016, digital cameras are so prevalent that they are embedded in your phone (indeed, entire films have been shot on camera phones), while the videotape and 16 mm film are almost completely obsolete technologies. Not to mention that this film employs headset-mounted hi-def cameras and drone cameras that were not even invented back then.

The Blair Witch Project was genuinely innovative; Blair Witch comes after the better part of a decade where the Found Footage genre has been milked to death by dozens of imitators. Alas, the familiarity you get is less that of revisiting a classic than of a film repeating moves from every other film in the genre. The idea of Heather Donahue’s brother on a search for her is an interesting hook but thereafter the film plays out in standard ways – scenes with the party becoming lost, bickering, mysterious happenings in the woods, their becoming terrified by what happens.

All the stuff of people being pursued through the forest/house is well and tried material that we have seen in endless Found Footage films. Adam Wingard fails to deliver anything that jolts us out of our seats or with the uncanniness of scenes like the much-imitated end of the original where Heather Donahue comes across Michael C. Williams blankly facing a wall.

The one moment that does work with some effect is when the party encounter Wes Robinson and Valorie Curry who stagger out of the woods in a bedraggled state, claiming to have been lost for five days when only a single night has passed for the rest of them. The film is certainly filled with a great deal of blurred camerawork but one should not mistake frenzied motion for tension.

The other disappointment is that Blair Witch does surprisingly little that is new and original. There is a scene where Wes Robinson expounds on the legend of the Blair Witch, which you wish the film had explored more. The arrival at the house in the forest comes with a good deal of expectation – I kept wondering if the film was going to give us a cameo from Heather Donahue when we arrive – but very little happens once we get there apart from lots of frenzied running around through the rooms and cellar as spindles of light come through the walls. The film comes to a disappointingly abrupt ending. The sad thing about Blair Witch is that the muchly reviled Book of Shadows actually did far more creative and interesting things with the original than this does.