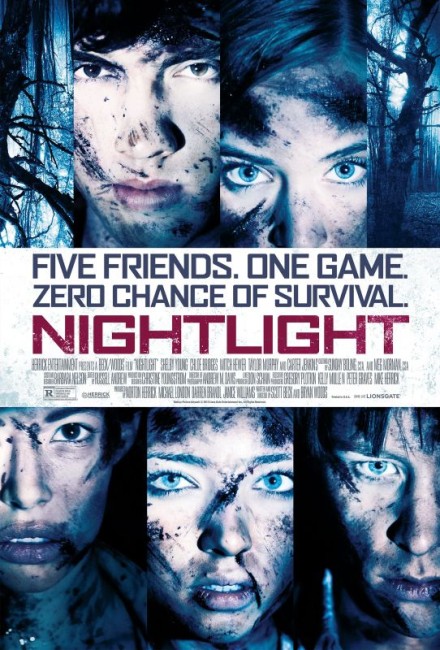 Robin joins a group of friends on a trip into Covington Woods, going along because she finds one of the guys cute. They are intending to play Nightlight – a game of hide-and-seek using torches. Robin is warned that there are things in the woods, that they should never enter the church and never write down one’s name as it becomes an invitation for the woods to claim your life. As the game begins, there appear to be entities in the woods stalking them.

Nightlight is another Found Footage film. Of course, any film about a party wandering into a reputedly haunted woods, becoming lost and subject to supernatural shenanigans cannot help but remind you of The Blair Witch Project (1999), the granddaddy of the Found Footage film. That said, Nightlight manages some sufficiently original touches of its own for a time to stand out with interest.

The film captures your interest from about the point where the characters play a game that involves running along a railway track to see how far they can go before the train comes. It Shelby Young’s and things abruptly get hair-raising as she places the camera on the track just as the train comes into view and runs over the camera as she flees for her life.

There are a number of other sequences that show you that directors Scott Beck and Bryan Woods are determined to grab us by the short and curlies – where Mitch Hewer takes a long fall down a ravine and then a wolf turns and snarls directly into the camera. Some of the games hunting through the woods by torchlight with figures flickering on the periphery achieve quite a haunted feel. I liked also that the film tries to chart an original mythology for the forest – something that prefigures the haunted suicide forest of The Forest (2016) in its ideas.

On the other hand, Nightlight has a number of conceptual ambitions. It is trying to do something more than the regular Found Footage film but these ambitions also cause it to slip into confusion. The film is filled with weird scenes that map over onto others, some that seem dream and not real. There is a very haunted scene where two of the girls fall asleep and then a mysterious third party appears to lift the camera up and move it about, dropping it back down when one of the others come. The film keeps coming back to the scene with the girls sleeping and you are not sure if what happens in the interim is meant to have been a dream or what.

The film feels like it is aiming for something that also unbuckled Book of Shadows: Blair Witch 2 (2000) in leaving you questioning whether what the camera sees is real or not. However, this ends up with a second half where the narrative is disjunct and it is not at all clear why things are happening.

Scott Beck and Bryan Woods next went on to make Haunt (2019) about a sinister Halloween haunted house attraction and to write the screenplay for the hit A Quiet Place (2018) and its sequel A Quiet Place Part II (2020).