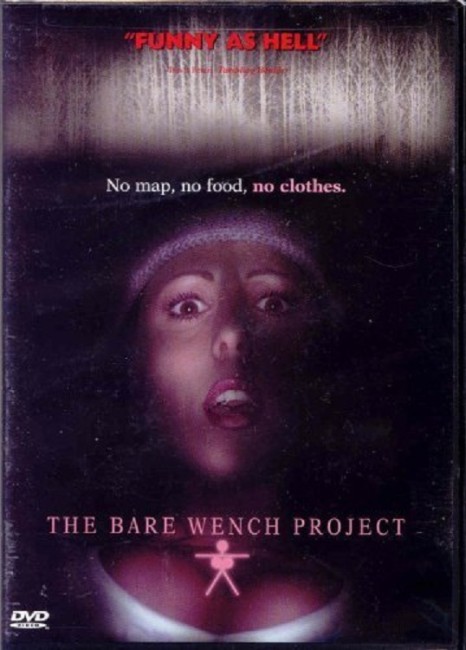 Four female students and a cameraman go hiking up Bare Wench Mountain near Bareassville, Delaware, in search of the legendary Bare Wench witch whose spirit is supposed to haunt the area and erotically possess those who come near.

The Bare Wench Project is one of a number of spoofs that quickly came out exploiting the huge success of The Blair Witch Project (1999). The Bare Wench Project is a softcore spoof. It is directed by Jim Wynorski, a genre hack responsible for the likes of The Return of Swamp Thing (1989), Scream Queen Hot Tub Party (1991), Ghoulies IV (1993), Sorceress (1993), Dinosaur Island (1994) and Vampirella (1996), among others, including a great many other works of softcore erotica. (See below)

The film finds silly, almost any, reason to get the girls naked – for one, they go hiking in the woods wearing bikini bottoms and see-through gauze tops and the camera takes maximum opportunity to focus on butts and breasts. “The twins are sweaty,” one girl comments (in reference to her breasts), whereupon the girls take their tops off and start rubbing their breasts against one another; or impromptu decisions like “Let’s go skinny-dipping.” A rest-break becomes a natural opportunity for a casual lesbian scene in the middle of the trail and so on. In the most ridiculous scene, they sit huddled in a tent while something prowls outside – trying to figure out how to drive it off, they come to the amazing conclusion: “We had our tops off [last time] – quick get your tops off.” At every other opportunity, the girls are flashing, pulling their pants down and preening in the back of shots.

What is even worse than the lameness of this is the skittish giggliness of the girls whose airheaded natter goes on and on and on without end – the male member of the group goes missing in a cave, but rather than investigate they instead make a barbecue and stand around cracking jokes comparing wieners to their boyfriend’s penises. This is a film that is not even taking itself or its audience seriously – as one of the girls candidly announces in the first few minutes: “There is no Bare Wench but we’re going to have fun anyway.” Failing that, a series of outtakes run over the end credits of the film wreck any miniscule suspension of disbelief that may have ever existed.