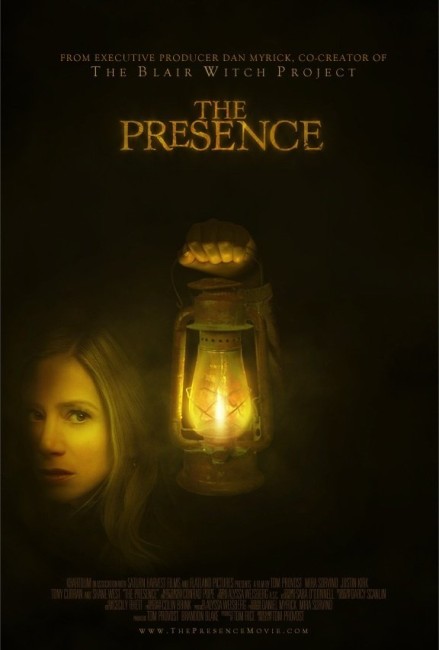 A woman travels up to her the remote family cabin in the middle of a lake to work in solitude on a writing project. She is unaware that the cabin is inhabited by a ghost who silently watches over her. Sometimes she is spooked by noises, doors slamming or things thrown against the outhouse when she is in it. She is joined by her boyfriend. While there, the boyfriend proposes to her. She accepts but soon after starts to change and turn against him. The ghost sees that the mysterious figure of a man in black has appeared and is whispering malevolent thoughts in the woman’s ear. The man in black taunts and tempts the ghost with the offer of being able to be with the woman – but the price he asks is that the ghost kill the boyfriend.

The Presence is a directorial debut for writer-director Tom Provost, who had previously worked as an actor and had written the script for Under Suspicion (2000). The most interesting name on the credits is that of executive producer Daniel Myrick, one of the co-directors of The Blair Witch Project (1999) who subsequently solo directed Believers (2007), The Objective (2008), Solstice (2008), Under the Bed (2017) and Skyman (2020). Myrick also has an alternate career nowadays as a producer of horror films with the likes of Rest Stop (2006), Sublime (2007), Alien Raiders (2008), Otis (2008) and Blair Witch (2016).

In many ways, The Presence is an annoyingly opaque film. But it is also holds an atmosphere that keeps coming back to you some days after watching it. The film captivates from the opening moments as Shane West sits in the cabin. In the first few shots, he seems like a normal figure inside a house but it quickly becomes apparent that it is not – he sits blank and unreactive, has skin that is much paler than usual. Then comes the arrival of Mira Sorvino and, as West hovers in the background, it becomes apparent that he is a ghost. The pace throughout these establishing scenes is the slow, accumulative, atmospherically focused approach of a classical ghost story.

As the film slowly builds, Tom Provost creates something fascinating out of it. Who exactly is the hooded figure that sits in the boat saying nothing as the storekeeper (Muse Watson) across the lake comes to make his delivery – it is a ghost too? Things become even more captivating with the appearance of the enigmatic figure in black played by Scottish actor Tony Curran. In one scene, Shane West sees Curran whispering in Mira Sorvino’s ear invisible to her whereupon her mood abruptly changes.

For the first half-hour, Tom Provost creates a beautifully delicate mood. However, after the point that Tony Curran enters the show, the film heads in a different direction. I am all for films taking chances but it becomes increasingly more difficult to get a handle on where The Presence is going. Who exactly is Tony Curran’s character? With the cryptic mention of ׄ”his master” and pact he appears to offer Shane West, the suggestion we are left with is that he is some type of agent of The Devil, although none of this is particularly made clear. Who is the character known only as The Woodsman who appears out of nowhere at the end to affect an end to the situation? Why does Shane West abruptly appear to Mira Sorvino (the only time he utters any words) and what exactly happens at the end?

The lack of explanations offered prove frustrating and unsatisfying. On the other hand, the final scene as the film goes out with Muse Watson crossing the lake, disappearing into the distance while the hooded figure in his boat whispers in his ears holds something undeniably disquieting.

Tom Provost has yet the follow up The Presence in any way. The IMDB lists that he made a fim called Hypnophobia in 2014, although this does not appear to have been released anywhere as yet.