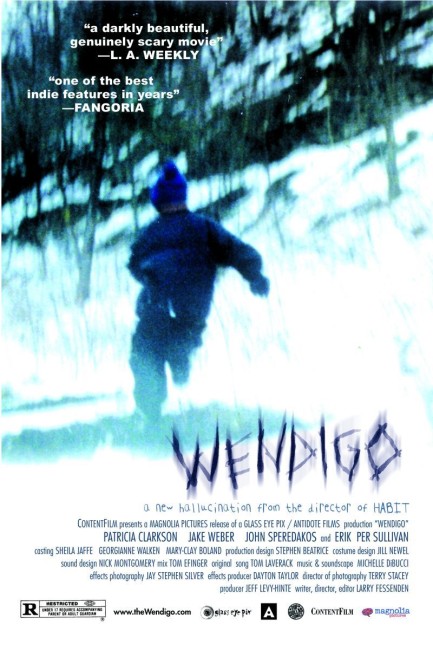 Kim and George McLaren and their young son Miles are driving to a holiday house they have rented in wintry upstate New York when they collide with and kill a deer on the road. This angers a group of hunters that have been pursuing the deer and George has an angry confrontation with one of the group Otis Stuckey. Afterwards, Otis seems to be stalking them at the house. A mysterious Indian tells Miles about the native legend of the shape-changing Wendigo spirit that haunts the area and Miles thinks he sees a Wendigo. While he is out sledding with Miles, somebody then shoots George.

Wendigo was Larry Fessenden’s most professionally made film up to that point – he has a budget that has allowed him to bring in moderately well known actors like Patricia Clarkson and Jake Weber, as well as Erik Per Sullivan, the kid from tv’s Malcolm in the Middle (2000-6). Wendigo is artistically ambitious and well mounted, if not an entirely successful, entry. Larry Fessenden, who says the location was inspired by childhood trips to Vermont, does a fine job of evoking an atmosphere of dis-ease out of a wintry smalltown and its chilly isolation and the threateningly pervasive sinister locals. He is considerably aided to this end by Terry Stacey’s photography.

Unfortunately, Fessenden’s problem is in not letting the film pay off satisfactorily. Partly it is because Wendigo is a typical Larry Fessenden film – Fessenden’s films are based around the observation of incidental detail and the slow introduction of the Other. Wendigo is low key – deliberately so – but not that much ever happens. There is no big plot, just low key character incidences and much brooding, mounting atmosphere. A low-budget slasher film could get through most of what happens here in about 20 minutes. It is, for instance, well over two-thirds of the running time before the first attack occurs. What precisely is happening and where it is all going is vague.

Wendigo invites comparison to the Old Chief Woodenhead segment of Creepshow II (1987). Both films feature people being attacked and an Amerindian figure come to life to exact vengeance on their behalf. Both films are poles apart in quality but Old Chief Woodenhead at least managed to tell the same story arc in a thirty-minute anthology segment; Wendigo, on the other hand, feels like an anthology segment that has been dragged out to feature length. One cannot help but feel that the story would have worked far more succinctly at anthology length, whereas at feature length the entire exercise seems slim.

The ending reached is a surprisingly traditional one and disappoints in paying off on the build-up. One hoped there would be more to Wendigo, as the film has been brought together with a good deal of talent. Certainly, the Wendigo creature, when briefly seen as something like a sculpting made out of tree branches, is a unique and original creation.