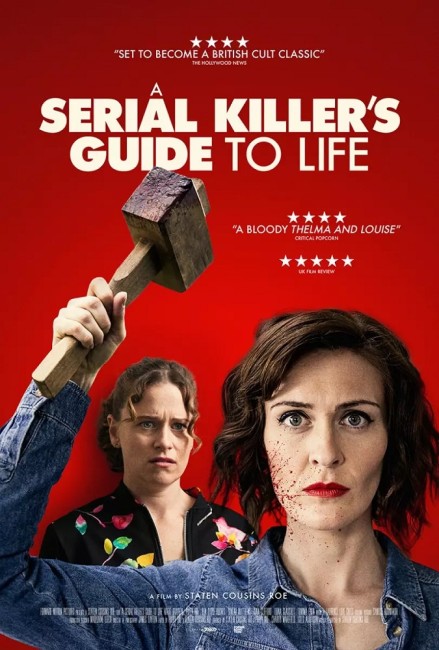 Louise Frank lives with her mother and is a devoted reader of self-help books in an effort to improve her life. While standing in line at a book signing following a talk by one self-help guru, Lou meets and is awed by the self-assured Val Stone who describes herself as a life coach. Val leaves her card and Lou goes to meet her. Val says she is departing on a journey the next morning. On inspiration, Lou decides to join her. Val takes her on a tour where they visit various other self-help gurus and life coaches. Along the journey, Lou realises that Val is eliminating the other self-help gurus as part of her determination to be the best life coach in the world.

This is a film where I didn’t know which way it would go at the outset. My initial assumption was that we would have a cute/absurd mainstream comedy along the lines of So I Married an Axe Murderer (1993) or Serial Mom (1994). On the other hand, the film promptly takes a far darker turn and ends up more in the territory of something like Ben Wheatley’s darkly comedic Sightseers (2012), or perhaps even tv’s The End of the Fucking World (2017-9).

The basic plot kept reminding me of Michael Winterbottom’s underrated Butterfly Kiss (1995). Katie Brayben has the same gormless quality as Saskia Reeves did in that film, someone easily led in the wake of a more dominant unstable personality. In Winterbottom’s film, Reeves was dragged along by a deranged Amanda Plummer. Here Plummer has been replaced by an altogether much more socially assured Poppy Roe, although the story of a girl being dragged along on another girl’s murderous spree is essentially the same. Katie Brayben’s performance as Lou is all soft-spoken, people pleasing ineffectuality. By contrast, Poppy Roe comes sharp-tongued and self-assured.

The film establishes well the banality of Katie Brayben’s dull nowhere life in Brighton, England amid caravan parks and dreary beachfront pavilions; her home life with her mother – having to scrub her back in the bath at one point – which sits at pointed contrast to the clichés of the positive thinking tapes Katie ingests. The film welcomely digs its teeth into self-help gurus and New Age life coaches – everything from Tree Huggers and primal howls in the wild; from a Laughter Yoga group to rebirthers; to a duo who trigger orgasms in the other using sound vibrations.

There is a dry sense of black humour to the film – the girls turning from bashing the head of Owain Rhys-Davies in with a rolling pin to saying “Don’t forget to bring the sandwiches.” On the other hand, this is never a black comedy that goes for the throat or pushes everything into uncomfortable territory as a work like Sightseers does. And often these targets of the satire seem as though they are barn doors broad enough that they barely need to be spoofed.

Where the film does become more interesting is the twist where it reveals [PLOT SPOILERS] (with a certain ambiguity) that Poppy Roe’s Val is actually an imaginary companion/split personality in Lou’s head. It’s a twist that is substantially borrowed from Fight Club (1999) but one the film pulls off to modest effect.

The film was a directorial debut for Statin Cousins-Roe. In real life, Cousins-Roe is married to actress Poppy Roe.