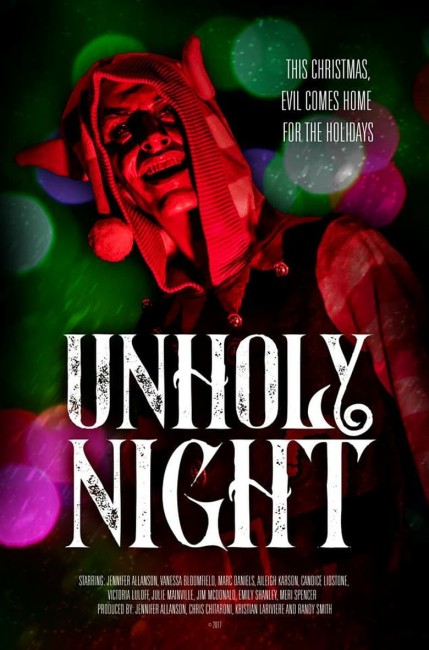 Christmas With the Cannibals

The Elf Made Me Do It

Sympathy for Mr. Iblis:- Lilly works a late shift at the hospital on Christmas Eve. She is asked to take Mr Iblis down to x-ray. On the way, he shows her his scrapbook and tells her tales of horrors that occurred at Christmas. Christmas With the Cannibals:- John joins his girlfriend Alice as they head to her family’s place for a traditional Christmas dinner but there he finds strange things going on in the house. Drunk Dead Debbie:- Sisters Sarah and Katie decide to make an audition video for a bachelorette reality tv show. The two of them start drinking with their friend Ava as they begin shooting the video. There they decide to play a drinking game where they call the name of Drunk Dead Debbie, a girl who died at an office Christmas party after a cruel game by bitchy co-workers, and are startled when Debbie’s ghost appears. The Elf Made Me Do It:- Lilly leaves work and heads to join her mother for Christmas Eve. There her mother insists on locking Lilly in the closet. In the closet, the statue of an evil elf inspires Lilly to stand up for herself and fight back.

There are plentiful Christmas themed films that come out each season, usually made for tv. Amid the horde of wholesome family-friendly fare clogging up tv screens, there is another whole body of Christmas horror films. The Christmas slasher film has almost grown to become its own genre niche with the likes of the very first slasher film Black Christmas/Silent Night, Evil Night (1974), Silent Night, Deadly Night (1984) and sequels, To All a Good Night (1980), Christmas Evil/You Better Watch Out (1980), Black Christmas (2006), Silent Night (2012), All Through the House (2015) and Good Tidings (2016), among others. There have been other Christmas horror films with the likes of Jack Frost (1997), Santa Claus vs. the Zombies (2010), the Finnish-made Rare Exports (2010) with its rampaging Santa Claus monster and a whole bunch of Krampus films. The Christmas horror anthology – a film made up of multiple stories usually with a linking story – had previously been conducted with the also Canadian-made A Christmas Horror Story (2015). (For more detail see Christmas Films).

Unholy Night was an anthology of short films put together by three friends, Chris Chitaroni, Kristian Lariviere and Randy Smith, all living in Ottawa. All three had made a number of horror short films over the previous decade, many of which appeared in Ottawa’s annual Monster Pool short horror festival. Only Larivere had made a feature-length film on his own before with Hens Night (2018).

Unholy Night shapes up promisingly. It is evidently on the low-budget side but through the introductory story and the first episode, the characters seem well rounded and the actors cast are lively and engaging in their roles. Even the evil child that appears at the end of the prologue has an unnerving gleam in her eye.

The first story Christmas With the Cannibals comes with a tone of comic paranoia that reminds of the weirdness of a film like Parents (1989). That said, the humour and everything that happens in the episode is obvious – the title gives the punchline away and the episode takes a not particularly surprising path to its denouement.

The second episode Drunk Dead Debbie also has some amusing characterisations. There is an undeniable sense of humour watching the two sisters as they set out to shoot their audition video and get drunk at the same time. The central premise of the sisters summoning a nerdy girl who drowned in her own vomit at an office party plays out like a party girl version of Candyman (1992). The appearance of Debbie works well and the show goes on the image of the ghost projectile vomiting right into the mouth of one of the sisters in a scene that just keeps on going as you sit grossing out.

The best is the final episode The Elf Made Me Do It, which also serves as a continuation of the linking story and ties back in to the prologue. This is where the film finally gains its feet. You really have no idea where it is going in the scenes with Jennifer Allanson going home to spend Christmas Eve with her mother and then being locked in the closet where she gets advice from the mannequin of a talking elf that urges her to give in to her desire for revenge. This results in the bizarrely funny images of Allanson venting about her abusive childhood as she fights with mother Meri Spencer who refuses to stay dead. Jennifer Allanson (who also produces the film and co-writes the segments she appears in) gives a particularly good performance throughout from the likeably nerdy nurse we first meet to the deranged figure we have by the end of the show.