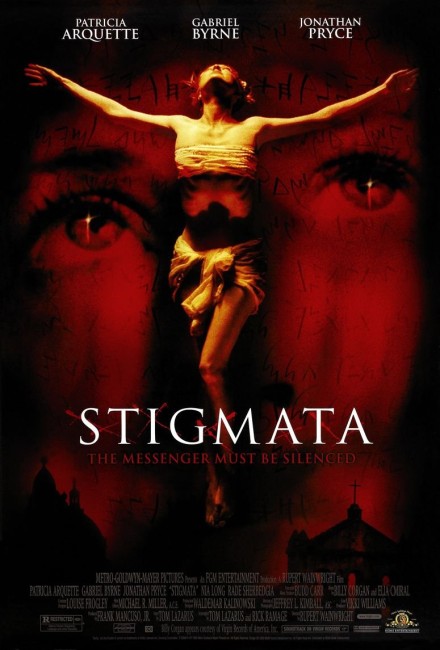 23-year-old Pittsburgh hairdresser Frankie Page is subject to a terrifying and life-threatening series of stigmatic manifestations where her body spontaneously produces the wounds of Christ. The Catholic Church despatches Father Andrew Kiernan, an investigator of miraculous phenomenon, to examine the case. Kiernan, himself divided between science and faith, initially dismisses Frankie’s case, as stigmata are usually only manifested by the deeply devout and she is an atheist. However, he is soon drawn into helping Frankie as she is taken over by demonic forces. As Kiernan translates the Aramaic that Frankie keeps writing while possessed, he realizes that the answer to the forces plaguing her lies in a series of secret Gospels whose truth has been hidden by the Catholic Church.

When it came out, people rushed to compare Stigmata to The Exorcist (1973). While there are many similarities – both stories are about a priest trying to deliver a girl from demonic forces – Stigmata and The Exorcist are also very different films. The greatest point of similarity is that both films come from a strong Catholic background. A good many horror films have parroted the trappings of Catholicism but have never engaged its dogma in any type of discourse.

Stigmata is certainly the most religious Catholic horror film since The Exorcist – which was notedly written by a former Jesuit seminarian. One does not know about either of screenwriter Tom Lazarus or Rick Ramage’s religious backgrounds but Stigmata does comes with the ring of the authentic article about it. It is definitely written with an insider’s academic knowledge of Catholicism – discussions on the correct way that Christ would have been crucified, Gabriel Byrne’s priest offering a brief but effective argument for belief in faith over science, St Francis of Assissi name-droppings. The great controversy over the Dead Sea Scrolls even forms a major part of the plot.

The considerable point of departure that Stigmata makes over The Exorcist is that it does not buy into the party line but makes considerable criticism of the Catholic position. Stigmata posits that the truth of Christ’s message was a personal one that decried any church stricture or structure – “I do not dwell in buildings of wood and stone,” “I dwell within the hearts of men” – and accuses the church of engaging in a cover-up to hide the truth of the scrolls. The problem with this is that it is a bland revelation. Moreover, it is one that The Bible does already state – and in those very words. Nor is the case for the scrolls of St Thomas as clearcut as the film makes out in the end titles – the church’s refusal to accept the scrolls has more to do with questions of authenticity than anything conspiratorial.

Stigmata‘s distributors had strong doubts about the film – and sitting down to watch it it is hard not to see why. From the marketing and the trailer, one goes in expecting to see a horror film but instead finds an earnest theological debate that bravely stands up and criticises Catholicism. One gets the impression that the film started out as a theological debate but became pushed more and more towards being a horror film in order to market it.

As a result, Stigmata seems to sit uncertainly between being either. Case in point being the way a substantial part of the film leads one to believe that Stigmata is a possession story – with scenes of Patricia Arquette developing deep voice and taunting and attacking Gabriel Byrne’s priest. Contrarily, the last quarter of the film unveils as a story about church conspiracies over the scrolls where the possession is then revealed as something benevolent in nature – a priest trying to continue his translation work after his death. Unfortunately, this does not explain away the other less than benevolent possession scenes, which give a strong impression that Patricia Arquette has been taken over by a far more sinister force.

For all its confusions, Stigmata is an intriguing film. Certainly, few other horror films engage in such theological debate. It is made never less than interesting thanks to director Rupert Wainwright’s excess of style. The film gives the impression of being a head-on collision between Se7en (1995) and a Madonna video. Rupert Wainwright was a former music video director and readily co-opts the imagery-dense visuals of MTV – and to clinch that Stigmata is a horror film for the MTV crowd there is a soundtrack from Smashing Pumpkins lead singer Billy Corgan. The film overspills with stylistic effect – overexposed light sources, backlit rain, blurred motion camerawork, striking and incongruous fore– and background detail. Rupert Wainwright launches into the Catholic iconography with elan – blood dripping in slow– and reverse-motion, underlit crucifixion friezes, fluttering doves, closeups on rosaries and crucifixes. Although one cannot help but think what strange bedfellows one has ended up with when you get an earnest theological debate shot as a feature-length MTV film with a Smashing Pumpkins soundtrack.

Director Rupert Wainwright had previously made his feature film debut with the children’s film Blank Check (1994). Wainwright stayed with genre material and went onto direct the disastrous remake of The Fog (2005) and has not made a film since.