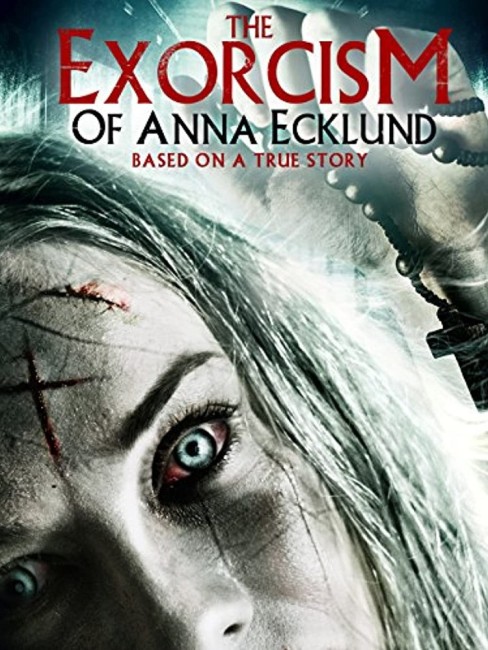 Father Richard Lamont is assigned by The Vatican to perform an exorcism in the British village of Earling. He confesses to local priest Father Theo Reisinger that he thinks he has lost his faith. They go to assess Anna Ecklund who is being held in a convent where she is manifesting a deep voice, contorting her body, taunting people with personal knowledge and speaking in Latin. As they begin the exorcism, Richard begins to learn of the unique abilities that Anna has.

Like a number of these films, The Exorcism of Anna Ecklund claims it is based on a true story. In this case, Anna Ecklund was a real person (real name Emma Schmidt) (1882-1941) who lived in Earling, Iowa. She reportedly exhibited a revulsion to holy objects, refused to enter a church and unnatural sexual interest. The German priest Father Theophilus Reisinger performed an exorcism that started in 1912 and was again repeated in 1928. A book was published about this with Begone, Satan! A True Account of an Exorcism in Earling, Iowa in 1928 (1935). That said, Andrew Jones doesn’t seem particularly concerned with the facts and does what Emily Rose did and creates an entirely original story and sets everything in the present-day.

In this regard, Andrew Jones does nothing to vary from the cliches that have become entrenched in the genre since The Exorcist (1973) and which these abovementioned films repeat ad nauseum – Catholic priests as the frontline defence against demons and regarded as the defaults experts in possession; the priest hero who has lost his faith; the possessed girl in cracked face, chained to the bed, wielding psychic powers, taunting the exorcists with knowledge of their personal lives (this version is fairly PG-rated and dispenses with all the usual obscenities); the ritual chanted in Latin with the crucifix burning the possessed girl’s face where it touches her. Jones cycles through these and does nothing to vary from all the usual cliches.

The ending is the only point the film goes off in different directions. It is revealed that Tiffany Ceri’s Anna had miracle healing abilities and that the demon sought her because it desired to corrupt such power. This theme also appears in films like Servants of Twilight (1991) and Bless the Child (2000) where we see cultists seeking to control or corrupt those who have miraculous power. Although here it is interestingly wound into the theories of the Jesuit palaeontologist Pierre Teilhard de Chardin and his belief that everything in the universe is evolving towards a unified consciousness, which he called the Omega Point – here Lee Bane is even seen reading a book by de Chardin discipline and theoretical physicist Frank Tipler.