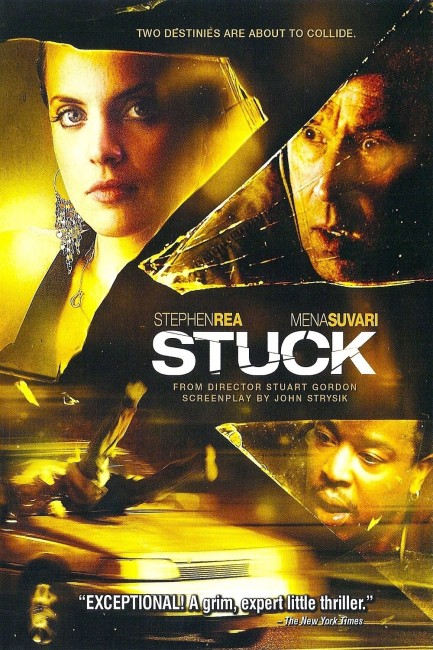 Tom Bardo is tossed out of his apartment because he is behind in his rent, while a job interview he was hoping for goes awry due to misfiled paperwork. As a result, he is reduced to sleeping homeless. At the same time, Brandi Boski, a nurse aide at a geriatric home, learns that she may be up for a promotion. She goes out partying with her boyfriend, the drug dealer Rashid. Driving home under the influence, she is distracted by her cellphone and hits Tom as he is crossing the street. The collision does not kill Tom but leaves him with his torso impacted through the passenger-side windshield of her car. Panicked at what to do, Brandi drives home and parks the car in her garage. As she debates about how to handle the situation, all the while not missing work, she leaves Tom trapped there in the windscreen. As she brings in Rashid to kill Tom and dispose of the body, Tom makes every effort to get free or call for help.

Gordon’s output has slowed down since 2000, having gone from a film about every 1-2 years throughout the 1990s to a total of four films for the entire decade of the 2000s and nothing into the 2010s as yet. Stuck is the last film he has made to date. Moreover, during this time, he has started to veer away from the horror genre he has been associated with, taking on non-genre works like the crime film King of the Ants (2003) and the David Mamet adaptation Edmond (2005). Stuck seems to belong to this move to the mainstream on Gordon’s part. Even though it was seen and reviewed as a horror film, give Stuck another director without a cult following and you suspect it would have entirely slipped by genre notice. It exists less in the horror genre as it does true crime or perhaps an entirely new genre label that you could term ‘tabloid headline adaptation’.

Stuck is based on the true story of Chante Mallard. In Fort Worth, Texas in 2001, Mallard, a twenty-five year-old nurse’s aide, was driving home around 3 a.m. under the influence of drugs and alcohol after partying when she ran into homeless man Gregory Biggs. Unable to remove him from where he had impacted in the windscreen, she drove home and parked the car in her garage. At some point during the next twenty-four hours, Biggs died while still trapped in the windshield. Mallard persuaded her ex-boyfriend to help and he and his cousin dumped the body in a nearby park. The death remained unsolved until four months later when Mallard boasted about killing a white man at a party. She was duly arrested after authorities searched her house and found the bloodstained car and the passenger seat that they had attempted to burn to dispose of evidence. At the trial, medical examiners and emergency responders testified that Biggs would without any doubt have survived if she had done the right thing and taken him to hospital. In 2003, Mallard was convicted and sentenced to a fifty-year sentence for murder.

It should be noted that Stuck announces on the opening credits that it is ‘inspired by a true story’ so there is no onus on it to have to conduct an accurate depiction of the crime. To a large extent, the film sticks with details of the crime as it happened. That said, it also adds a number of other elements that were not present in the press accounts. This is most notable at the end of the film where Stuck departs from the facts altogether and adds a happy upbeat ending. I don’t know if Chante Mallard’s boyfriend was a drug dealer, nor if she sent him out to eliminate the still-alive victim. What I certainly know is that there is nothing in any of the press accounts of the victim fighting back and managing to kill the drug dealer boyfriend.

Although the biggest and most egregious departure from fact is having the homeless man (Stephen Rea) make an escape and walk away, leaving the nurse’s aide (Mena Suvari) crushed against the wall by her own car in a burning garage. The reality is that in all likelihood nobody would have ever heard of the incident were it not one about a woman running a guy down and being charged for murder after she left him impaled in the window of her car to die, as opposed to a story about how the homeless guy eventually made an escape from the situation.

Perhaps one of the oddest elements of the film is the casting of Mena Suvari (who has also signed on as an associate producer). I have no particular problem with Suvari’s performance but it should be noted that the perpetrator of the original crime was African-American and Suvari is not. The film could have cast a Black actress or happily ignored this fact and rewritten it as a story about white folk but the weird thing is that it doesn’t seem to want to do either. Thus you get the feeling that Mena Suvari is playing a part written for a Black woman but for the fact that she is blonde-haired and blue-eyed. Despite this incongruity, the film maintains everything around Suvari as though she were a Black woman – she hangs out in Black clubs, has a Black drug-dealer boyfriend and wears her hair in braided cornrows. It is hard to guess what Stuart Gordon and co were thinking – are we supposed to close our eyes and try and think of Mena Suvari as African-American? Are we supposed to just think that she is a white girl who loves hanging out as part of Black culture? Or is it that Stuck was likely to have better commercial prospects with a white girl cast in the lead? Whatever way, the incongruity of the character and casting creates some weird racial associations.

I had a similar kind of problem with Stephen Rea as a homeless guy. Rea is a great actor and is fine in the role. However, the character seems written by people that have only tiptoed around the issue of homelessness without getting their feet wet. The homeless often have severe mental health issues and/or drug and alcohol dependencies, yet often come up with extraordinary strategies in order to cope. However, we get no exploration of these realities in Rea’s character. He has not even been homeless for a single night! He is just an ordinary guy who goes to work in a suit (ie. not a minimum wage worker either) who’s been turfed out of his apartment and lucked out on a job interview due to bureaucratic mangling. Now, that is a promising story on its own and Gordon does well in drawing sympathy towards Rea in depicting the indifference of landlords, cops and office workers. However, what we are spposed to be watching is a film about a homeless person who is left trapped inside a car window not one about the travails of an ordinary man who finds himself down on his luck. Let us just say that the film would have been far more authentic if the writers had not taken the route of giving us an easy identification figure.

Stuart Gordon has never been one of the most subtle of directors. The dramatic situation here is compounded by thuddingly obvious signposted effects – Mena Suvari having visions of Stephen Rea atop her during sex, highlighted cards for the 911 line or announcements about accident victims on the radio. The other problem with the film is that it is an attention-grabbing tabloid headline but not a particularly strong dramatic structure. Most of the film seems to be Mena Suvari sitting around wondering what to do. There is the occasional cut back to Stephen Rea and potential sources of hope with her cellphone left on the seat, the neighbouring Latino kid and his mother who come and see him there – but not nearly as much as you expect. My feeling is that Stuck would have worked far better if Stuart Gordon had treated it akin to Detour (2013) or Curve (2015), which were both centred around people trapped in buried/overturned SUVs, or Buried (2010) with Ryan Reynolds trapped in a coffin for the running time – films in which the entire tension centres around someone trapped in a small space and the possible avenues for escape followed by the dashing of hopes.

Stuck feels like a film that never hits any of its strides – Gordon seems to miss the survival horror aspect, his black humour is uncustomarily restrained. Nor does it seem to ever be a film about the cruel indifference of others – the film notedly ends after Stephen Rea exits the burning garage where we are asked to regard this as a triumph and forget that the only life he has to return to it is one where he has lost his home and all his belongings and has no job.