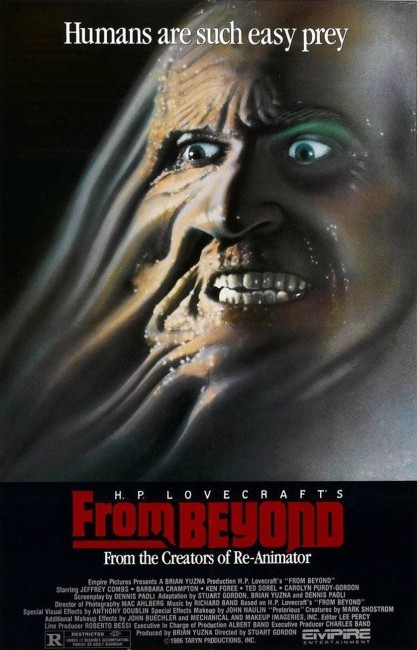 Crawford Tillinghast activates a device designed to stimulate the pineal gland with resonant vibrations. It allows him to see creatures that exist on another dimensional plane – but the creatures then turn and bite off the head of his superior Edward Pretorious. Tillinghast is placed in an asylum. Psychiatrist Katharine MacMichaels is sent to see if Tillinghast is sane enough to stand trial for Pretorious’s murder. Impressed by his patient rationality, she has Tillinghast released into her care and they return to the house to set the experiment up again. Only this time, they succeed in unleashing the creatures from beyond with nightmarish results.

Stuart Gordon has considerable cult success with his splatter comedy Re-Animator (1985), loosely based on an H.P. Lovecraft short story. With such success, Empire and Stuart Gordon returned to another H.P. Lovecraft story to make From Beyond. Here they reunite the two leads from Re-Animator – Jeffrey Combs and Barbara Crampton – and most of the production crew – producer Brian Yuzna, screenwriter Dennis Paoli, composer Richard Band, photographer Mac Ahlberg, and John Carl Buechler and John Naulin on makeup effects.

Certainly, From Beyond has all the things that one expects of a Stuart Gordon film – monsters, slime, bare breasts, OTT splatter effects and tongue virtually super-glued into the cheek – but while there is smoke, the pyrotechnics fail to ignite a second time over. Unlike Re-Animator, From Beyond had great potential to be a film of atmosphere – and there are moments where it is, particularly at the beginning and in the eerie initial reappearance of Ted Sorel.

Here Stuart Gordon succeeds somewhat in creating a genuinely Lovecraftian atmosphere of menaces lying beyond ordinary ken. (It should also be noted that these opening minutes in fact contain the whole of the original 1920 H.P. Lovecraft story – in fact, all the aspects of the short story are over before the bulk of the film begins). The rest of From Beyond degenerates into much running about the house, pink-suffused lighting and slime effects.

The effects were the major highlight of Re-Animator. Stuart Gordon and co aim for something more ambitious with From Beyond but this clearly seems to be beyond the resources of the film. Despite reigning in four different effects houses, what Stuart Gordon ends up with seem like a host of tatty rejects from The Thing (1982). Bar the emergence of one creature at the climax, a blubbery mass of rubber with Jeffrey Combs and Ted Sorel in the midst manifesting multiple limbs as they wrestle one another, the creatures tend to only look like people encased in rubber. Both the brief flying transformation and the third eye point-of-view optical effects look cheap.

Where From Beyond succeeds somewhat is in some of the more tongue-in-cheek elements. There are genre in-jokes like the doctor named Roberta Bloch, after horror author Robert Bloch best known for Psycho (1960), and a scientist called Dr Pretorious, named after Ernest Thesiger’s mad scientist in Bride of Frankenstein (1935). The one joy of the film is Barbara Crampton in bondage gear, discovering the pleasures of S&M – she gives the type of performance that one knows from the moment that she enters with ramrod efficiency and hair tightly bound up that both she and hair are going to be let out and with aces to spare. However, as a whole, From Beyond never achieves the hilarious blackness with which Stuart Gordon conducted Re-Animator.

A better version of From Beyond, which adheres much more closely to the H.P. Lovecraft story and plays it straight, is the 1999 short film made by Vancouver-based director Bob Fugger – see The H.P. Lovecraft Film Festival – North (1999) for review.