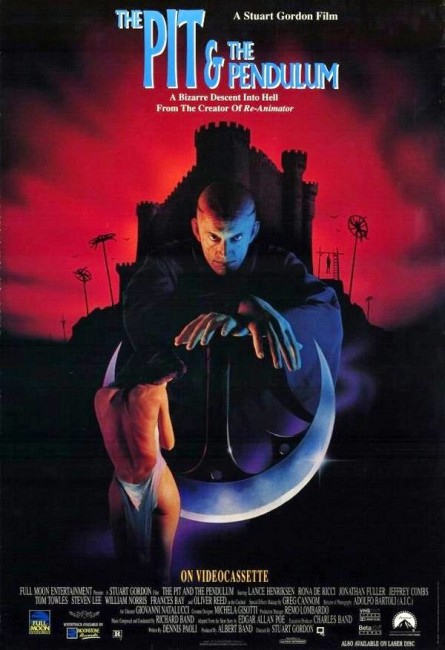 1692 in Toledo, Spain at the height of the Inquisition. The beautiful and kind-hearted baker’s wife Maria Alvarez is arrested as a witch when she inadvertently cries out in horror at the public whipping of a child. As Maria’s husband Antonio tries to save her, Tomas Torquemada, the infamous head of the Inquisition, determines to punish Maria with torture for the desire she inflames in him.

Director Stuart Gordon first came to attention with the black comedy splatter classic Re-Animator (1985) and has since maintained an uneven directorial career. (See bottom of page for Stuart Gordon’s other films). An adaptation of Edgar Allan Poe’s The Pit and the Pendulum (1842) was a long-time project of Gordon’s. Gordon had earlier attempted to mount a production that would have starred Peter O’Toole as Torquemada. Considering the torturedness of the character here, this surely would have been Peter O’Toole’s wildest role, but the project was cancelled in pre-production.

The original Edgar Allan Poe short story is a psychological work wherein an unnamed character lies in darkness in a dungeon as the titular pendulum swings slowly downwards over a period of days. The most we learn about the character is that he was placed there by The Inquisition. All film adaptations of The Pit and the Pendulum have to invent an entire backstory to this single scene in order to bring the piece up to feature length – or more commonly they transplant the pendulum into an entirely different context.

Here the scenes with the person tied up underneath the descending pendulum are of no particular importance to the story – just another in the line of horrors that the central character serves up – and are not even the climactic set-piece as in most other productions. Moreover, the pendulum only turns up at the 76-minute point (out of a 97-minute running time) and is over and done with within five minutes. This version is perhaps most accurate to the scene as depicted in the Poe story than other films versions – having The Inquisition as the agency behind the lowering of the pendulum, and including the scenes with the rats gnawing through the victim’s ropes (in fact, helping him to escape). On the other hand, the events still does not take place in darkness and the film has little of the story’s mood of psychological torture. The script also adds Edgar Allan Poe’s The Cask of Amontillado (1846) to the mix – a story about a man who lures a rival to his cellar on the promise of a rare glass of wine, then bricks him up behind the wall while drunk – which is played out in a rather silly scene with Oliver Reed as a visiting cardinal.

The film at least gets full marks as an adaptation for actually being set during The Spanish Inquisition, which none of the other versions listed below can lay claim to. The film maintains a general adherence to history somewhat – in that there was a character named Tomas Torquemada who headed the Spanish Inquisition, slightly less so in that Torquemada lived two centuries before the film’s stated timeframe. Dennis Paoli’s script takes the interesting step of not only regarding witches as persecuted innocents but also as real practitioners and goes with the notion advocated by many modern Wicca practitioners that witchcraft was not about diabolism and black magic but rather about Earth magic, herbalism and midwifery.

The Pit and the Pendulum 1991 is spearheaded by the Satanic character of Torquemada who is shown wearing belts of nails as penance, keeps Damoclean swords on threads above his bed so that God might strike him down if he is doing the wrong thing, and kneels on broken pottery begging to be whipped to quench his desire. With his head shaven to a pencil-thin tonsure and single cartoonish cowlick, Lance Henriksen appears to be having the time of his life. Unfortunately, Henriksen’s insistence of punctuating everything by flourishes of his hands while mellifluously voicing dialogue with his head to one side proves more distracting than it ever does sinister.

Eventually, the film is done in by Stuart Gordon’s campy, splatter-heavy approach. This sets in from the pre-credits prologue with a skeleton being exhumed and then flogged, sending its bones flying everywhere, and the remains then being pounded down to dust to be used in an hourglass by Torquemada. The prospect of sitting through a grand tour of the Spanish Inquisition conducted as black comedy is something that surely verges on bad taste. Other scenes, particularly the unsettling sequence where Lance Henriksen cuts out Rona De Ricci’s tongue, are played with a disturbing grimness. Unfortunately, Stuart Gordon’s liking for cartoony splatter and black comedy sinks The Pit and the Pendulum as a serious exercise.