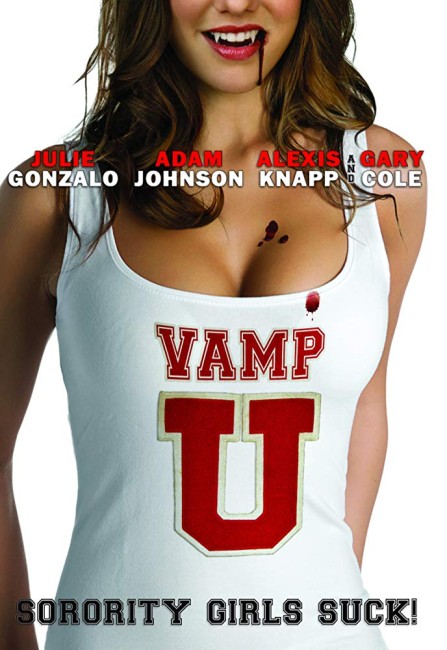 Hawthorn University’s history professor Wayne Gretzky is a vampire. In Romania in 1711, he became carried away and sank his teeth into his true love Mary, killing her. Since then he has been impotent and unable to ‘vamp out’ – extend his teeth in order to bite someone. Fred Green is a student at the university. When his childhood friend Chris Keller registers, he recommends Gretzky’s history class to her. Upon seeing Chris, Gretzky is reminded of Mary and suddenly finds himself vamping out again. He and Chris engage in a heated affair, much to the upset of Fred who has had a secret lifelong crush on Chris. In the heat of passion, Gretzky accidentally sinks his teeth into Chris’s neck. She becomes a vampire and immediately sets about killing people. Gretzky makes the discovery that Chris’s mother is his long lost love Mary who did not die back in 1711 as he thought. He must gain the help of Mary and Fred to stop Chris as she converts all of her sorority into vampires and they turn a blood drive being held at Fred’s frat house into a massacre.

I settled into watch Vamp U with about all the enthusiasm of an unanethetised trip to the dentist. The idea of a vampire frat comedy holds zero enthusiasm whatsoever – still in the back of one’s mind was the excruciating experience that was Transylmania (2009). Perhaps most charitably you can think of Vamp U as a modern equivalent of a 1980s vampire comedy such as Once Bitten (1985), Vamp (1986) or My Best Friend is a Vampire (1987).

Vamp U is a debut feature for its writers/directors Matt Jespersen and Maclain Nelson, the latter also playing the role of the nice guy would-be boyfriend of Julie Gonzalo. The film raised much of its financing via a Kickstarter campaign. This is a clear demonstration of one of the downsides of crowdsourcing. Here at Moria we get sent a good many films from amateurs with no industry experience – some are quite good, most okay and a good many are expectedly amateurish and poorly made. Kickstarter has made it easier for films that would never otherwise have gotten commercial funding to get themselves launched.

Vamp U did manage to get a distribution deal and has turned up on dvd shelves. It shouldn’t have, nevertheless there is a market for it in much the same way as there is always someone out there guaranteed to find films like Transylmania and those of Jason Friedberg and Aaron Seltzer – Epic Movie (2007), Meet the Spartans (2008), Disaster Movie (2008), Vampires Suck (2010) etc – hilarious.

Matt Jespersen and Maclain Nelson’s direction seems to consist of lots of embarrassing scenes where people get flustered and say things they don’t mean. The dialogue and routines just go on and on in a way that is painfully unfunny. The two most consistently awful performers here are lead vampire Adam Johnson and the film’s most well-known cast member Gary Cole who should have known better.

The vampire has taken a beating to its image in the 2010s. We have gone from Bela Lugosi and Christopher Lee who represent the vampire as evil incarnate and a ravening plunderer of maidens to Breaking Dawn Part 1 (2011) and the vampire as decent married family man. Here we even more wimpily get the vampire as a middle-aging professor in suede jacket in the person of Adam Johnson. Johnson’s awkward nice guy vampire performance seems about as far away from Lee or Lugosi as it is possible to get and may possibly be the least threatening vampire to ever be portrayed on screen. (Worse was yet to come however though with Vampire Dog (2012), a children’s film with a cute vampire dog who eats red jelly instead of drinks blood).

The plot is one into which Jespersen and Nelson seem to have put astonishingly little thought. Adam Johnson has mourned his love for three centuries, apparently never having bothered to check that she was dead in the first place, and then by a whopping coincidence she turns out to still be alive in the present-day, living near to the university where he works and to have an identical lookalike daughter who by another vastly whopping coincidence just happens to enrol in Johnson’s class and then engages in a passionate affair with him.

Vamp U also feels like two films – the first half is an unfunny comic romance between vampire professor Adam Johnson and human student Julie Gonzalo, while the latter half forgets about the resurrected love angle and turns Gonzalo into a vampire who proceeds to go amok and create a posse of female vampires. In these latter sections, the film becomes a crudely moronic farce about a jock fraternity defending themselves from attack by the vampire sorority girls. Julie Gonzalo fails to give the girl next door become vampire anything other than an entirely cliche and one-dimensional treatment.

Matt Jespersen has yet to make another film. Maclain Nelson went on to direct the non-genre Mormon summer camp film Once I Was a Beehive (2015) and to co-direct the fantasy parody Dudes & Dragons (2015).