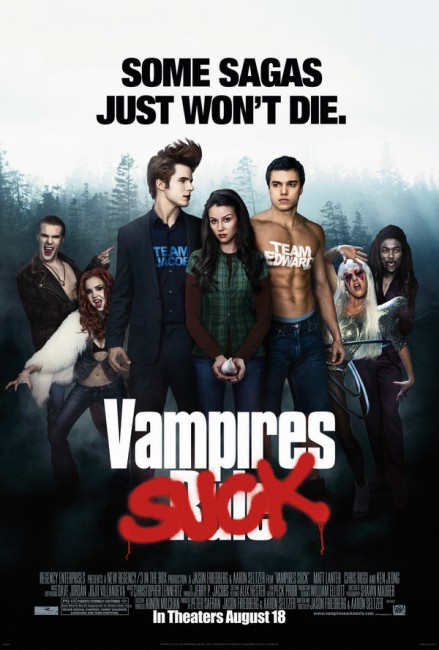 Becca Crane moves to Sporks, Washington to live with her father. Signing into the new school, she befriends the strange Edward Sullen. The two are attracted and then she learns that Edward is a vampire. After Edward’s vampire family attempt to drink her blood at a birthday party, Edward decides that he must leave. Becca now befriends and finds herself falling for fellow student Jacob Black – only to learn that he is a were-chihuahua.

The duo of Jason Friedberg and Aaron Seltzer have now replaced Joel Schumacher in my book as the worst director(s) working for a frontline studio in Hollywood – certainly, far worse than the vox populi favourite of Uwe Boll. As directors/writers, Friedberg and Seltzer have been responsible for films such as Date Movie (2006), Epic Movie (2007), Meet the Spartans (2008), Disaster Movie (2008), The Starving Games (2013), Best Night Ever (2013) and Superfast! (2015), as well as wrote Spy Hard (1996), directed by Jason’s father, and Scary Movie (2000).

All of these are parody films. There is no particular problem with this – there have been many amusing films that parody other films including much of the work of Mel Brooks or the classic Airplane/Flying High (1980). However, Friedberg and Seltzer make films that are pitched to the lowest common denominator and in ways that are insulting to the intelligence. Moreover, they are parody films that lack any back-knowledge about their respective genres – they are more like the equivalent of some airhead teenager’s blatherings about the latest films and celebrity gossip to come out in the last five minutes. Neither Epic Movie nor Disaster Movie, for instance, could even be classified as touching on their respective title genres. Indeed, Friedberg and Seltzer give the impression of being infected with the cinematic equivalent of the amnesia that Guy Pearce has in Memento (2000) – they automatically forget anything that has not come out in the last six months.

I hate Friedberg and Seltzer’s films because they are so utterly moronic in nature. In fact, I refuse to pay money to people who can get major cinematic releases by being self-satisfied and thinking they are clever solely because they can quote other people films and snidely jeer at celebrities. This is why I have taken the step in the case of both Disaster Movie and Vampires Suck of downloading their films rather than paying for them. I do not wish to come out as blanketly advocating download piracy, but equally if Hollywood will treat me as a moron and expect to pay for the privilege, then I fully intend to give the finger to them for doing so. If anyone else has a desire to see this piece of garbage posing as a film then show your contempt and pirate this film and turn Vampires Suck into a box-office flop that will hopefully drive Friedberg and Seltzer to the unemployment line.

There is a rich legacy of vampire movies that is well overdue a decent parody – Mel Brooks strained somewhat more comprehensively than Vampires Suck does in the mostly lame Dracula: Dead and Loving It (1995) and more amusingly in Love at First Bite (1979). However, rather than parodying any of the long line of vampire films, Vampires Suck is, with Friedberg and Seltzer’s typical focus that lazily never goes beyond the latest pop headlines, a parody of the enormously successful Twilight series. The entire film becomes nothing more than a condensed run through that slavishly follows the plots for Twilight (2008) and New Moon (2009) but with the addition of gags. The gags are, as always, dumb and obvious – Jacob Black is constantly displaying canine tendencies such as scratching his ear with his foot, pissing on a fire hydrant and being distracted to chase cats. There are the inevitable gag about him taking his shirt off – “My contract says I have to every ten minutes” – and about Robert Pattinson’s good looks and perfect dress sense. There are lame gags about getting information from Stephenie Meyer’s Twitter page or having Jenn Proske and Anneliese van der Pol exit from a screening of Breaking Dawn and giving away the spoiler about the vampire baby.

Friedberg and Seltzer’s humour is persistently lowest common denominator and in frequent poor taste. Within the first few minutes of Jenn Proske meeting Chris Riggi’s Jacob Black, he says “I grew up on the reservation,” to which she tosses off “Must be great to be able to drink and gamble all day,” while in the background her father and Jacob’s father bash each other with the latter’s wheelchair. The film replays the scene where Robert Pattinson stops the vehicle from skidding into Kristen Stewart but in this case he shoves Jun Hee Lee in the way instead. There are some incredibly unfunny routines with Jenn Proske sleepwalking, or a scene where Diedrich Bader tries to educate her in self-defence and she maces him, kicks him in the nuts and rips off his mustache. Matt Lanter stands over Jenn Proske as she sleeps and romantically sighs, “Just you breathing is the greatest gift in the world to me,” whereupon she gives a loud fart and so on.

Friedberg and Seltzer are constantly throwing in gags that make fun of celebrities of the moment. In the opening scenes, Jenn Proske’s voiceover states her reasons for going to stay with her father: “My mom is always on the road doing some pro-sports star,” whereupon we see her reading a magazine with a picture of Tiger Woods on the cover. Matt Lanter makes Jenn Proske pledge: “Promise me you won’t do anything reckless,” to which she replies, “Ok, I promise I won’t date Chris Brown.” She gets a bloody nose whereupon she tosses off a line about “I guess I shouldn’t have gone partying with Lindsay Lohan last night.” Her voiceover is intruded by the one from Gossip Girl (2007-12), while there are jokes about the Kardashians and Lady Gaga. For some reason, there is a shot where they accidentally shoot and knock an equivalent of Tim Burton’s Alice in Wonderland (2010) down the rabbit hole. To be fair, Vampires Suck keeps tightly to the plot of the first two Twilight films and never keeps piling on random gags from almost any other film of last five minutes vintage as Friedberg and Seltzer’s other films are constantly doing.

On the grudging plus side, you have to admit that the actors chosen resemble their Twilight counterparts with an often uncanny likeness. In particular, Jenn Proske does a perfect job of mimicking Kristen Stewart’s shy plainness. There is the odd vaguely amusing gag – especially some of the parodying of Twilight‘s chastity nonsense with Jenn Proske wondering if Matt Lanter’s being well dressed and not liking sex makes him a Jonas Brother and later gags about her tearing off his chastity pledge ring. It is an obvious target but at least it hits the nail on the head in terms of spearing the moralistic silliness of Stephenie Meyer’s writing.

The Twilight series was also parodied around the same time with Breaking Wind (2012).