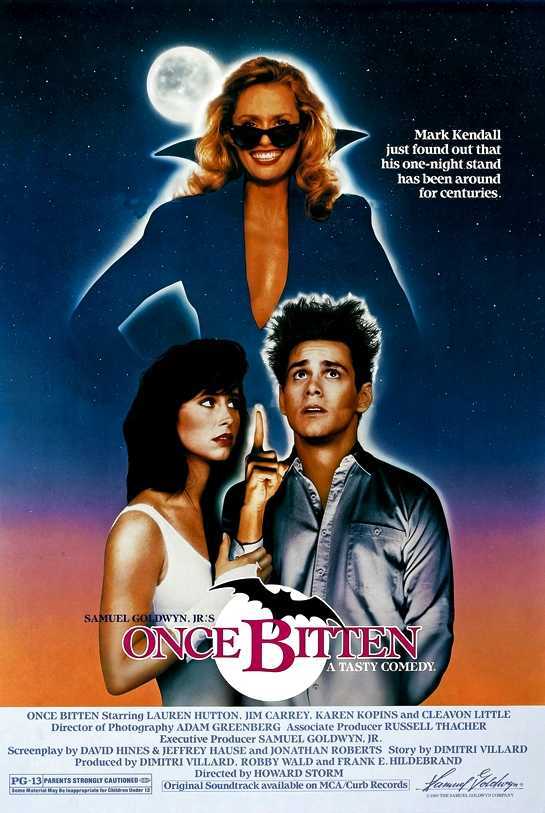 The Countess, a vampire over four hundred years old, rises from her coffin. In order to retain her youthful looks, she has three days during which she must find and thrice drink the blood of a virgin. However, she is faced with the difficulty of finding a virgin in today’s world. Twenty-one year old Mark Kendall is such a virgin. Mark is experiencing difficulty in getting his girlfriend Robin to allow him to go all the way. His friends take him to a Los Angeles nightclub where he meets The Countess and spends the night with her. Afterwards, The Countess pursues Mark in order to drink his blood the necessary three times, while Mark starts turning into a vampire.

Once Bitten was one of a host of mid-1980s films that updated the vampire into the modern day. These were among the first films to fully place the vampire into the midst of modern day surroundings, rather than around the edges as previous films of the early 1970s had done. The most successful of these was Fright Night (1985), the most thematically audacious was Near Dark (1987). In between this, there were a host of others, varying between the quite good – The Hunger (1983), Lifeforce (1985) – and the banal and terrible – The Lost Boys (1987), Vamp (1986) and My Best Friend is a Vampire (1987). Of these, Once Bitten was the lamest. (For an overview of the genre see Vampire Films).

Even as the toothless genre of vampire comedies goes, Once Bitten is excruciating. The film has about two gags to it. One involves the concept of the vampire countess needing to drink from a virgin. The end means of saving the day can be seen coming a mile off – indeed, Andy Warhol’s Blood for Dracula (1973) did it first and funnier.

The rest of the film plays on gay humour in a belaboured gag about the two friends trying to see Jim Carrey’s birthmark in the shower and spending the rest of the film scared of everyone thinking they are gay. The film also sets up Cleavon Little as a flamboyant drama queen – it clearly thinks a gag about him literally “coming out of the closet” is so funny it replays it several times throughout.

There are times the film is bone-wincingly grotesque – like the cat fight between two women that is staged as a disco dance. The film tries to paint a picture of a wild and dangerous Hollywood but the results come out laughably tame and very datedly 1980s – like a country boy’s vision of big city wildness.

These days Once Bitten is most well known for containing the first lead role of Jim Carrey, a decade before he was ‘discovered’ with Ace Ventura, Pet Detective (1994) and went onto become a $20 million+ superstar. Model turned actress Lauren Hutton plays the vampire countess – and badly. She lacks any commanding power – when she tries to act threatening, she seems puffed up, almost campy. Although there is some irony to her playing the part of a vampire countess trying to recapture her youth, as Hutton attained some fame in the 80s onwards as one actress/model who has been able to preserve her age better than others.