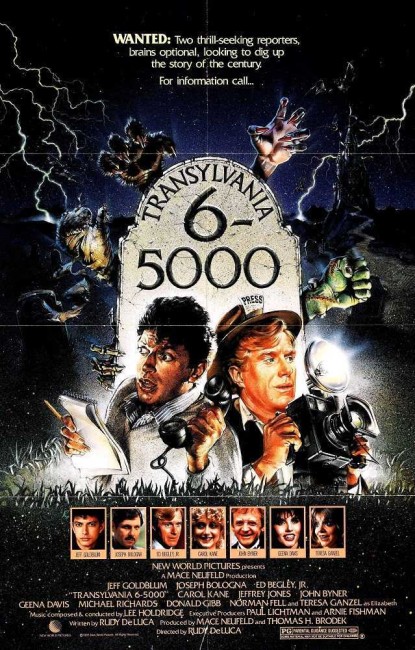 Two reporters from a sensationalistic tabloid paper are sent to Transylvania to write an article after an apparent sighting of a Frankenstein monster by some filmmakers. The weird locals treat their investigation with derision. Pressing on, they meet the sinister Dr Malovaka and discover not only a Frankenstein monster, but also a werewolf, a vampire woman and a mummy too.

Transylvania 6-5000 is a wretched would-be genre spoof that succeeds in dredging the bottom of the barrel. It was perhaps seeking to exploit the then success of Ghostbusters (1984) and was one of a number of comic riffs on classic monster movie themes that came out around the time.

It is a monster bash spoof that seeks to go back to the heyday of Abbott and Costello Meet Frankenstein (1948). However, it comes pitched at such a low level that it makes even those two idiots look the height of sophistication. The cast appear to have made every scene up on the spot in a series of inane gibberings, hysterical pantomimes and slapstick eye-rollings. The gag writing is unbelievably lame. The production values just look cheap.

Writer/director Rudy De Luca previously co-wrote the screenplays for the prehistoric spoof Caveman Mel Brooks’s Silent Movie (1976), High Anxiety (1977) and the later likes of Life Stinks (1991) and Dracula: Dead and Loving It (1995). Indeed, Mel Brooks’ Young Frankenstein (1974) is the absolute peak of this type of monster movie spoof – but Rudy De Luca clearly learned nothing from his mentor. It is hard to see how a production company could have bankrolled such an embarrassment.

There are some interesting names in the cast, including Michael Richards as a weird porter way before Seinfeld (1990-8). Stars Jeff Goldblum and Geena Davis met on the set and briefly married – what a film to remember the occasion by. The title is a pun on Glenn Miller’s famous big band number Pennsylvania 6-5000 (1940) and was also used as the title of a 1963 Bugs Bunny cartoon.