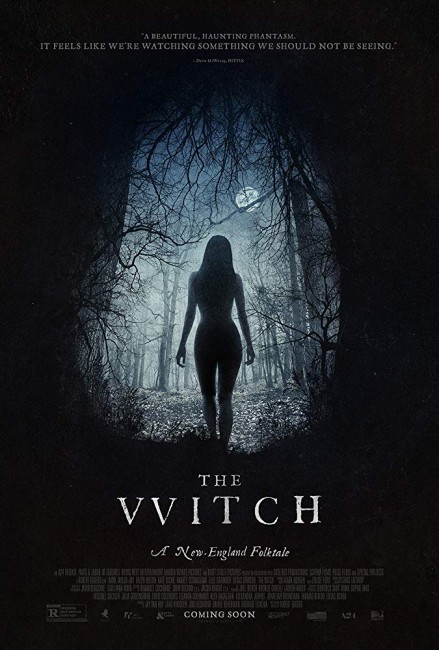 New England of the 17th Century. William, his wife Katherine and their four children leave the safety of the plantation to go and make a home in the wilderness. The eldest daughter Thomasin is tending the newborn baby near the forest only for it to disappear when she places her hands over her eyes in a game of peekaboo. Katherine is distraught but no trace of the baby can be found. They come to believe that a witch in the forest snatched it. At the same time, the crops are failing, leaving them with no food to last the winter. Young Caleb sets out to go hunting in the forest and Thomasin insists on coming – only for Caleb to disappear and then later return near death. As the situation becomes more extreme, they turn on each other with accusations of witchery.

The Witch – technically The Witch: A New-England Folktale according to its opening screen credit and often written by people as The VVitch because of its use of a double-v as a letter ‘w’ – became a word-of-mouth sensation after its premiere at the 2015 Sundance Festival. This led to a mainstream theatrical release in the US in February of 2016, a surprise given that the film is very much an indie one in its sensibilities. The film was a directorial debut for Robert Eggers.

Immediately into The Witch, you are intrigued. It is a very different film to anything you are likely to see at the multiplex. Robert Eggers and his cast have made a painstaking attempt at historical authenticity. As opposed to modern commercial fluff dealing with this era – you might point to something similar like Season of the Witch (2011), which, albeit being set three hundred years apart, has characters speaking modern English – whereas the dialogue here is King James English – all thees and thous – which leaves you having to listen carefully and interpret what is being said. (The end credits note that the screenplay and even some of the dialogue has been directly based on surviving documents from the era).

There is a sense that the film has made painstaking effort to replicate the costumes and housing that would have been authentic to the period. All of the night-time scenes, indoor and outdoor, appear to have been shot by candlelight. There is very much the sense that we have been transplanted into another time and place.

Added to this, the film frequently defies  commercial expectation. You literally have no idea – from the pacing to the characters and plot – where it is going from one minute to the next. The landscape (shot in remote parts of Ontario) has a cold, uninviting bleakness. The forest seems preternaturally haunted – you are reminded of the same world that The Village (2004) purported to exist in where the woods beyond lurked with unknown menaces. At direct contrast though, The Witch exists more inside the superstitions and fears that the family are bound by, their obsession with sinful thought, rather than the appearance of any outward menaces, which are always hallucinatory, ambiguous and quite possibly only inside people’s heads.

Robert Eggers offers up some extraordinary fantastical visions – Harvey Scrimshaw being beckoned by a witch to a cottage in the forest where she draws him into a kiss; the appearance of the two missing children to Kate Dickie who accepts them into her arms and is then seen with a crow feasting on her breast; the shadowy appearances of the deformed witch, devouring children and animals; and the phantasmagoric concluding scenes where Anya Taylor-Joy gets an answer from Black Phillip and travels through the forest to join the sabbat as they levitate into the air. The surrounding mood in the film is one of dread and fear at the manifestation of evil beyond the most brutally ascetic dedication to godly legalism.

In terms of its depiction of the period, The Witch cannot be placed in the same arena as Arthur Miller’s The Crucible (1953) or the fad for witchcraft persecution films that came out around 1970 with the likes of Matthew Hopkins – Witchfinder General (1968), Mark of the Devil (1970) and The Devils (1971). All of these are seen as critiques of the historical witch persecutions where crucially the witches are not seen to hold any actual powers. By contrast, The Witch is a film that seems to embrace the Puritan worldview. As much as it is an examination of the superstitions and crazed religious dementia of the period, it also seems to accept that what is being feared is something actual. (Although, I am not entirely sure if I followed it – for example, Eggers is never clear whether any of the family are witches or there is diabolical influence coming from some thing or person in the forest, or both).

You search for an easy comparison for the mood The Witch exudes. You might have to look to a film like Simon Magus (1999) – at least in its early scenes – or back even earlier to Ingmar Bergman’s The Seventh Seal (1957) and its acceptance of a mediaeval worldview. I was also reminded of the films of Carl Dreyer – The Passion of Joan of Arc (1928) and, in particular, Ordet (1955) and their acceptance of a harsh puritanical worldview that also contains miracles within it.

The Witch received an endorsement from the Satanic Temple when it went into general release, although the question is whether it actually upholds the views that the temple believe. After all, it is a film where one is required to accept an extreme and punishing Christian worldview in order to believe that such dichotomies work. When it comes down to it, I am not entirely sure if either viewpoint the film is divided between – self control and dedication that requires regarding the smallest selfish thought as sinful or else a surrender to corruption and orgiastic madness – could be considered a particularly appealing way to live.

Robert Eggers subsequently went on to make The Lighthouse (2019) about two 19th Century lighthouse keepers descending into madness and the Viking saga The Northman (2022).