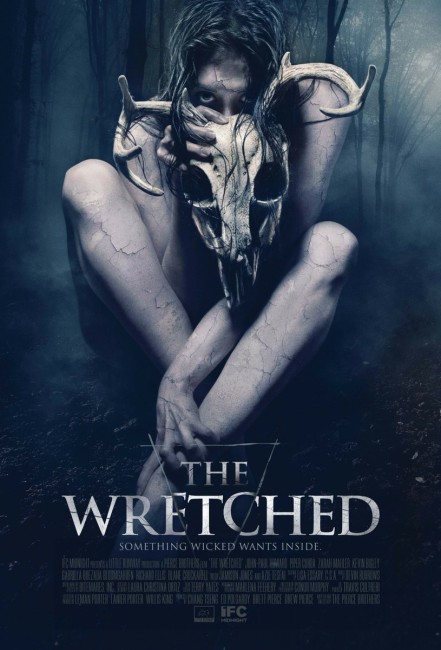 Seventeen year-old Ben Shaw goes to stay with his father Liam. Liam gives Ben a summer job at the marina he manages where Ben strikes up a friendship with co-worker Mallory. Friction is caused when Ben ditches a planned dinner with Liam and his girlfriend Sara to go to a party with Mallory. Ben sees strange things happening with Abbie, the wife next door. He shelters her young son Dillon after he finds him hiding in their house fearful and claiming that his mother has changed. Dillon is returned home but when Ben goes to his father Ty the next day asking why Dillon has not turned up for his sailing lesson, Ty seems to not even know he has a son. Ben believes Abbie has been taken over by a witch. He and Mallory spy on Abbie but when Mallory leaves a taunting note under the door, this stirs the witch up and she focuses her attentions on Ben and Mallory.

The Wretched had the distinction of being the No1 box-office film for six weeks in a row during 2020. This was an accomplishment that had only previously been held by Avatar (2009). Of course, the crucial difference with Avatar is that The Wretched was released in the US during the Corona Virus lockdown of 2020. The film only played at drive-in theatres and earned a total of $1.8 million in box-office, which under normal circumstances would make it a flop.

The film comes from The Pierce Brothers, Brett and Drew, the sons of Bart Pierce who worked as photographic effects supervisor on The Evil Dead (1981). Brett co-directed the horror comedy Dead/Undead (2002), while both brothers came together to co-direct one of the segments of the anthology Secrets of Fenville (2003) and then made the full-length zombie comedy Deadheads (2011).

I was expecting The Wretched to be a formula horror film and ended up being pleasantly surprised. The Pierce Brothers create a series of eerie and way out scares that were sufficient to make a jaded genre viewer like this author tense up in their seat on a number of occasions. Of Zarah Mahler abruptly being grabbed from under her child’s crib; creepy creatures emerging out of carcasses; Blane Cockerall watching his mother change into something else; and the marvellously sinister and threatening scene where Zarah Mahler turns up at the door looking for Blane and makes threat against John-Paul Howard.

The film is full of jolting WTF twists and scenes pulling the carpet from under us – the snatching of Mallory’s sister and the revelation of various people as inhabited by the witch (which the credits refer to as the titular wretched). There are all manner of intensely weird WTF moments – like the scene where John-Paul Howard goes over to enquire why Blane Cockerall did not turn up for his lesson and father Kevin Bigley does not even seem to know he has a son.

This leads to a big Conceptual Reversal Twist of the full M. Night Shyamalan order later in the film, which is contrived but which The Pierce Brothers pull off with more than acceptable assurance. That and a rather nasty sting in the ending. I am tempted to say this is one case where a film manages to be both a box-office hit and a surprisingly good film at the same time.