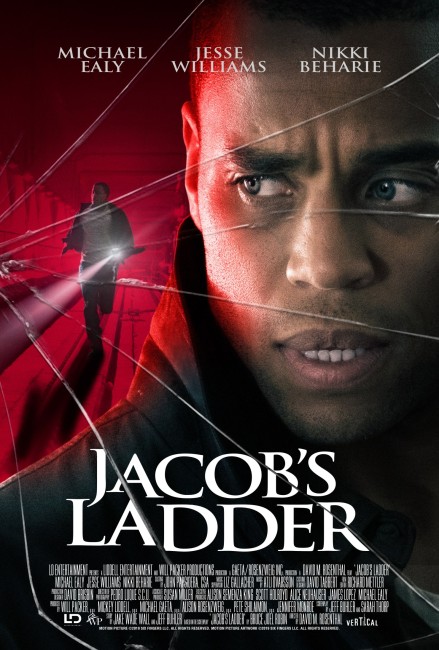 Jacob Singer served as a medic in the Afghan War and is now a trauma surgeon settled down in Atlanta with his wife Samantha and young son Gabriel. All of a sudden, Jacob begins to see other veterans that are hideously disfigured. He is not sure if what he is experiencing is real or hallucination, especially after one veteran is pushed in front of a subway car but the police can find no body. He then discovers that his brother Isaac, who was killed during the War, is alive. Isaac is addicted to a drug called The Ladder being given to the veterans by the pharmacist Hoffman. Jacob brings Isaac home but doing so causes the reality of his own life to start falling apart.

Jacob’s Ladder (1990) is an oddity. I had mixed feelings about the film when I first saw it and none of them particularly cleared up in subsequent viewings. It has some stunning imagery in terms of its tackling afterlife themes but it also sits in a script that is an incomprehensible muddle of ideas that make no real sense. The film did moderate box-office during its day and it has picked up a slow cult reputation since then with many being fascinated with its allusions and hidden meanings.

The original Bruce Joel Rubin script had sat on the Hollywood Blacklist for several years. When it finally came to the screen under director Adrian Lyne, hot off Fatal Attraction (1987), much of Rubin’s religious imagery had been muted. The finished film came out in a year that brought a sudden renewed interest in afterlife themes inspired by the Steven Spielberg’s guardian angel film Always (1989). Always performed less than expectation nevertheless the following year was filled with several high-profile films on afterlife themes with Flatliners (1990), Jacob’s Ladder and the big hit of the also Bruce Joel Rubin-written Ghost (1990).

Now, just short of thirty years later, we receive a remake of Jacob’s Ladder. Two years earlier we also received a remake of Flatliners (2017) but that fizzled out with utterly unmemorable results. The same seemed to be the case with Jacob’s Ladder. It was a remake that nobody seemed interested in. It sat in a release limbo for three years, shifting dates, uncertain whether it would be released theatrically before finally being dumped to streaming services in mid-August 2019.

I felt zero enthusiasm for Jacob’s Ladder. It seemed a remake turned out solely because someone had the rights to a product that some people might recognise rather than a project anyone appeared to have a passion for. I was equally switched off by the publicity that bandied about meaningless buzzwords like “not a remake but a reimagining”. On the plus side, it did have David M. Rosenthal in the director’s chair. Rosenthal had made a diverse range of films but had previously impressed me with his How It Ends (2018) with Theo James and Forest Whitaker driving across a terrain in the midst of an unspecified catastrophe.

The remake conducts a number of changes to the original. Some are acceptable updatings – Jacob is no longer a former Vietnam War veteran but a veteran of the war in Afghanistan. Others are streamlinings of the narrative – Danny Aiello’s chiropractor is changed to Richie Coster as a psychologist who treats veterans. The drug known as The Ladder is still present (in fact is given far more prominence than it had in the original) but rather than a drug that was given to the soldiers during the War (and before the original film’s timeframe – in fact, we never actually see the drug being administered in the 1990 film), it is actively being given to the veterans in the present as a means of combatting PTSD. (In one of the film’s more credibility-defying twists, it is being pushed by the pharmacist at the veteran’s hospital who appears to have created it himself and is running experiments without any oversight).

The biggest change is the elimination of the original’s highly confusing storyline about Jacob seeming to live two parallel lives – one with girlfriend Elizabeth Peña, another in which he has a wife and child. This is replaced by the new character of Jacob’s brother Isaac (Jesse Williams) who is introduced part way through and then appears to be taking over Jacob’s life. The film gets one good twist off about the two-thirds point [PLOT SPOILERS] in which it is revealed that The Ladder causes people to suppress their own memories and creates hallucinations in which they are leading someone else’s life and that all the time Jacob has been imagining that he is leading Isaac’s life.

In watching the remake, it is important to remember what it was that Bruce Joel Rubin wrote Jacob’s Ladder about. For him, it was a film addressing the frequent fascination with afterlife themes that run throughout his work. The original film comes peppered with afterlife imagery and references – all the characters have Biblical names, for instance. The end of the film is a deathdream ending (see below theme for examples) in which the demonic figures are parts of Jacob (Tim Robbins)’s life being torn apart as he tries to cling to it before departing into the hereafter. In the original, The Ladder experiments are blamed for the hallucinations the veterans seem to be having. But in that all of Tim Robbins’ life would appear to be an hallucinatory flash forward he is having while he is dying on the Vietnam battlefield, we have to assume that the drug is a red herring that has no bearing on the plot. (I told you that nothing in the original film makes sense).

By contrast, the remake provides various reality-blurring hallucinations but seems almost entirely disinterested in being a deathdream film. David M. Rosenthal gives us a few figures with speed rotator heads and disfigured faces but none of Bruce Joel Rubin’s afterlife and Christian imagery. The sole occasion he does so is right at the end where Michael Ealy has PG-rated sex with drug addict Karla Souza and we see her turning into an angel with black wings flapping as she rides atop him. Similarly, Richie Coster gets Danny Aiello’s famous line about “If you’re afraid of dying, you’ll see devils tearing your life away ….” but the significance of Louie as some type of guardian/guide into the afterlife has been entirely written out.

In fact, what we have with Jacob’s Ladder 2019 is really a film about drug addiction. David M. Rosenthal gives us scenes where we see the drug-addicted veterans shooting up and living homeless in a tent city in the underground. Rather absurdly we even get a scene later in the film in which Michael Ealy is fired at in a drive-by shooting as though what we have stepped into is a ‘hood drama about drug dealing gangbangers.

The eventual point the remake reaches where [PLOT SPOILERS] we learn that Michael Ealy is addicted to a drug that has erased his memories and made him think he was living his brother’s life is a complete antithesis of the first film where The Ladder drug was a red herring. Equally, the remake tries to have its cake and eat it and eventually goes off in a deathdream ending where we see Michael Ealy being wheeled off into the afterlife. As with the original, the ending leaves a massive amount of confusion as to whether Michael Ealy was a veteran following the war who became addicted to a drug that made him think he was leading someone else’s life or else all along he was dying back during the war and had a flash forward hallucination in which he led a life as a homeless veteran who took a dangerous drug that caused him to imagine he was leading someone else’s life.

The screenplay comes from Jeff Buhler who also wrote the Clive Barker adaptation The Midnight Meat Train (2008), the remake of Pet Sematary (2019), The Prodigy (2019) and The Grudge (2020), as well as created/produced the George R.R. Martin adapted tv series Nightflyers (2018) and directed the horror film Insanitarium (2008).