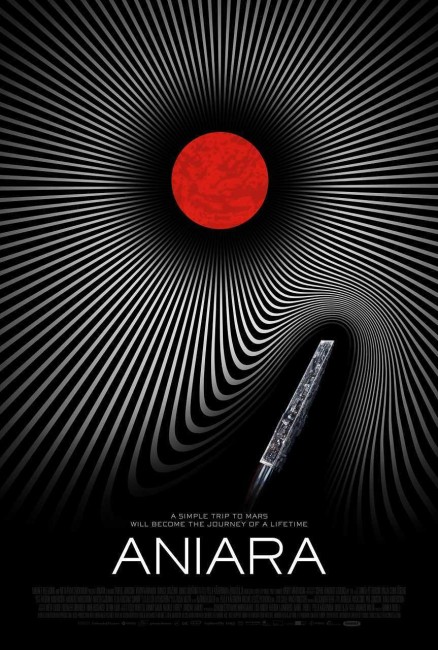 The spaceship Aniara leaves Earth to transport people to Mars on what should be a three-week journey. The ship is then hit by space debris and the engines damaged. Captain Chefone orders the ejection of the reactor and fuel to save them. This leaves the ship off course and with no means to turn around. Chefone announces to the crew that it will take two years before they are able to reach the nearest stellar body to affect a gravity-assisted turnaround. Mimaroben is a crew member that tends Mima, the empathic shipboard A.I. that is able to transport people to pleasant memories of their time back on Earth. Mimaroben finds that more and more passengers are queuing up to use Mima’s services. She expresses concern to the captain that this is overloading the system but she is too late and Mima short circuits. She also learns from her astronomer roommate that despite what the captain says there is no stellar body in the near vicinity to turn around. As the years pass, a strange cult emerges on the ship. Mimaroben is drawn in to this where she becomes involved with Isagel, a fellow prisoner who becomes impregnated in one of the cult’s ceremonies. As they raise the child together, Mimaroben tries to fight against the despair that overwhelms those aboard.

Aniara (1956) is that rarity of a science-fiction poem. It was a full-length work by Swedish poet Harry Martinson (1904-79). It is celebrated as one of the great works of Swedish prose and Martinson later won a Nobel Prize for Literature. The poem was adapted into an opera Aniara (1959) and then a Swedish tv movie Aniara (1960) using the cast from the stage version. This is a new film version from Swedish directors Pella Kägerman and Hugo Lilja who both make their full-length film debuts here.

The film keeps reasonable faith to the poem, although there are some significant changes. In the original, Mima’s death is due to it self-destructing after witnessing the nuclear destruction of its home city whereas here it is due to the passengers overloading it. In the original, the Aniara is thrown off course by collision with an asteroid whereas here it becomes just space debris in the form of a bolt. The character of the astronomer roommate is also an invention by the film.

The most noticeable difference is that the role of the Mimaroben has been rewritten with a woman whereas it has been a man in all the previous versions of the story. This is something that gives Mimaroben and her relationship with the Mima more of a resonance. The role of Iasgel has also been kept as a woman, meaning that the romance between her and Mimaroben is a lesbian one.

There are times you feel that the film skates over the surface of the sense of despair and hopelessness of the passengers during the journey, although this does sink in more as the film goes on with the end sections becoming noticeably bleak. Gradually we see hope and optimism fade with the loss of naturalism, the frustration at being unable to access The Spear, the gradual fraying of the captain’s maintenance of pretence and the rash of suicides. The film’s final shot is a particularly potent one.

Aniara is not aiming for a realistically detailed depiction of a space voyage. The spatial distances and journey times are credible, although the ship does seem to have magic anti-gravity technology. One thing that did strike me was how optimistic the theory of using gravity braking as a means of turning the ship around was. With no attitudinal jets for fine-tuning direction, there is no guarantee that using a stellar body to turn one’s course is going to affect a 180-degree turnaround as opposed to say a diversion at 90 degrees or any other angle, or even that the ship is not going to become trapped in an orbit.

The other issue that frustrated me was that the film never quite explained what the Mima was – some kind of A.I.? An equivalent of a Star Trek holodeck using memories? I was happy to go with this but the film never quite explains how or why the Mima is so empathic and why having so many unhappy people flooding in causes it to short circuit. The other piece that felt unanswered was the question of The Spear. It seems improbable that Earth would send out a probe of a material that is so dense as to prove impenetrable, leaving it as a plot element that is raised and then just left unresolved for no real reason.