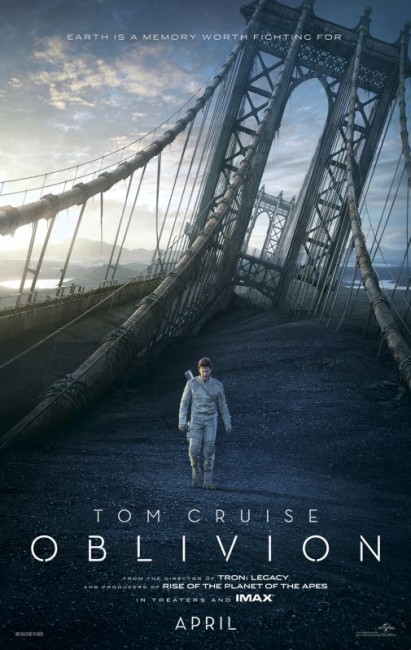 It is the year 2077. Earth has been invaded, civilisation obliterated and the Moon shattered into pieces. The remnants of humanity have relocated on Saturn’s moon Titan. The remainder are in orbit aboard the space station known as The Tet preparing to join them. Back on Earth, Jack Harper and his companion/lover Victoria repair the drones and tend the stations that harvest water for the colonists. The end of their tour of duty is nearing but Jack feels reluctant to leave. They must constantly deal with the alien Scavengers that live on the surface. The Scavengers then jury rig a communications tower and cause an object to come down from orbit. Jack defies orders from central command to investigate and recovers a body in a cryosleep capsule. He is startled when the revived woman Julia Rusakova proves to be someone who appears in a recurring dream of his. Julia insists on going to retrieve the mission flight recorder, only for the two of them to be captured by Scavengers. The Scavengers then reveal that what Jack has been told about the mission is not the truth.

Joseph Kosinski emerged from nowhere as a director worth paying attention to with the Disney reboot Tron Legacy (2010). Tron Legacy was a disappointment but it did make Joseph Kosinski into a name that people started paying attention and he has subsequently been listed on a number of high-profile projects – as one of the revolving door of directors of the long announced remake of Logan’s Run (1976), of touted remakes of Disney’s 20,000 Leagues Under the Sea (1954) and The Black Hole (1979) and of a further Tron sequel.

The work that Kosinski chose to take up next was Oblivion – no relation to the Full Moon production Oblivion (1994), which was a tongue-in-cheek Space Western, or its sequel Oblivion 2: Backlash (1996). Kosinki originally co-wrote Oblivion as a graphic novel for Radical Studios, a company that seems to blur the line between comic-book and film, both selling the rights for potential development of several of their works even before they are published and working with filmmakers to turn ideas into comic-books. The Oblivion graphic novel was never published (and has yet to appear even the release of the film) and Joseph Kosinski went on to sell the idea to Disney during the shooting of Tron Legacy, before later moving production over to Universal.

Audiences at the preview for Oblivion seemed a little puzzled, even let down. My suspicion was that they had come into Oblivion expecting one thing – the trailer highlights various scenes with Tom Cruise’s scrotum-shaped ship flying in high speed chases and shootouts with robots. What you end up expecting from the trailer is a massive scaled alien invasion/space opera type film. However, that is exactly what Oblivion is not. Certainly, said effects sequences are there – Star Wars (1977)-styled shootouts with Cruise’s ship being pursued down canyons by the robot sentinels, a big shootout in the Scavenger lair, a climactic Independence Day (1996)-like flight inside the cavernous depths of the space station – but these are not what the film is about.

Contrary to expectation, what we instead have is more of a character-driven conceptual science-fiction film. Joseph Kosinski fills it with flights across epic landscapes, images of a shattered Moon in the sky, ruins of civilisation wherever the camera turns. However, what comes through most of all is the sparseness of the landscape, how bare and empty it is. The production designers have created a world of impressively designed technology where you seem quite sure that the various flying machines, motorcycles and computer consoles could easily work in the real world.

Yet Oblivion is not a hardware film – rather Joseph Kosinski seems more interested in evocative images like Tom Cruise and Andrea Riseborough night swimming in the pool beneath their eyrie that looks like a giant glassware oven dish hanging in mid-air. In fact, the entire film is essentially only a three person drama, while most of the first half features nobody else expect Tom Cruise and Andrea Riseborough, interspersed with occasional head shots of mission controller Melissa Leo on a monitor screen. Morgan Freeman is second billed but gets a total number of scenes that could be counted on a single hand, while Nikolaj Coster Waldau gets even less in the way of lines.

The upshot of this is that Joseph Kosinski has created a film that seems filled with a palpable emptiness, not dissimilar in ways to how 2001: A Space Odyssey (1968) is a film surrounded by hardware but filled with an absence of anything happening. The effect this has is to place the emphasis on characters. Here the film has a constant mystery – the suggestion of an alien invasion of which we see nothing except the Earth’s devastated aftermath, the supposedly alien scavengers in the ruins, the constant mystery regarding who Olga Kurylenko is and why mission control seem to want to eliminate her and the other astronauts, and mysteries hinted at regarding the memory wipes.

The answers certainly prove interesting, even if somewhat disappointing. Joseph Kosinski eventually reveals that what he has been creating all along is an identity-bending conceptual science-fiction film in the vein of the works of Philip K. Dick – Blade Runner (1982), Total Recall (1990), A Scanner Darkly (2006) etc – all of which usually concern protagonists who wake up one day to make a discovery that their entire identity or the world around them has been a fabrication. [PLOT SPOILERS]. I would be interested to see which emerged first, Joseph Kosinski’s original idea for a graphic novel or Duncan Jones’s low-budget science-fiction film Moon (2009). We may never know, however Oblivion appears to have borrowed large chunks of the plot of Moon. In both films, we have a central character who has been posted on a world on maintenance duty where he is essentially alone on the entire planet. In both films, he gradually becomes aware that what he is being told about the mission by his controllers is a lie and then makes the discovery that he is one in a long line of clones who have been created for cryptic purposes.

Both films diverge after about that point – Moon has Sam Rockwell and his clone essentially in an isolation drama where the film never particularly reached any concluding act or explanation about the agency behind things, while Oblivion heads off in more traditionally heroic patterns, having Tom Cruise leading the rebels to save the world from the evil invading machines. (As in V (1983) and Battle Los Angeles (2011), the aliens have again invaded Earth for the scientifically preposterous notion of stealing our water. Given that the invaders are machines and non-biological organisms, they must have a heck of a lot of machine parts that need cooling to require so much water).

This becomes an interesting twist, yet Oblivion escapes being a great film by a hairs breadth and the fact that there was Moon preceding it. The other problem becomes the one that sank many of the Conceptual Reversal Twist films that came out copying The Sixth Sense (1999) (where M. Night Shyamalan was essentially making a Philip K. Dick-type film). And that is that the need to come up with an ingenious reversal twist becomes so far-fetched in the final revelation that the whole film collapses – particularly notable offenders here are Identity (2003), The Number 23 (2007) and Shyamalan’s own The Village (2004).

[PLOT SPOILERS CONTINUE] Oblivion is not too bad in this regard and a final flashback scene as Tom Cruise journeys up to The Tet at the climax makes a whole lot more credible sense out of the film than there had been up to that point. However, there are aspects of this where believability seems strained. I could never figure out why The Tet wants to keep resurrecting Tom Cruise and Andrea Riseborough – surely an artificial intelligence so advanced that it could selectively wipe someone’s mind, fabricate a fictional cover story for them and create a simulation of a mission controller would have the technical knowhow to maintain its own drones rather than depend on an army of wilful and unpredictable clones to do the job for it. (It seems a little like V’Ger in Star Trek – The Motion Picture (1979), which has godlike processing abilities and power at its disposal but is unable to clean some dirt off its own CPU). It also does seem a highly strained coincidence that astronaut Tom Cruise abandons his wife Olga Kurylenko in orbit in cryosleep, is captured, he then cloned and his memory wiped to be sent out to act as janitor for the invading alien intelligence, where (out of an entire planet to land) Olga’s cryosleep capsule then just happens to come down within visible view of where Tom is, he revives her, whereupon she spends some twenty minutes of the film’s running time without ever mentioning their shared past or even seeming surprised to see him again, before the Scavengers force him to undergo the Big Reveal and she suddenly announces “Oh by the way, I’m your wife.”

Joseph Kosinski next went on to make the non-genre firefighter film Only the Brave (2017), reteamed with Tom Cruise for the hit Top Gun: Maverick (2022) and the SF film Spiderhead (2022).