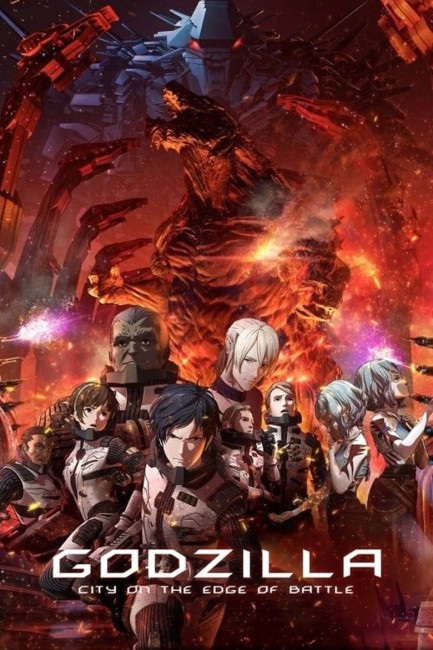 Following the obliteration of most of their unit in the battle with Godzilla, Haruo Sakaki comes around and encounters a strange native girl. She belongs to a primitive tribe known as the Houtua who worship a giant egg. Haruo and the other survivors are granted shelter by the Houtua. They also realise that the Houtua have used the nanometal left over from Mechagodzilla to tip their arrowheads. This leads them to discover the remains of Mechagodzilla, which was destroyed before they left Earth. In the millennia since they were away, Mechagodzilla has evolved into an entire artificially intelligent city. Using the access codes, they are able to reactivate and take control of the city, finding that its armaments and defences make it the perfect weapon to battle Godzilla.

The original Godzilla (1954) was a Japanese attempt to make an American-styled atomic monster movie. The film struck such a nerve that the Japanese have been making Godzilla films for what is now more than sixty years. There have been 29 Japanese live-action films, plus two American remakes, which even spawned their own series. (See below for the other Godzilla films).

Godzilla: Planet of the Monsters (2017) was a very different Godzilla film. Most noticeably, it was an anime Godzilla. Moreover, it was one where directors Hiroyuki Sashita and Kobun Shizuno announced it as part of a trilogy, which continues with City on the Edge of Battle and concluded with Godzilla: The Planet Eater (2018). As we start to see here, they have reimagined elements of the Godzilla series on a massive scale taking place in a far flung future among the survivors of humanity. As I will get to in a moment, some of the reconceptions are dazzling.

On the other hand, I felt disappointment with Godzilla: Planet of the Monsters. It seemed more space opera than monster movie and fully the first hour of the film was taken up by the various happenings among the survivors in their spacefleet in their search for a new home. When Godzilla was eventually unveiled, it never seemed as exciting as seeing the same taking place in the contemporaneous live-action Shin Godzilla (2016).

While the first film left me cold, Godzilla: City on the Edge of Battle is a far better attempt at what Planet of the Monsters was trying to do. The space opera/planetary adventure has been dropped bar a handful of scenes that cut back to the ships in orbit. The heavily armed landing expedition has been replaced by a far more interesting story set amongst the remaining troops as they try to survive on the surface of what is now effectively an alien planet. Certainly, as the survivors find the Mechagodzilla city and set about preparing it for battle against Godzilla, this does get back to more of the obsession with heavy artillery and advanced hardware that dominates a certain sub-genus of anime.

One of the things I compliment the anime Godzilla films for is their ambitiousness of plotting. While the live-action films do no more than find new opponents for Godzilla, this casts the story onto a canvas 20,000 years into the future where Godzilla has overwhelmed the planet and the human survivors face either a lonely end among the stars or reclaiming a devastated planet (one where we learn that the entire biosphere has evolved to accommodate Godzilla). We also learn that Mechagodzilla, which was destroyed before the fleet departed Earth, was built of nanometal that has evolved and reconstructed itself into an artificially intelligent city in readiness for the battle back against Godzilla. Moreover, one of the alien species that accompany humanity has decided it is their destiny to merge with the machinery of the city (I half expected at this point that they would come out as giant mecha robots).

At the same time, we can also see that the anime series is angling to usher in other monsters from the Toho canon. The introduction of the Houtua who worship a giant egg and are duplicates of each other, principally two identical girls with near-interchangeable names, seems to be conducting a set up for the appearance of Mothra. Also if you wait all the way through the end credits, there is a scene there that tips the hand for another major monster in the Toho canon where presumably the third entry in the series will become a Godzilla vs ____ film.

Like Planet of the Monsters, it is still half the film before we get to see Godzilla. This is often taken up by philosophical debates and internal monologues, or else technical and strategic discussions about how to prepare the city for the upcoming battle. Nevertheless, when the film finally gets its act together, it does so superbly. Godzilla appears and is a fearsome force, obliterating entire mountainsides with his breath, with the tiny Vulture fighters darting and ducking around trying to guide it. These scenes are every bit as exciting as the ones in the live-action films. The climactic scene with Godzilla emerging from the nanometal trap lit up in gold fire is quite triumphant. This is what the first anime film should have been.